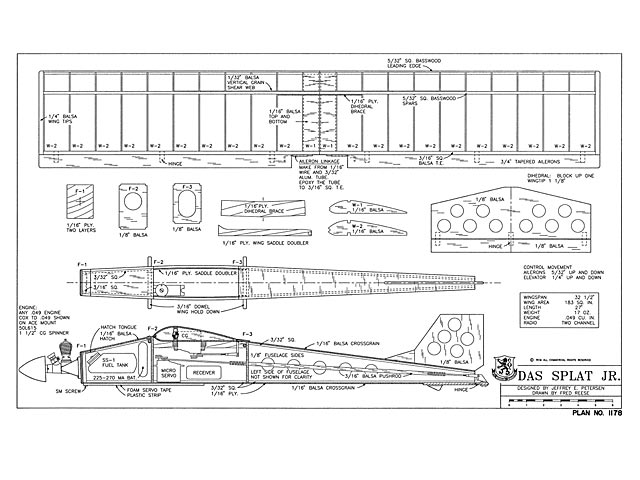 Quote: "Simple, Quick Building, and it's Loaded With Fun! By Jeffrey Petersen

Das Splat Jr is a two channel 1/2A sport plane designed for those who have some aileron experience and want something new and different. Its small size has a bevy of advantages, while giving up little in performance to the big boys. Don't expect unlimited vertical out of that little .049, but with a little planning loops, rolls, and Immelmanns are a blast!

There are many advantages to smaller planes that make them well worth the effort. For starters, they are very cheap to feed. That one ounce tank can keep you airborne for about ten minutes. That works out to about five hours per quart. Talk about cheap thrills!

They're also easy to transport. There are not many vehicles that won't hold a 32-1/2 in wing, and they're easy to take along on trips, taking up almost no space. You'll no longer have to leave old faithful at home when on that family vacation.

One thing that many do not know about small planes, at least those planes in my experience, is that they handle high wind extremely well. I've flown in winds as high as 25-30 mph, spending several minutes to travel 100 yards upwind, and making the return trip in several seconds. I'll fly the little ones in winds that I wouldn't dream of putting bigger planes up in.

They're also incredibly tough. While I've become much better at avoiding the occurrence of sudden deceleration trauma, I still on occasion have an airplane that goes, well - splat. Small planes seem to handle this much better than the larger ones. While I cannot give you a specific scientific explanation for this, I think it has something to do with kinetic energy and the ground having much less plane to stop when the two come into sudden, unexpected contact. I've snap-rolled a predecessor into pavement (Hey, I'm only human!), brushed it off, and kept on flying.

The plane pictured in this article, unknown to me at the time, had its horizontal stabilizer knocked loose in a badly aimed landing (it hit my bipe). Effectively having no elevator to speak of, the next hand-launch ended about 15 feet away with a nose dive. The only damage was repaired by snapping the spinner back on!

Okay, enough about the crashes, how does the thing fly? In a word: Great. Das Splat uses a Clarke Y flat bottom airfoil that seems to be a good compromise between a docile flat bottom wing and a symmetrical one. It is very stable and has self-righting qualities, while still being able to perform two channel aerobatics. Since that isn;t a Nelson .40 on the front, you'll have to think about your next move before yanking on that stick..." 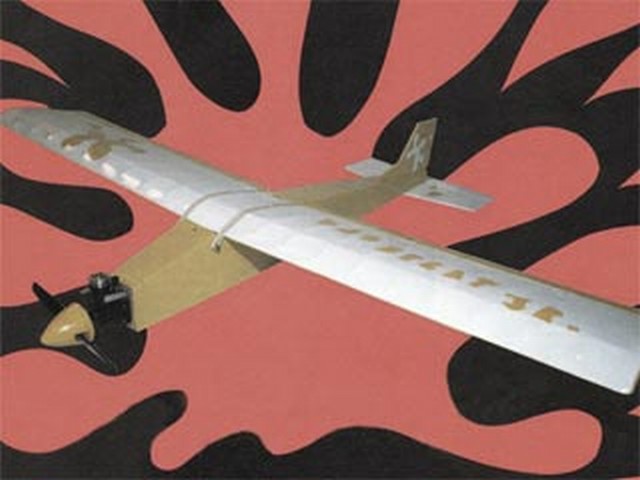