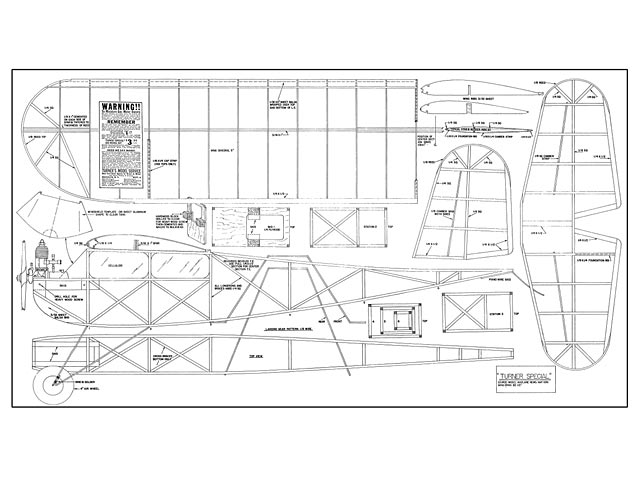 Quote: "What's so 'special' about the Turner Special? You probably couldn't find an easier to build O/T that also qualifies for Antique, and can also be a hot competitor. Turner Special, plans by Jim Reynolds.

Jim, I need to build a .40 size old timer that is big enough to do well in Limited Engine Run and Antique. One model that keeps popping into my head is the Turner Special. What the hell is a Turner Special? asks Jim. (He is a young 54 and does not know about all these good things.) Well, I said, it is an April 1936 Model Airplane News plan that would win an ugly contest hands down! Do you have a picture? asks Jim. Yes, I think so, somewhere in this pile of magazines!

Down on the floor we go pouring over the old magazines. In a few minutes we found it. Kind of ugly, we both agree. Ugly or not, I ordered the plans from John Pond. While I had John on the phone, I asked him what he knew about the Turner Special. John told me he had built one for electric power. It flew OK, but he thought the structure was kind of weak.

Two days later, the plans arrived, and Jim and I were back on the floor again. It didn't look too bad. The wing spar locations were redrawn, the elevator and rudder hinge lines were added, and a rib template was made. I started on Turner number one.

The construction went very fast. In a few days it was time to figure out where the engine mount should go. But first, what engine to use. I made a call to my neighbor George Aldrich and asked him what he could do with my whoo-pee good ten year old, but brand new HP40. He told me! George did his thing and the engine does its thing.

As the bird got closer to completion, Jim was getting more and more interested. He was beginning to drool because my construction weights are always heavy and this bird was staying extremely light. As soon as I was finished with the plans, Jim started Turner number two. Being retired, Jim had time to build all day long, and the two planes were completed on the same weekend.

My Turner weighs three pounds ten ounces, with an HP40 for power. The model was covered with silk. Three coats of dope were applied over a coat of gelatin sizing.

The use of Knox Gelatin for sizing and filling silk has been described by Dee Mathews. It does work very well. Dee, however, did not discuss the application and the mess which is created. The gelatin was mixed according to the instructions on the box. I applied the gelatin with a three-inch paint brush. You will be able to see a film all over the silk when it has filled. Be sure and do this in the garage or outside, as the gelatin will drip from the covered surfaces for hours. The end result is worth it, however, for both weight savings and cost. 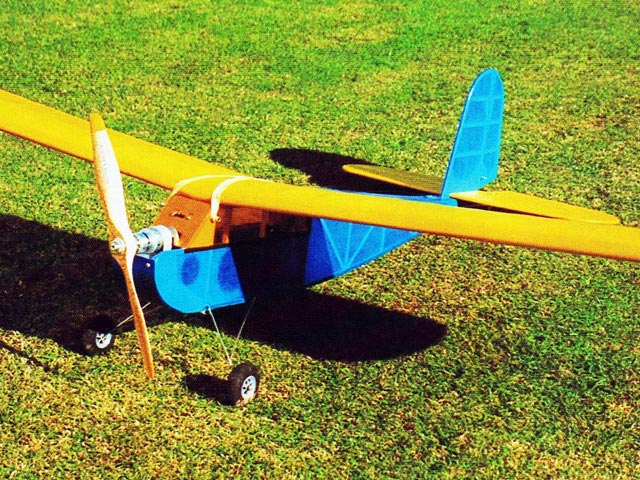 The article included should be paired with the slightly different plan that appeared in Model Builder Magazine.
https://plans.modelaircraft.org/product/turner-special-3/
Image #3 is Jim Reynolds' built from that plan. It differs slightly in construction and does not have the reflexed TE.
Tom - 06/07/2021
Agreed. Does anyone have a good clean scan of the MB plan (in Jun 1985, Kelso Barnett)? With that, we can split this into two separate listings.
SteveWMD - 07/07/2021
Add a comment