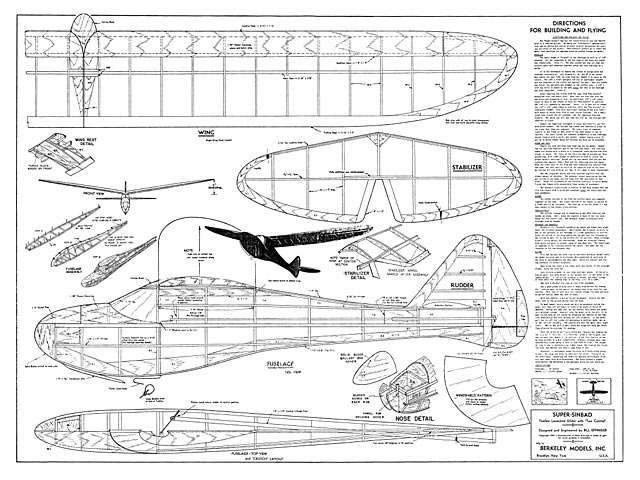 Quote: "The 'Super Sinbad' has all the characteristics that are desirable in a towline glider. By using the 'Tow-Control', maximum altitude can be safely and easily attained without sacrificing the soaring abilities of the glider. Tow-Control permits you to steer the model into position for maximum duration before freeing the model..." 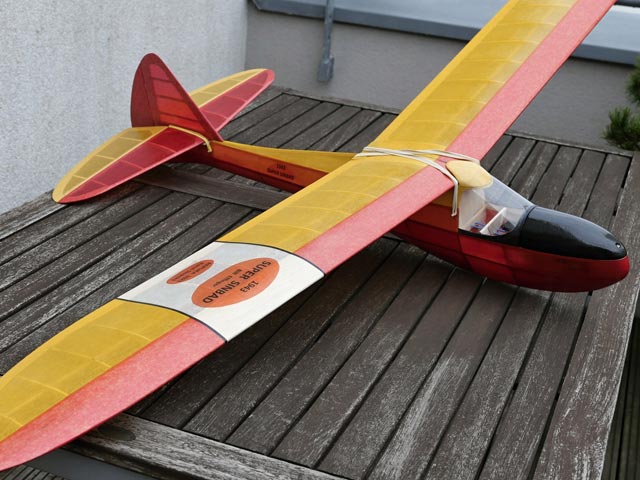 My Sinbad, built from the Berkeley kit when I was in Jr High, was not all that successful. Like all Berkeley kits, the quality of the wood and die cutting left a lot to be desired. I covered mine with the kit silkspan, including two coats of blue dope. I had never heard of clear dope, so you can imagine what it looked like. But it did glide very well from a hand launch, or when tossed from the high bank next to the football stadium. I was unable to get the towline system to work at all. It featured an additional rudder mounted on a stick below the fuselage which was supposed to drop off after the model reached the top of the tow. This allowed the small adjustable trim tab on the rudder to effect a slight left turn, while the sub rudder kept the model straight on the tow. Probably because I had my towline attached too far forward, my Sinbad wouldn't climb no matter how fast I ran. It was finally destroyed after one of my brother's less than perfect launches. I think I could get it to fly now, but it was beyond my comprehension back in the day.
DougSmith - 30/08/2015
I've seen and flown an rc conversion Super Sinbad. I don't remember if it was from the Sig or the Berkeley kit. The fuselage takes up a lot of volume and gives it some character. Very attractive in an orange covering material that looked like Micafilm. It flew ok, maybe a bit twitchy in yaw, but manageable. Not fast! Catching a thermal was pretty easy. The guy who built it winch launched it, so I guess he was able to make it reasonably strong. I've wanted a Sinbad ever since I saw the two versions in the Sig catalog. Must get around to building one. A guy on eBay was selling 150 percent, laser cut short kits for the Super Sinbad. Not sure if any are left. I think he had ones at 100 percent as well.
Lincoln - 31/08/2015
Hi Steve. The original Sinbad was designed by Henry Struck in 1941. Al least that's what the "Sinbad the Sailer" plan states. Bill Effinger had the bad habit of crediting himself with designs from other people. It happened with Joe Raspante's Snow White. Check Model Builder Magazine when the Snow White was restored from the ONLY one ever built by Raspante himself. It seems to me that this large 1943 Sinbad is just an enlargement of the original Struck design. What do you think? Best wishes
Eduardo - 31/08/2015
Here's one I built, enlarged from the plan obtained from your site [more pics 003].
DavidWartel - 12/07/2019
Add a comment