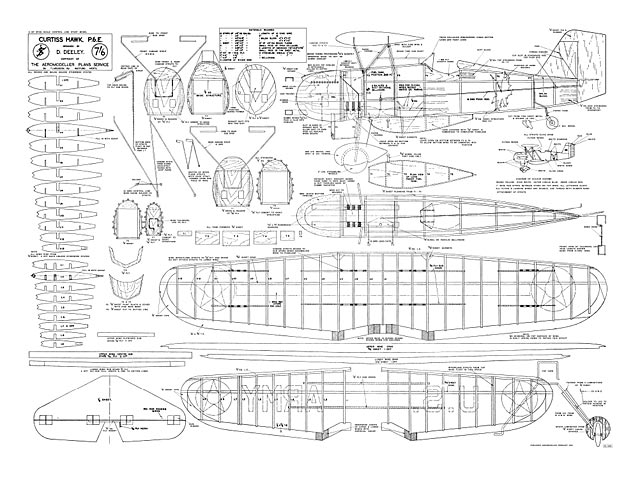 Quote: "THERE have probably keen more scale models of the P-6E Hawk than of any aircraft in history. Before the war, every other scale kit was a Hawk, and they were built in thousands in this country, let alone America. Since the war, one or two kits and plans have appeared in the States, and the machine's popularity has proved little diminished.

The trim and racy lines and simple engine cowling, added to a handy aerodynamic layout, make it a natural for a scale stunter, or, if preferred, a lower-powered concours job which can take full advantage of the natty colour-schemes used on the full-size machines when they formed the equipment of the crack American pursuit squadrons of the 1930's.

Don Deeley's accurate model was prepared from 'inside information' obtained from the States, and with a total wing arca of 412 sq in and an all-up weight of 28 oz, is a real thrill to fly. Any hot 3.5 - 5 cc motor able to swing a 9 x 6 smartly is suitable, but the model is definitely in the 'advanced' class, and is suited only to experts and those tyros willing to spend a fair amount of time building. The following notes therefore-cover only essential points.

The fuselage is constructed by cementing the former pieces to a basic 1/8 in sq box frame. Formers 2 and 3 are fitted in with the centre-section struts ready bound in place, and are followed by the bearers, bell-crank, push-rod, undercarriage, and former 1. The exhaust duct is then built through F1, and the tank and rear wheel fitted.

The wings are built in the conventional way (except that the upper one is built upside down) and the lower wing cemented in place. The interplane struts are bound to the upper wing before siting on the centre-section struts, but are not firmly attached to the lower wing.

The tail assembly is cut and sanded from 1/8 in sheet. Tissue cover complete model, adding coaming, long-range tank, etc, after doping. The model in the photograph is coloured authentically in the style of the 17th Pursuit Squadron, operating from Selfridge Field, Michigan, and full details are given on the plan. " 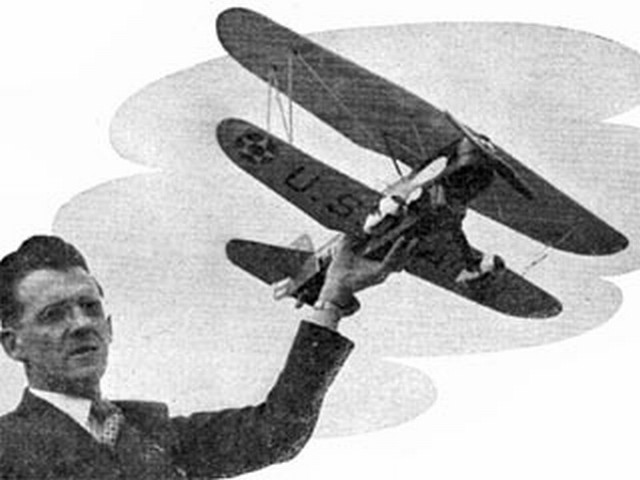