Quote: "A colourful replica of a famous US Navy fighter designed for control line flying. Boeing F4B-4, by WI Barrett.

THE Boeing F4B-4 is one of America's most famous biplanes, and is an ideal prototype for a small C/L model. For those who like decorating their models in various colours, this one needs some beating. The colour schemes used by the US Navy and US Marines on their Boeings give ample scope to the dope dauber! The general Navy scheme can be seen in the photographs of the model. The wings are generally silver, with the top surface of the upper wing chrome yellow. Fuselage, struts and undercarriage are light grey, and the tail surfaces white. The cowl, formation 'V' and fuselage band are red. Lettering is in black.

The construction of the model should present no difficulty to the average modeller, so if you are ready to go, make a start with the engine bearers and front formers. With the engine bolted in position, the formers can be cemented to the bearers, then when this unit has dried, bind the undercarriage in place, and add the bellerank assembly.

Next cut out the keels and . add the remaining fuselage formers, positioning the fuel tank between formers E and F. This will form an ideal platform for the dummy pilot.

The tailplane and elevator assembly must then be added and linked up to the bell-crank. With the fin and rudder cemented over the tailplane, the model is ready for planking. Do not forget to mark the wing strut positions when the planking reaches former K.

After sanding the fuselage, the dummy engine and cowling can be added. On the original model, the cylinders were produced by turning a piece of suitable dowel in a chuck and marking the fins with a 20 tpi chaser. The grooves were later deepened with a fine razor saw. If this method is beyond the builder, an alternative method is to wrap cotton round the dowel to represent the fins. Push rods are made from pins.

The wings are of simple construction. After cutting out the sheet base, the ribs are added, together with the leading and trailing edges... " 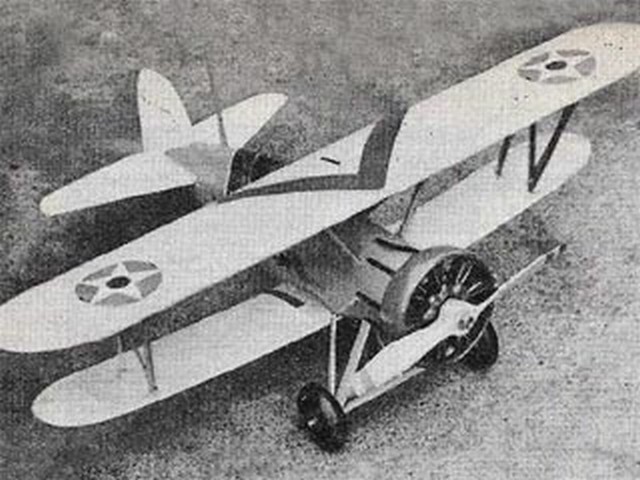