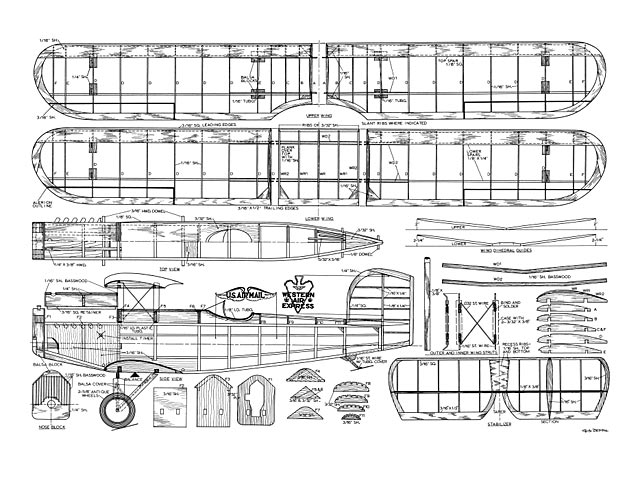 Quote: "Man-sized free flight recalls the days of helmets and goggles and wind in the wires. The Douglas Mailplane, by Gabriel A Bedish.

THE INAUGURATION of the Air Mail Service over 40 years ago was an epic event which foreshadowed commercial air transportation. Men and machines of the United States Postal Service began to fly hazardous schedules almost regardless of weather. Before the days of crude beacon lights, pilots were guided at night by bonfires. One of the first commercial carriers was Western Air Express; its initial airplane was the Douglas M2 Mailplane (see p 28, Dec 1969 AAM, 'The Douglas Mailplane,' by Paul R Matt, for detailed drawings).

Since biplanes are outstanding performers, the balanced design of the M2 prototype makes for a fine-flying model. Fidelity to scale has been maintained, with several small exceptions. Power ranges from 09 to 12 displacement.

Construction: The model is designed in three assembly units: wing and main landing gear, fuselage, and tail unit. The ship can be disassembled for more sensitive adjustment, since slight incidence changes are needed for varying winds. A removal lid provides access to working gear inside the fuselage.

General building suggestions are as follows. For a strong and warp-resistant model, use only the balsa specified. Do not force oversize parts into the framework during assembly. When the assembled unit has been removed from the plan,.go back over all joints with cement. (I fmd Duco cement produces strong joints.)

Fuselage: Assemble the simple box frame with its cut-out lower wing mount, then build both sides from hard balsa simultaneously over the plan. After the side panels are assembled and the joints dry, thoroughly moisten the curving longeron and allow it to dry. This prevents the straight upper longerons from taking on a slight bend. Remove the sides from the plan and put in the upper and lower horizontal crosspieces. Cement the rear uprights together and install the set of crosspieces to the rear. When that joint has dried, put in the next set and so on.

With the main frame finished, attach medium-grade sheet balsa formers and the adjoining stringers. Attach upper balsa covering panels and balsa planking as specified. The cockpit cover, which is built in two half-size pieces that meet lengthwise in the center, is moistened before it is attached.

Lengths of dowel are securely cemented in place to ancher rubber bands for mounting the wing and tail units. A tail skid is bent to shape and then put into the fuselage with a strip of plywood to hold it in position.

Insert the nose end pieces which carry the motor mounts and then cement them in place. Plan spacing is for an O.S. 09 engine; although this model will take up to a 12. Drill mounting bolt holes with a slightly undersized bit so that when the bolts are screwed into position they will be tight. Shape and attach the lower balsa block nose piece. Put the upper access lid together and shape. Basswood ends and balsa retainers are added to insure a snug fit..." 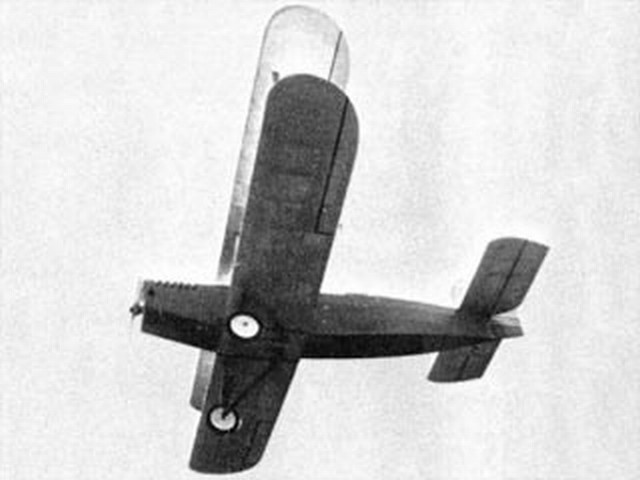