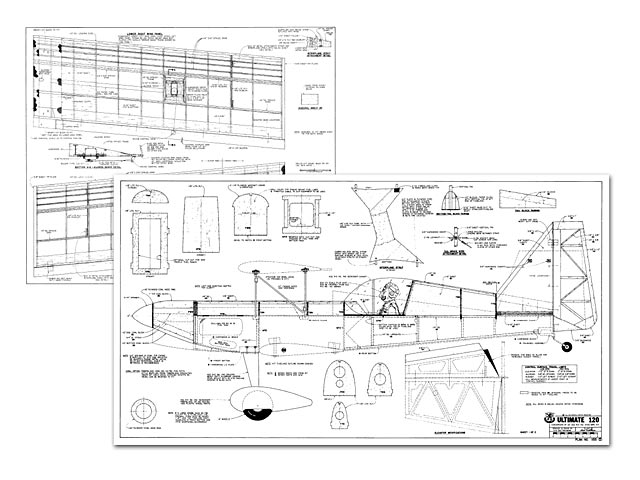 Ultimate 120 (Ultimate 4-120). Radio control sport model. This is a plan that details how to modify a kit.

Quote: "The Ace R/C 4-120 bipe has been called the most 'bashed' kit ever. That well may be, and the reasons are pretty obvious: the design is completely straightforward, it seems to fly well regardless of how it is changed, and it builds quickly and straight.

When the flood of Ultimate Bipe kits and designs hit a few years ago I, like so many others, was attracted to this awesome biplane. After checking through the various available models it suddenly hit me 'why not rework the aesthetics of the 4-120 bipe kit to resemble an Ultimate?'

A few hours spent at the drafting table playing with a pencil on some Clearprint taped over the original kit drawings, convinced me still another 'bashing' was well within the realm of practicality. I then cut out the required new pieces and conned master craftsman John Walker into building from my drawings.

A month or so later the model was delivered and flown. John has actually had other modelers accuse him of 'putting them on' when he tells them our Ultimate 120 is a modified Ace kit. So what we have here are some really simple modifications to a stock 4-120 bipe kit, resulting in a big model that bears enough resemblance to an Ultimate bipe to be instantly recognizable.

This 'bashing' utilizes nearly everything in the kit while retaining the nearly idiot proof cabane mounting jig and other really neat features of the original concept.

This project was drawn up with no intent of publication, but while flying mine over the last two years a surprising number of modelers have asked for copies of my drawings. There are now at least four other Ultimate 120's flying that I know of, all with enthusiastic reports. So, I've decided to share the project with you..."

Update 1/12/2021: Replaced this plan with a re-scaled version, thanks to balsaworkbench.

Quote: "I started drafting parts for a kit of this plan oz6958 when it became apparent that the scaling was way off. Specifically, I noticed that the fuselage side was depicted 1/2" longer than the size of a 48" sheet of lite ply that it's supposed to be cut from.. Also, the airfoil size didn't match from one sheet to the other. So I used the drawing of the tire and the stated chord and span dimensions to rescale the drawing to what I believe to be the correct dimensions.

Some drafting errors complicate the matter. For instance, after rescaling, I traced the airfoil for the bottom wing on the fuselage plan, and the total length is 11 inches. This would include the leading edge, the rib, and the trailing edge stick, even though it is drawn as an empty airfoil. Starting at the leading edge on the wing plan, 11 inches takes you only to the tail end of the rib, and the 1/4" trailing edge stick is in addition. I believe that this is a drafting error rather than my own scaling error, because I got the size of the aileron and other wood sticks right, and the final dimension agrees with the stated chord and span in the RCM article. Furthermore, I know there are drafting errors because the top wing chord is significantly shorter than the bottom.

Sorry for the long ramble, but I think this should help scratch builders who want to tackle this project. I'm attaching my rescaled version of the plan, which I believe to be as faithful as possible to the original in size but also contain the original drafting errors. " 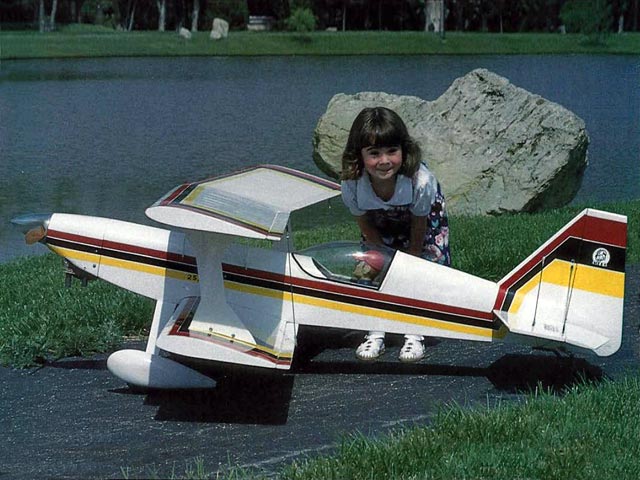 There is no wing rib templete in plans
dvines - 13/10/2016
Good point. The subject of this article and plan is the modification (kit-bashing) of the Ace kit, so I guess they assumed anyone starting the project would have the full set of ribs beside them, in the kit box. But it's a fair point. Does anyone out there have a drawing of the rib template we can add to this plan? Thanks.
SteveWMD - 13/10/2016
The 4-120 Bipe from Ace is an enlarged version of the 4-40 Bipe plan on OZ. Any competent builder should be able to enlarge those ribs to the correct size, at least close enough.
DougSmith - 13/10/2016
The airfoil outline is shown in the fuselage side view, and the locations of sticks, spars and sheeting are shown in the wing plan view. That's all you need.
Rob Reynolds - 19/11/2021
Add a comment