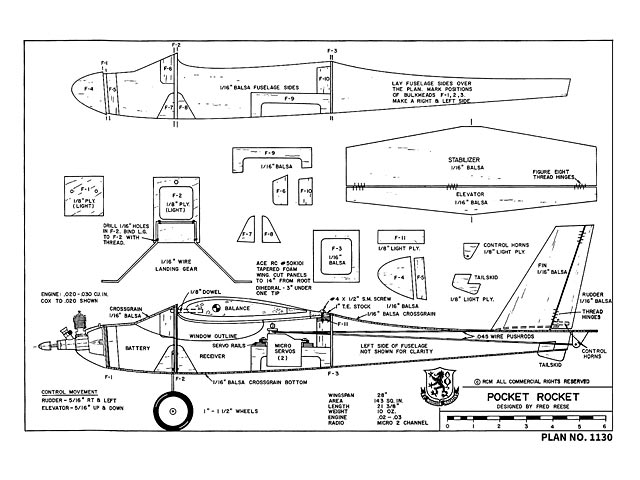 Quote: "The Pocket Rocket is an exciting little 2-channel sport model designed for the Cox TD .020 engine and micro-sized servos. It is quick to build and a blast to fly. By Fred Reese

What I like best about little airplanes is that they can be flown anywhere and anytime. They do not need elaborate support equipment, just a NiCd starting battery and a half-pint of fuel. The airplanes will fit in a 6 x 10 x 30 inch cardboard box for travel, so they don't even take up much space. But, best of all, they are a blast to fly.

When I said anywhere, anytime, I meant it, The Pocket Rocket is hand launched into the air, and any little patch of smooth ground will serve to land it. Wind is not really a factor to fly. Many times while I lived in Wyoming, our fly-in meets would get blown out in the afternoon. So, while the guys were tying down their big binds. I'd get out my little .020 airplane and fly.

I built my first .020 powered RUC model back in 1969, a 30" Sterling Piper Cub. It used a Pee Wee .020 and an Ace R/C pulse rudder control system. I flew the little Cub a lot, and eventually built a second Cub from the plans using sheet balsa for the fuselage and tail. Covering was silk and dope and power was a TO .020 engine. Control was still the Ace RIC rudder only system. The second Cub flew much better than the first

with the more powerful engine. I followed the Cub with a Guillows 24 in Fairchild Ranger 24 with the same TD .020 and Ace R/C radio. This model was hot! in the early 70's, Phil Kraft's Ugly Stick (oz5175) was very popular and it was being built in several sizes, l built my Littlest Stick (oz2331) a Cox TD .010 rudder-only version with a wingspan of only 19". The plans were published full size in RCM and Ace R/C is still kitting the model, 20 years later.

In 1982, I doodled a funny little airplane while talking on the phone and then built it. I called it Buttercup (oz5779) because it was covered with yellow MonoKote. It was cute, and it was the best flying little airplane to date, Power was a TD .020 and it used the new Ace R/C micro servos and a 100 mA battery pack. This is the airplane that I flew in Wyoming and it is still flyable after hundreds of flights. Buttercup is pretty tired and the engine is worn out, so I designed Pocket Rocket to replace it.

The wing of the Pocket Rocket is a shortened Ace R/C tapered mini-foam wing. I have used this wing many times in the past, full sized for .049 models, but at 35 in it is too big to give spirited performance with a .020 engine. My first Pocket Rocket had a wingspan of 26 in, the same as Buttercup, and did not use trailing edge stock on the wing. It flew, but it was touchy and would snap roll if it was slowed down at all. A second wing was tried at 30 in to reduce the wing loading, but it wouldn't fly at all. With this wing, the model snap-rolled into the ground the instant I moved the elevator control.

As I thought about it, I realized I had run into this in the past, but always assumed it was my design that was at fault and never considered it to be the wing. But now I was totally perplexed, this model did fly, so I began to test wing panels. I found that the molding process caused some of the wings to be thicker than others. I taped a row of pieces of thread along the high point of a wing panel and held it out my car window, changing the angle of attack while driving slowly. It clearly showed that the wing stalled at the tip, before the center which explained the tip stall, snap roll, and crash syndrome.

The trailing edge stock provided other benefits as well, the radio compartment is now 3/4 in longer and it is easier to get everything inside and balanced. I also lengthened the nose and tail a little on the second model, making it a little more graceful looking. Flying the Pocket Rocket is just plain fun. It can be flown in small areas and though it appears to be going very fast (because of the size), it actually has a top speed of only 30 to 35 mph based on prop pitch and engine rpm. Handling is very solid, smooth, not at all twitchy or sensitive, and is really very easy to fly. When I let others fly the Pocket Rocket, they quickly relax and the usual comment is, 'Oh! This is nice.' They then proceed to loop and roll it around the sky..." 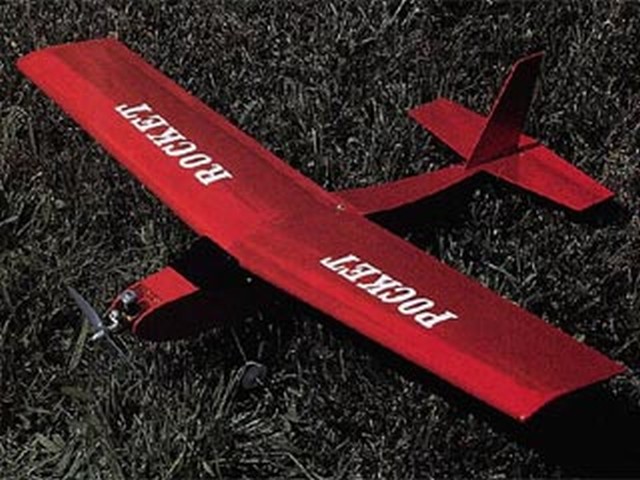 Hello Friends, I am writing again from Argentina, this time to share images of my Pocket Rocket built from the plan published on your page [more pics 004-006 and https://www.youtube.com/watch?v=oz8_lLKkfUQ]. Thank you very much!
MauricioBertello - 28/06/2018
How are my friends from the United Kingdom!... a pleasure to make contact with you again. This time I send photos of a Pocket Rocket model from plans, to which I put a G-Mark engine .03 and has 4 channels [more pics 007-009]. I hope you like it. Engine G-Mark .03 R/C in action: https://www.youtube.com/watch?v=23RtWFUCS0w Strong hug from Argentina.
MauricioBertello - 13/11/2018
Add a comment