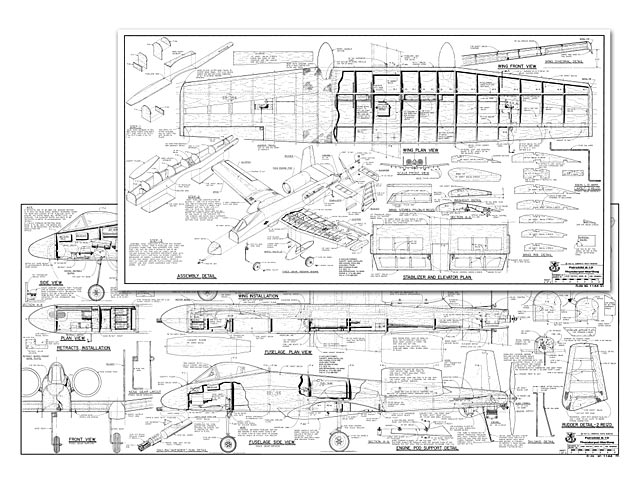 Quote: "Tired of the same old 'look alike' airplanes? Then give this Sport Scale pusher a try, it's sure to turn some heads!

I have always been fascinated by the A-10 Thunderbolt (or Warthog as it is often referred to). Although it is somewhat blunt and prehistoric looking compared to the sleek, fast, front line fighter jets, it is definitely a functional aircraft. Designed to carry its 30 mm gatling gun in the nose, this tank killer played a very successful role in Desert Storm. It was news reports from Desert Storm featuring the A-10 that peaked my interest in this aircraft and inspired me to take on this project.

As you may recall, I built a pusher version of the F/A-18 that was featured in the April 1991 RCM. I am sold on the concept of pusher prop propulsion as a cheap and hassle-free alternative to ducted fans, but deplore the thought of powering any jet model by installing an engine on the nose. It is somewhat ironic, therefore, that this model started out on the drawing board having an engine up front! My original assumption was that there would be insufficient prop clearance in a pusher version of the A-10.

Fortunately, my dislike of 'tractor jets' won out and I prepared a side view sketch of a pusher version before proceeding with my original design. It soon became apparent that pusher propulsion would probably work. There appeared to be adequate prop clearance after all and it seemed that the balance point could be achieved by putting the radio gear as far forward as possible. It was clear, however, that the fuel tank would need to be located at the Center of Gravity to minimize the amount of nose weight needed.

I wanted the outline of the airplane to be very close to scale with a slightly enlarged wing and stab to enhance flyability. For ease of construction, I chose a thick, flat bottom airfoil instead of an undercambered one as on the real A-10. Of course the outer wing panels had to have some washout.

Prior to starting construction, I set out to find a suitable canopy and 'things' that could be used for the fake engine pods. Unfortunately, I could not find a commercially available canopy that was close to scale nor could I find any good pods. I considered using plastic bottles or tubes but the items I could find were either too small, too large, too heavy, or too flexible, and none of them had the right shape. Remembering the excellent quality and exact scale shape of the canopy I had ordered from Bob Holman Plans for my F-18, I called Bob to see if he could produce scale vacuum-formed components for my A-10. He said he could and within three weeks I received a set of scale engine pods, wheel nacelles, and a canopy - all custom made for my A-10!

The plastic parts were even better than I had hoped. The canopy had the panel lines molded in and the pods had a scale looking rounded inlet. The pods and nacelles had to be assembled, but the parts fit perfectly and this was easily accomplished. (Using plastic cement, I glued a 3/8 wide strip of scrap plastic along the inside seams. When dry, I filled along the outside seams with glazing putty.)

Bob has agreed to make all of these components available at a very reasonable price. (Bob’s address and phone number are included in the material list.) I highly recommend these parts as they will save you a lot of building time and are well worth the money. After receiving the vacuum formed parts, the model was completed in approximately two weeks of rather steady building. It went together very easily and, when completed, looked even more realistic than I had envisioned. I opted not to install retracts but it was obvious that they could be incorporated into the aircraft with some modification (the plans show retract installation and I have installed them on my second A-10)......" 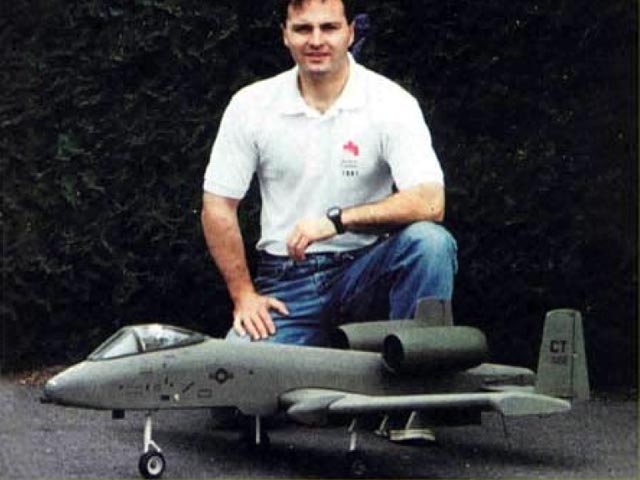 Hello Steve I'm Massimo, few years ago I built this model and it flies greatly. I incorporate some modifications: The front gear is shifted laterally like the original one the engine pod have a positive pitch and the tailpane has a negative pitch to compensate the engines. Best Regards,
Max - 27/08/2015
Add a comment