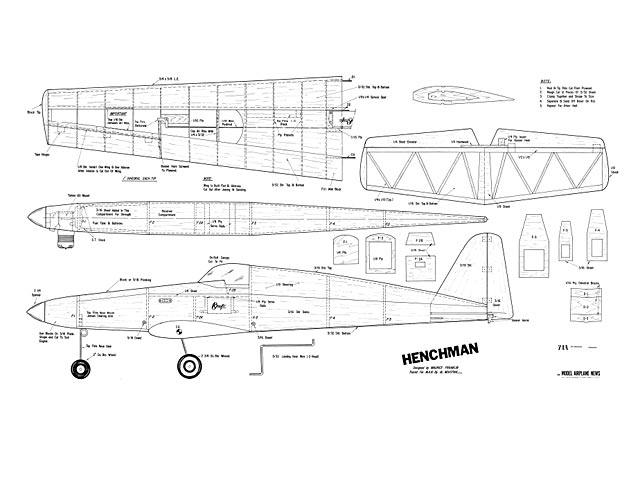 Quote: "Looking for the multi machine that can do the whole bit for you and still have a margin for that little extra? Yes? Then build the Henchman as it offers good pattern performance and then has the advantage of superb knife-edge flights for tip score.

The general idea of the Henchmen was to come up with an airplane that would be different from the run-of-the-mill stunt planes and still perform with the best of them, if not better than most. I'm very pleased to say that it has turned out better than I'd hoped.

The fuselage side view was drawn to be as scalish as it could, keeping in mind ease of construction and installation of equipment as well as lots of side area for good knife-edge flying. I wanted to keep the weight to a minimum so I removed all the plywood l could, No matter how strong one builds a plane, if it goes in some things have to give and all the plywood in the world just won't stop it from bending.

I decided on a taper wing as I like its looks; in windy conditions, it always seems to fly so much better than a straight chord wing. The Henchman wing is built flat on a building board, joining the two halves in the usual manner for dihedral. Wing section used is a good all-round performer giving very low speed handling characteristics and high speed flying with no zooming tendencies at all.

Motor used is a 60-size engine Enya, any good 60 engine is recommended. It's always nice to have lots of power to play around and the Henchman, using a 11 x 6 flower-prop (thin blade type) will climb vertically out of sight with no sign of falling off, I also use a Fox glow plug which seem to last for-ever. Several Henchmen have been built by the local flyers, all of them seem to perform very well with power plants ranging from .45 to .60..." 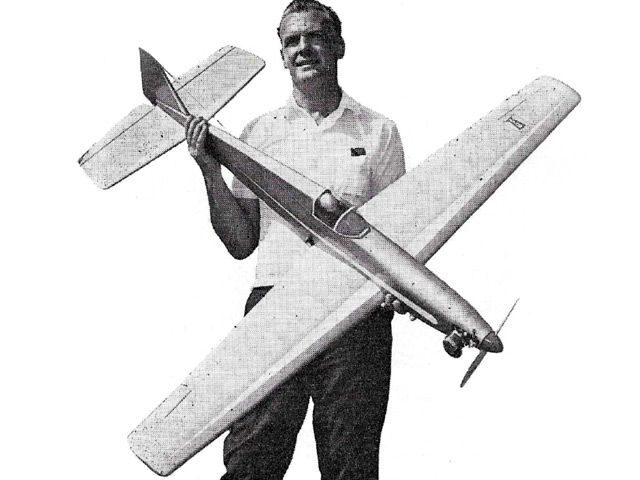