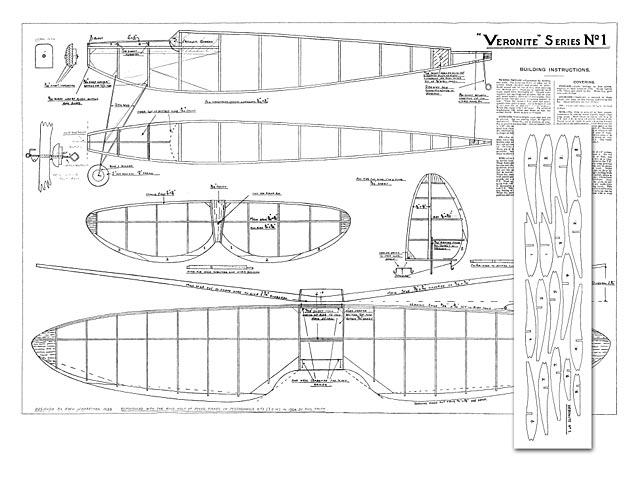 Credit on the plan says quote: "Designed by Jack Leadbetter 1939. Reproduced with the kind help of Peter Fisher of Performance Kits (IoM) in 1984 by Phil Smith." 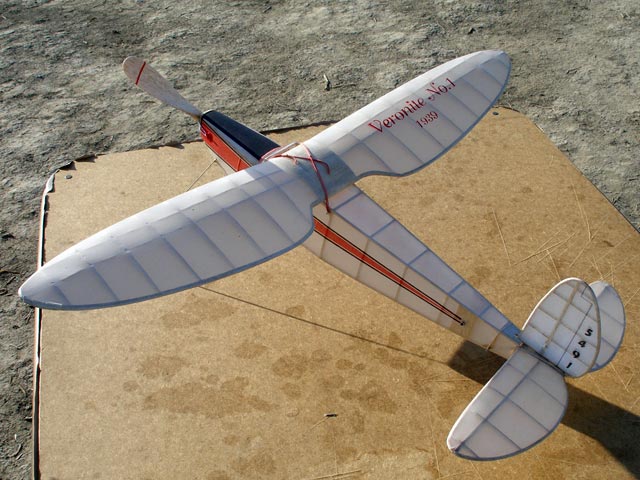 A couple of people have been in touch to share this superb photo of with us (thank you Pascal & ColinBaxter). It's from the Imperial War Museums collection, and shows "Ginger" Lacey, one of the top scoring RAF fighter pilots of World War II. The model Lacey is working on has been confirmed as the Veronite No. 1 and I thought it would be nice to include the photo on the plan page. To find out more about Lacey and his career, his Wikipedia entry is a good place to start.
Mary - 25/07/2017
The photo caption is "Lacey works on a model aeroplane in No 501 Squadron's dispersal hut at Colerne on 30 May 1941". Hard to believe that at this point, Flying Officer Lacey had already downed 23 enemy aircraft.
ColinBaxter - 25/07/2017
For me the star is the man in the picture. A real legend of RAF Fighter Command and one of the "The Few" who saved Great Britain in 1940 and maybe the whole World. Greetings from Luxembourg.
Pascal - 25/07/2017
Added this fascinating 'colourised' version of the Ginger Lacey photo, thanks to Pascal. Copyright belongs to www.colourisehistory.com
Mary - 14/08/2017
Hello, My name is Ian Easton, I built a Veronite No1 a while ago and it flies beautifully. I thought you might like a photo of mine for the web page [main model pic plus 007]. Regards,
Ian - 06/12/2019
That's a very pretty model, many thanks.
SteveWMD - 06/12/2019
It is worth noting that the model Ginger Lacey is holding and that made by Ian Easton have diagonal bracing members in the fuselage which are not shown on the plan. Also, Ian Easton’s model has two spars on the top surface of the wing which are not on the plan.
Barry Nelson - 02/07/2020
Add a comment