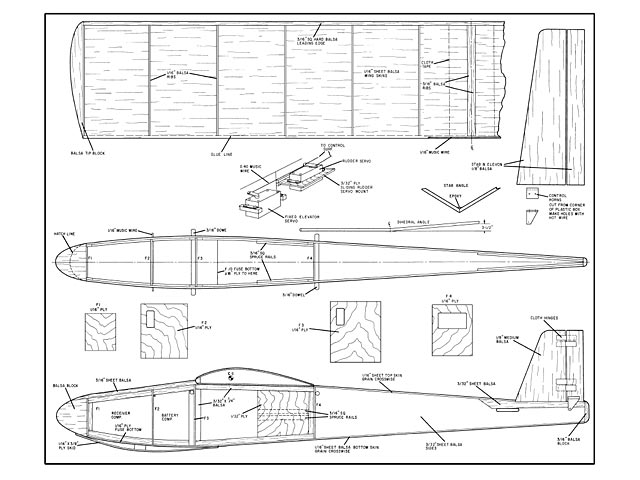 Quote: "The Little V is an easy to build miniature slope soaring glider. It sports a 36-1/2in wingspan and weighs a scant 15oz with two controlaire S-4 servos and a 225 MA battery pack.

How small can a slope soaring glider be? I really don't know, but the Little V was inspired by a model of a similar configuration built by young Steve Woodward of the Cordova Model Masters, and it has a 26in wingspan. Steve's little bird flew with such great success that I just had to try one.

These tiny gliders require moderate to strong conditions to keep them airborne, and flight test have proven that a 15 mph plus wind over a good slope will do the job. A 42in wingspan (add two extra wing ribs) would be ideal for more moderate conditions. The model was first flown with a single channel pulse rudder only system and a Rand actuator, which worked very well. The Galloping Ghost rudder and elevator linkage as shown for the Lil Toad (oz5897) in the Feb 1969 issue of RCM should also prove quite practical.

The construction is very simple and requires little explanation. The wing is skinned top and bottom, Ken Willard anti-warp style, and is quite light and rugged. Use 1/16 medium balsa for the skins..." 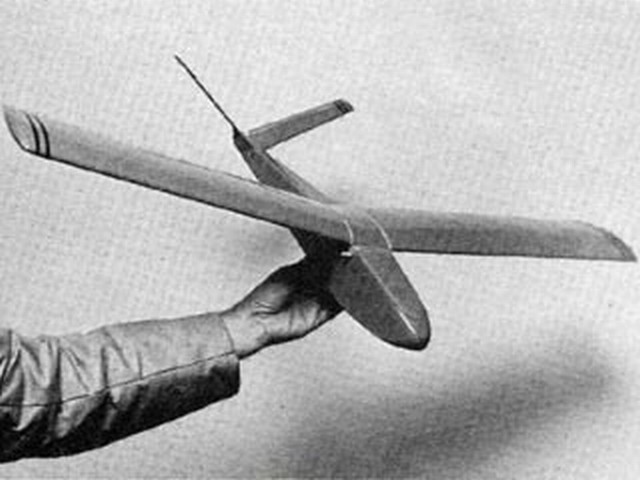 Here is a photo of my Little V [see more pics 003]. I built it from your plan. Please feel free to use photo. A great little flyer and so easy and cheap to build. 5 stars. Thank you.
RonBuckwell - 28/02/2016
Hello Steve! I just wanted to show you some pics of some planes I built from plans available at Outerzone. This is Little V Glider, built in Feb and March 2016 [more pics 004-006].
Sebastian - 27/04/2016
The user photos and comments are more than enough reward for the time expended cleaning and repositioning the bits on the original plan.
Circlip - 28/04/2016
Little V built to the plan from Outerzone [more pics 007, 008].
Al - 28/04/2017
Little V is a lovely plane and a nice easy build. It is a pretty good flyer for a "ruddervator" v-tail, once I'd used the designed dihedral. I built it too flat at first for the rudder to be effective but after test flights showed the problem I sawed the wing in two and re-joined it with the correct angle and it now turns well. It's robust, too, as it's easily survived some harsh landings on the South Downs. My only I wish is that I had added a ballast box under the servos as penetration could be better. My photos attached for the web site of the plane and my take on the sliding servo tray [more pics 009-011]. I tried to copy covering design of the original but used tissue and Ezedope instead of solarfilm - so perhaps even more retro than the original? So, thanks for putting this plan on Outerzone!
PeteNewman - 18/09/2017
I build a V tail glider, very similar in size, back in 1974, plus or minus a year. Mine was covered with silk and dope on the fuselage and the wing. The wing had several more ribs than the current plan. Mine, unfortunately, never flew BUT I do still have the model although it does need to be recovered.
Bob Blubaugh - 22/05/2019
Hello, I just finished making a foam board Little V glider using your plans! I would like to submit these three photos of it [pics 012-014]! Thanks,
Charles Kotasek - 05/01/2021
Add a comment