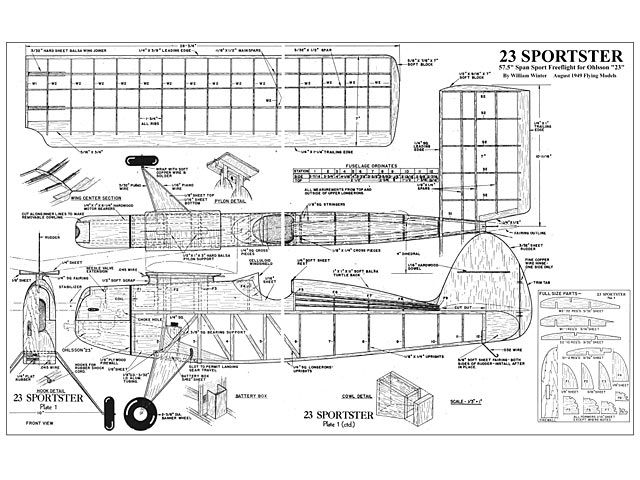 Quote: "IF sport flying is what you're interested in, this new, differ-ent free-flight plane is right down your alley. Get out your '23' and start building!

Free-flight gassies have become such temperamental critters that you rarely see anyone flying them just for the sport of it. Who would fly a modern contest design except at a meet or for testing? Chances of a good bash or an out-of-sight flight are too great. But why write off free-flight for everyday flying when a sport model can be so much fun?

The '23' Sportster was designed around the popular mass-produced Ohlsson of that displacement. It is as large, and as small, as practical. Spanning a shade under five feet, it is about as small as you can go and still have sport performance from a good '23.' Anything larger - and the Ohlsson will fly a ship that is plenty bigger and heavier - would be impractical for most builders, Few people like to transport clumsy airplanes and, besides, materials cost a small fortune.

The wing area is approximately 400 square inches, and gross weight is about twenty-seven to twenty-eight ounces, complete with two coats of clear and three coats of colored dope. This works out to a power loading of roughly 120 ounces, or a bit higher than the rules require for contest air-planes, and to fourteen ounces wing loading, considerably higher than anything flying today. The result is a ship with fairly good power performance by any stand-ards and a somewhat fast glide that isn't apt to flirt with thermals or lead you on a chase across county.

It would be difficult to cut down more on the power performance without increasing the size of the airplane or stepping up the gliding speed disastrously, but the builder can throttle back to keep the ship within the limits of his surrounding terrain. Outside of the usual and necessary fore-and-aft trimming for adjustment, you should resort only to mild rudder movement for controlling the flight path.

The original airplane uses conventional ignition with an Aero-spark coil and a Burgess battery pack. While glow ignition may he used, we didn't use it for the orig-inal model because, without coil and battery weight, performance would be stepped up too much. Also, a glow plug does not afford the degree of throttle control re-quired for cruising flight. Finally, by using standard ignition, you avoid the necessity of hot-fuel proofing your plane.

A most unusual feature of the 23 Sportster is the large di-ameter propeller -a 14-inch Flo-Torque. Yes, we know the prop is too big for the engine, but we want realistic performance..." 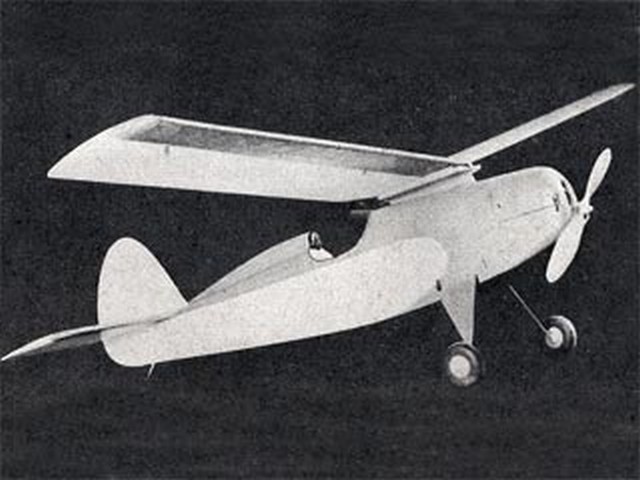 Hi guys, finally flew my sportster, and thought you should have some pics [more pics 007, 008] as the plan was downloaded from your fantastic site. Thank you for making so many obscure plans available, and for all your hard work. It really is appreciated :)
Al - 01/05/2017
Add a comment