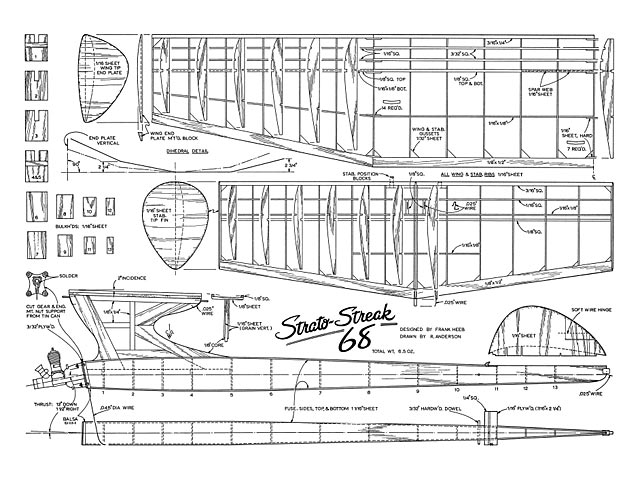 Quote: "Updating a 1941 design results in a Half-A free-flight model with a hunger for altitude. Strato Streak 68, by Frank Heeb.

WHAT was the hottest climbing gas model in the wild competition of the early 1940's? And what is the best performing, most winning 'Old-Time gas model' in this popular modern event a model so hot that some factions of the Old-Time movement want to have it outlawed from their contests? The answer to both is Louis Garami's Strato Streak (oz67), an Atom-powered bomb that was published in the December, 1941 Air Trails.

I got involved in the Old-Time competition about two years ago, and it didn't take much magazine research before I came across the Strato-Streak. There are few pre-1942 gas model designs that can be flown successfully with modern glow-plug engines, but the S-S has the following favorable design features: Large stab at 40% of the wing area; polyhedral wing; fairly thin, flat-bottom, wing section; wing pylon; generous fin area; clean fuselage, minimum cross section; short nose; sensible structure, easy to build and repair.

I built the 1941 S-S, modified for a TD 049; this was the first S-S I had ever seen. In the beginning, I had trouble adjusting the model because I thought I was smarter than Mr Garami and didn't start out with the right side-thrust he recommended. I wound up with 17 degrees down-thrust and 4 degrees right side-thrust, prop reversed, right stab-tilt, and slight right rudder tab. The model finally climbed and glided right! All of these adjustments force the model into the 'grooviest' right spiral climb I have ever achieved with any gas job - this is with a wide right-glide circle. The altitude gained on a 20 sec ROG flight is simply ridiculous, for the model is almost out of sight straight up. I placed second at the 1966 Chicago Nationals Old-Time pylon event right between two other Strato-Streaks.

After some thought on the subject of why the 26 year old S-S design is outstanding and still competitive (one almost won 3/2A at Chicago) in modern AMA events, I became convinced that an updated, slightly enlarged S-S would be just the thing for the short engine run and lower max contests that are popular in the Midwest. Strato_Streak 68 is the result.

I wanted the model capable of utilizing full TD 049 thrust with hot fuel, so the wing area was increased from 220 to 275 sq in. The fuselage was slimmed down, but the moments, pylon height, stab area, fin area, etc., are all proportional to the original. Multi-spar construction was used for a high strength-to-weight ratio and rigidity. The wing loading came out at 3 oz per 100 sq in. The 1941 original had 5.5 oz per 100 sq in. The new model gross weight is 6.5 oz; the original heavyweight ignition job weighed 12-plus oz. So the decreased wing loading and increased power are the major contributors to increased performance.

It is not clear why Mr Garami used five vertical fins in this design. All of this fin area, in conjunction with sufficient right-thrust to start the model out to the right, does seem to make the S-S 'groove' in a very rigid right spiral climb pattern. The only drawback to this..." 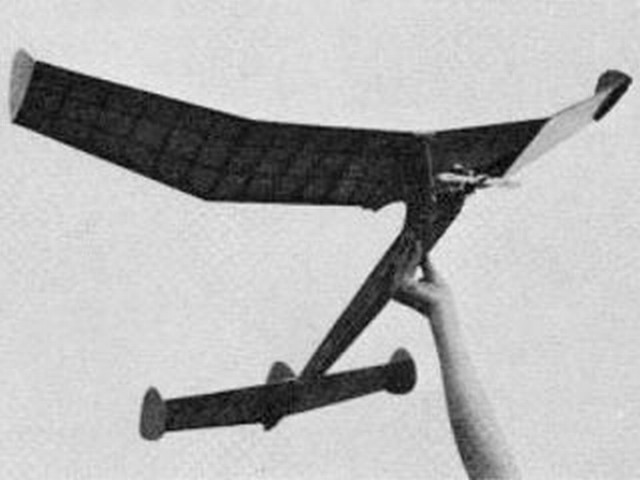