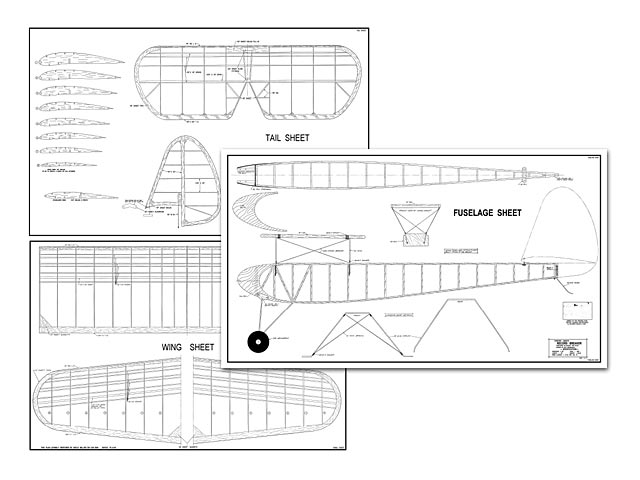 Quote: "Here's a Gas Model That Made a World's Record for Duration and Weight Lifting - How You Can Build It.

TO PRODUCE a consistent championship gas model, a ship must possess these two main flight characteristics:

1. Ability to Soar: Any ship will climb with a powerful riser slamming it skyward, but to have a model take advantage of the slightest trace of a thermal and produce a long soaring glide is to have soaring ability.

2. Climbing Ability Under Power: Utilize every erg of energy in the motor to make the most of the limited run. Every foot of altitude gained in the climb is minutes added to the total length of the flight. Get the model high enough where the more active air currents will affect the ship.

This model has proven to have both of these characteristics to an amazing extent, plus an extreme in stability. In fact it is so stable that it can be made to circle right or left under power or in the glide without having to warp or twist the wings. As a weight-lifting or a radio-control job it cannot be beaten. This model won the Scripps-Howard contest for lifting the greatest weight and then remained in the air for the greatest length of time..."

Update 26/04/2021: Added review (of the Ben Buckle kit) from Aviation Modeller International, September 1999, thanks to RFJ.

A touch of history won't go amiss before we start, methinks. Lots of years ago, I built meself Record Breaker (designed by Chester Lanzo, who hit the headlines with it in 1938) and flew it for ages, learned a lot from it and for some unknown reason sold it. Having always regretted parting with it, the chance to do another one for review was grabbed with both hands.

My original model was built exactly as per plan and flew superbly, but in my quest for lightness was tissue covered. I only had to look at it and it was full of thumb-holes. This replacement is slightly modified in places, to make use of what was learned from the first one. These changes comprise the undercarriage retained by saddle clamps instead of being bound to the formers (this makes covering easier), and the tailplane and fin/rudder are held in place with two plastic bolts instead of rubber bands and a bike spoke. Finally, the cabane wing mount was tidied up to smooth the air flow under the wing at this point. Oh yes, forget the tissue covering!

Fuselage: These big vintage models are easy to build, so long as you take care to get the joints square, and glued correctly. Cut each piece a tad over length, and sand it down square to fit. Use a good PVA or aliphatic resin, rub a little glue into the end grain and let it soak in for a few seconds. Apply more glue and assemble the joint. Clean off the glue that squidges out of the joint before moving on.

Having got two fuselage sides built, sand the lumps off the outsides and join together with the ply formers and engine bearers. These all fitted rather nicely for me: join over the plan if you are a cheapskate, or in your fuselage jig if you're not (well, you should have one, they are cheap enough!). Bend the front and rear cabane wires and fit them in place on the fuselage BUT DO NOT GLUE YET. Be sure the tallest wire is at the front of the fuz, turn the whole shebang upside down and use saddle clamps to hold the wire in position on a piece of heavy ply on the dining room table, while you bind and solder the cross brace wires. It all feels a bit wobbly to start with, but the finished job is nice and firm. Remove from the jig, and put to one side for later. Fit an extra piece of ply under the fuselage if you are going to use saddle clamps for the wheely bits.

Tank and throttle wire goes in next. Talking of throttles, which are attached to engines, I used a Fox Eagle 61 because I'd got one looking for a good home, but any .60- .70cu.in. 2- or 4-stroke will take her up at a remarkable rate of knots. Put the blocks and ply doublers in at the oily end, sand it all to shape and that's the fuselage done.

Wings: There's all sorts of hints and tips on the plan, so the job is not complicated, just big. Build the two centre panels and assemble the six tubes and three heavy wires into the panels flat on your bench. Epoxy in position and let cure hard - one hour epoxy is recommended here. A block on the end of each tube will stop the wires going too far in, and keep them central. Tip: a small hardwood block front and rear in each panel with a roundhead wood screw in each (after covering) will let you elastic-band the panels together under the wing..." 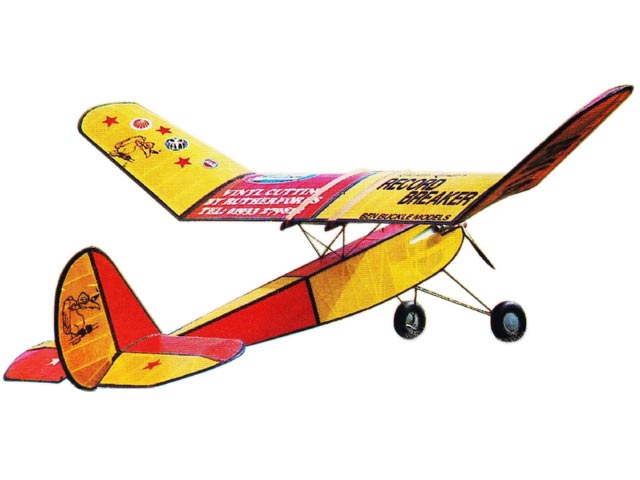