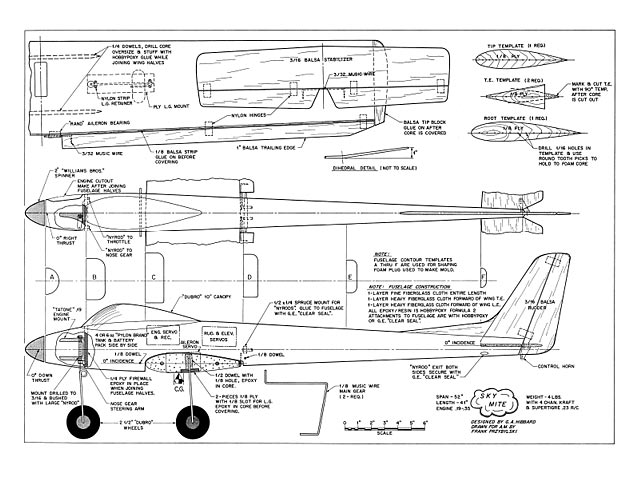 Quote: "Something New in R/C. Using all the latest modeling techniques with foam wings, fiberglass fuselage, and balsa tail, this is a 23-powered small-size competition machine. Sky Mite, by Jerry Hibbard.

WE are rapidly entering a new era in the R/C aircraft field. The key word is 'miniaturization.' Many R/C'ers are experimenting, with small full-house designs and, eventually, I believe small contest and sport airplanes will be the rule rather than the exception - perhaps sooner than later.

This is made possible by the new miniaturized radio equipment. Particularly in the last year, we have seen almost all manufacturers miniaturize their systems to a size and weight compatible with small full-house designs. There is no longer a need to build our 45 and 61 powered aircraft.

The advantages of smaller designs are varied, but convenience and economy are most apparent. Convenience depends on the degree of miniaturization. As for economy, smaller airplanes are generally, less expensive, both to build and maintain. The Sky Mite is the third in a series of smaller designs built and flown in the last year. All three were about the same size with wing spans from 48 to 52 in. All were powered by 23 engines.

The first airplane was a shoulder-wing design with shorter moments than the Mite. It performed well but was difficult to fly smoothly. Inverted characteristics were fair and the airplane did snapping maneu-vers well.

I tried a low-wing design on the second airplane, using the same constant chord wing, and basically the same moments. The inverted characteristics were better, but smoothness through maneuvers was still difficult, and low speed characteristics left much to be desired. The Sky Mite is much like the second de-sign but with two exceptions. The tail-moment was increased and the wing was tapered with a thicker percentage airfoil at the tips than at the center section. The wing has a center-section airfoil of 18% thickness which increases to 21% at the tips. The thickness of the wing remains constant from root to tip.

The longer moments make the Mite a great deal smoother than the previous designs and also allow the balance point to be moved back. The progressive airfoil, coupled with the longer moments, gives the airplane excellent low-speed characteris-tics. I did have some concern about snap-ping maneuvers when the tail moment was increased but since the balance point was moved back the airplane does them with ease. In fact, the airplane easily does all AMA and FIA maneuvers and does them well.

After flying the Mite for the last couple of months, I am convinced that airplanes of this size can perform as well as the larger designs. Maneuvers can be flown much tighter and in better view of the judges. The over-all advantages in convenience and economy will cause many modelers to turn to airplanes of this size and smaller.

Wing: A foam wing was used. Each panel should be cut from a 25 in block of foam. Center-section braces are 1/4 in dowel as shown on plans. Landing gear mounts are made from laminated 1/8 in plywood and glued in with Hobbypoxy Formula II. The cores were covered with Chromecoat. This is a light cardboard material that is very easy to work with..."

Hi Steve - Here is Jerry Hibbard's Sky Mite from American Aircraft Modeler magazine issue 12-68. This model was featured on the cover of this issue as shown. 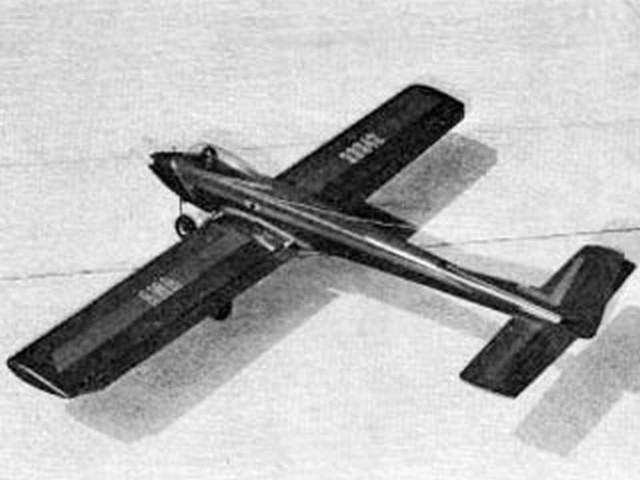