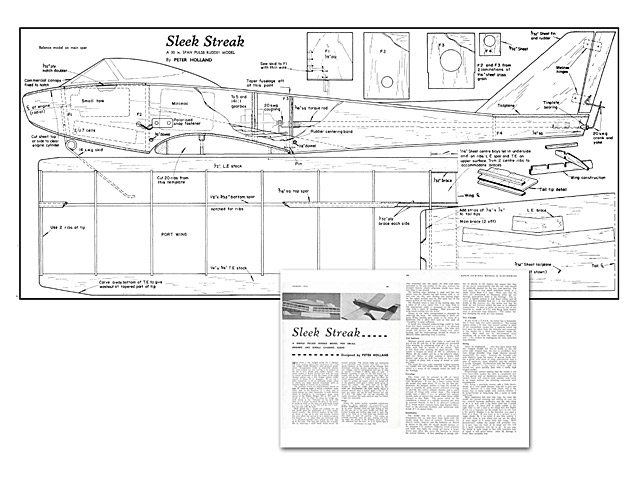 How about a low winged model for a change? With modern lightweight equipment the small low winged model becomes a more practical proposition. Escapements, whilst an admirable solution for many models are now starting to be eclipsed by the use of ultra simple pulse rudder control. The recent contest at Rouen showed how well this form of control performed, in fact the winner of the single channel contest was a low winged, pulsed rudder aircraft of about 36 in wingspan. If you use a pulse transmitter or fit an extremely simple puller to almost any single channel transmitter quite an accurate degree of control can be available.

The standard circuit for multivibrators shown on page 387 could be made to switch a transistor transmitter such as the Easytran, or a relay used to switch almost any other. transmitter. A small receiver which is insensitive to interference when using motors of the Mighty Midget, T03 or TO5 types is simple to wire up either by using the bridge network shown in our 'Pulcycle' in the June 1964 issue or a TASA to boost the drive to the motor. A model as small as this does not need much torque to move the rudder so the T05 and the 141:1 gearbox can cope with the load.

Sleek Streak has a simple box fuselage but the side profile gives the appearance of a more sophisticated aircraft. The forward position of the cockpit serves to tidy up to nose and provide forward side area which has proved to be a useful aerodynamic feature. 1/16 in sheet sides are reinforced with 1/32 in plywood doublers from behind the TE right up to the nose. The tank and battery bay is accessible by removing a small hatch which carries the cockpit canopy.

The battery leads are terminated in a polarised snap fastener and plug on to a similar fastener on the outside of the fuselage. This eliminates switches, permits monitoring of the bat-tery voltage, receiver consumption, and may be used to connect a charger if DEAC cells are used. A flexible mounting is used for the T05 motor and a torque rod to the rudder ensures that slight fore and aft movement of the motor does not affect the rudder neutral position. A thin piano wire coupling is used to connect the torque rod to the slotted end of the gearbox shaft and a rubber band serves to centre the rudder. The band need not be tight enough to bring the rudder central when the batteries are disconnected, the band merely biases it towards neutral when a pulsed signal is fed in. Almost any pulse rate can be used between two and 10 CPS, the higher the rate the smoother the rudder movement but some receivers may not follow a high rate accurately.

Wings. Whilst the author prefers expanded polystyrene wings for speed, simplicity of construction and general toughness; orthodox construction is shown on the plan. Parallel chord has been chosen so that all ribs are cut to the same profile and thick pre-formed leading and trailing edge stock is used. The spar is cut from 3/32 in hard sheet and notched half way down at each rib position. This makes an accurate assembly when the spar, leading and trailing edges are pinned to the building board and the ribs cemented into the slots..." 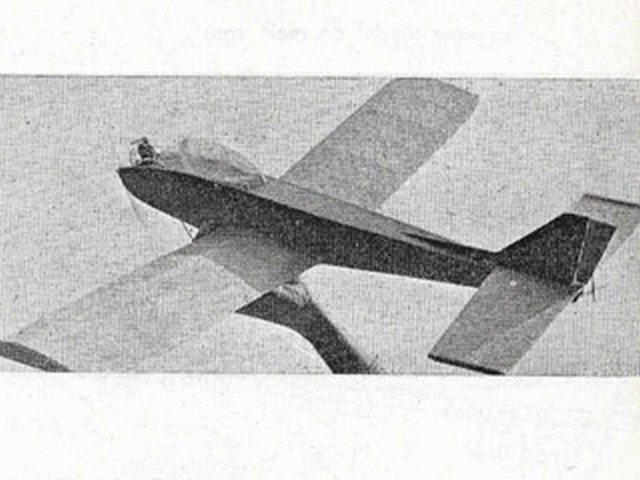