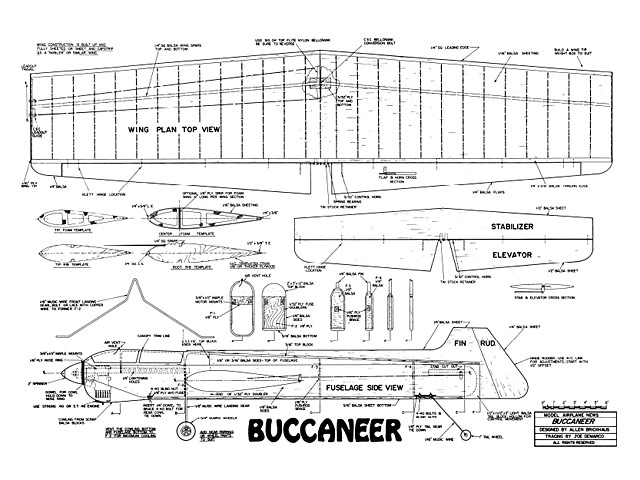 Quote: "My advancement in control-line precision aerobatics has been slow but steady. I have progressed through many contests these past few years and I've seen my pattern point average grow consistently, the result of very hard work at the perfection of the pattern and the use of a dependable airplane. Many of the fliers I've met at contests have become friends and, with few exceptions, every question that I've posed has been answered. Opinions have been given when they were really needed.

My first two serious planes, the Flying Red Horse (oz6997) and the SK-4, served their purpose to the fullest. I then began a series of full-fuselaged stunters. The first Buccaneer was a rebuild of a prior crash. I was able to place several times with it, and at one contest I won a .35 size foam wing. This evolved into a new Buccaneer with a design concept more pleasing to me. The shape and paint scheme of the second .35 size Buccaneer served as the basis for my new .46 version, which I am now flying and which is depicted here in this article.

The size of this present Buccaneer was first dictated by the dimensions of the smallest trunk of my two cars. The total wing area is 640 square inches, packed into a 55in span platform. The aspect ratio for the wing is a bit low at 4.72, but I chose this for stability during the round maneuvers of the pattern. Although some designers are using longer wings with aspect ratios of 6 or 7, one must be careful not to lose strength by stretching a given wing area to that long of a span. My choice of a 4.72 aspect ratio offers a 'within the limits' wing platform that per-forms well. It also gives me enough wing area to carry the weight and drag of the .018in steel cables necessary to fly a .46- engined plane - and the plane fits inside my trunk.

The wing panels and flaps are of an equal span. This is my second venture with equal span wings and I find few vices with them except for the extra wing-tip weight you must carry..." 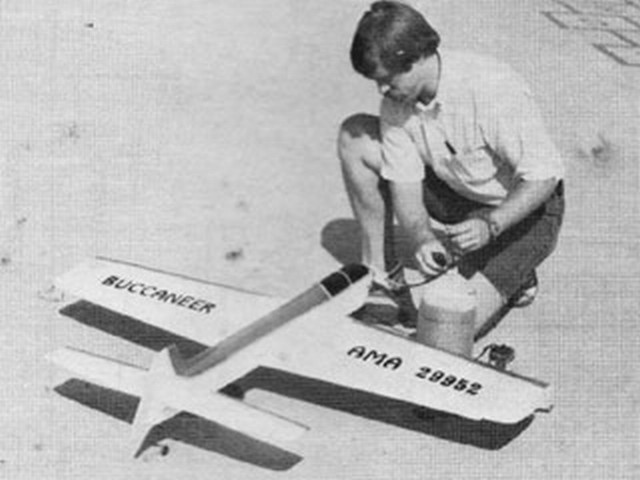