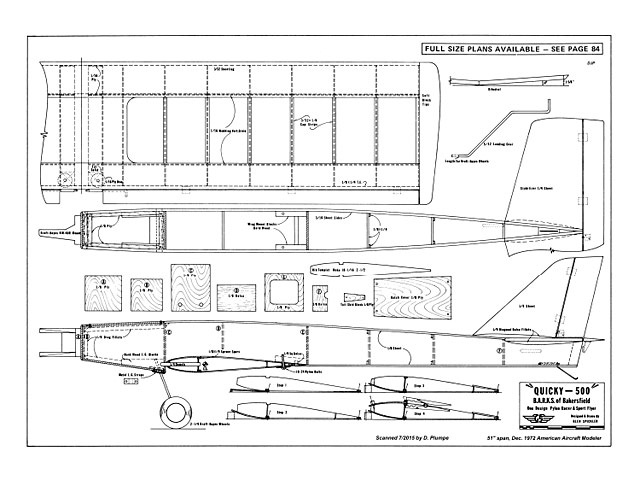 Note on spelling: This design was first published in AAM as the "Quicky 500", but then later kitted by Glen Spickler Radio Models as the "Quickie 500".

Quote: "Club pylon racer: one-design pylon racer for beginners at racing or to test only the flying skills of the experts. A fine sport flyer too, builds quick, flies like a dream. Quicky 500 by Glen Spickler.

The story behind the Quicky 500 goes back to about a year ago when several members of the BARKS (Bakersfield Aircraft Radio Kontrol Society) approached me to see if I was interested in drawing up a one design club racer. Some of the members were holding impromptu races with their stunt type models. Due to the large variation in speed because of differences in design, they were not proving too much in the way of individual flier's ability. What the fellows wanted was a simple 40 size airplane that would be economical to build and easy to fly.

The idea sounded interesting, so out came the drawing board, paper, pencils and a large size eraser. Thus, the Quicky 500 began to evolve. A model for just one purpose has a limited appeal, so it seemed only sensible that the Quicky 500 should also be capable of the everyday fun flying that the majority of radio control modelers enjoy. The success of this approach has been proven by the number of Quickys built by non-racing modelers who fly the ship in all types of club contests.

As a club racer, the little airplane has demonstrated it is just what the fellows wanted. It points well on the straight-away and has no tendency to snap roll in the corners.

Originally, any type 40 engine was allowed and racers being racers, rear intake engines, some modified by experts, were used. This lack of limitation on engines offset the advantage of a one design class so rules were changed, then changed again. Now our club rules require stock series 71 K&B front intake RC engines and 10% fuel is furnished at the races. With this setup, the models will fly around 100 mph on the straightaway and a good flier can turn the standard AMA Formula One course in close to two minutes. Clarence Neufeld installed one of his old Formula One engines with hot fuel in a Quicky 500 and turned a 1:43. Not bad for a little square airplane. This was about as fast as he was turning with his Minnows at that time.

The Quicky 500 has also proven its worth as a trainer for future Formula One pilots. Several of our local fliers have gone onto Formula One racing and what they learned by flying around pylons in club races has been a real asset. You can make a lot of mistakes and recover with a Quicky, avoiding what would be instant trash with a heavier and faster Formula One racer.

Don't let the fact that the Quicky 500 was designed for racing dissuade you from building one. It's a rugged, easy to fly model that can do most of the stunt patterns and with an ability to slow down for landings which will surprise you. No matter how slow you fly, the ailerons will show no tendency to reverse or quit working.

I can't say for sure how many Quicky 500's have been built. I quit counting after forty. You can be sure that the Quicky is a well-proven design, capable of giving many hours of pleasure whether it be club racing or just barnstorming around. I don't consider the Quicky 500 a trainer, but anyone who has advanced to the aileron stage shouldn't have any problems with it. Give it a try, it's a fun airplane!

Construction: The construction is simple, but still requires some explanation. I prefer to start with the wing. Cut 18 ribs from 1/16 and 2 from 1/2. This is best done by stacking..."

Quote: "Steve - At the request of an RCGroups member, I just scanned the Quicky 500 plan & article by Glen Spickler in Dec 1972, American Aircraft Modeler. It didn't fit any forum I'm subscribed to, so I'm sending to you directly. Keep up the good work!"

The Quickie 500 is a club type sport racer manufactured by Glen Spickler Radiomodels, 4208 Santa Cruz Street, Bakersfield, California 93307. With a wingspan of 50 in and a constant chord of 10 in, the total wing area is 500 square inches. It is designed for .19 to .55 cubic inch displacement engines with a .40 being recommended for club racing events.

The kit is of conventional balsa and plywood construction with landing gear, wing hold-down screws and washers, hinges and control horns included in the hardware package. All parts are machined and fit perfectly. This is an extremely easy to construct aircraft and every piece of balsa in the kit is used with no scrap left over.

All-up weight of the aircraft is 3-1/2 pounds with RCM's prototype being covered with silk and butyrate dope. A K & B front rotor .40 and Orbit radio was used in our prototype.

The Quickie 500 is designed for pylon racing for the novice or for fun events and club racing. It is an extremely easy aircraft to fly and land and the landing gear design and location makes extremely easy tail dragger take-offs. The kit is extremely well thought out and all kit parts fit perfectly. Material selection included in the kit was excellent.

The only recommendation we would make is that the plans should show the location of radio and servos for the benefit of the novice flier. An outstanding kit priced at $39.50." 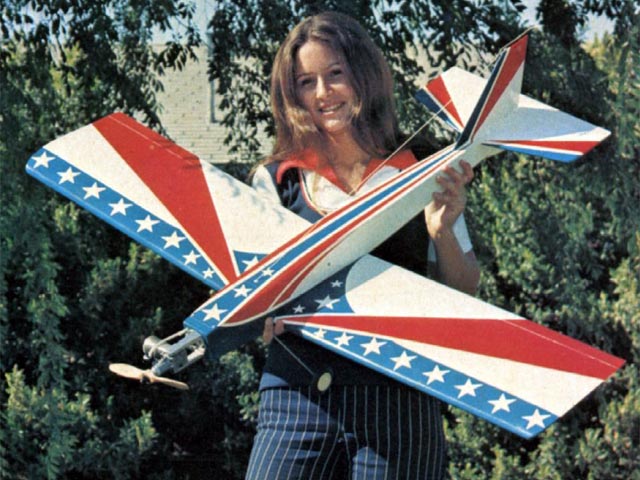