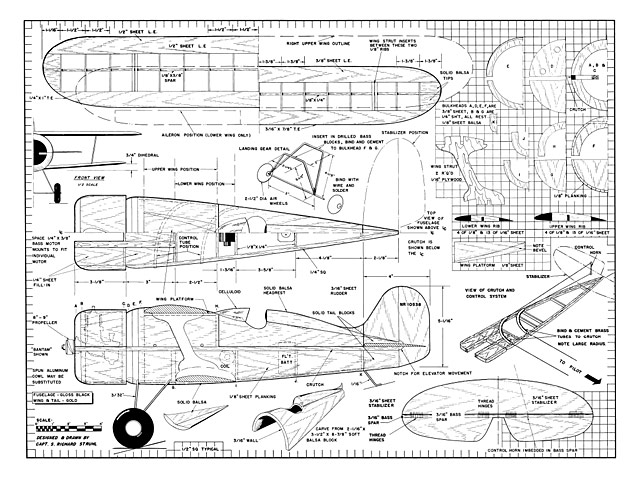 Quote: "A fine replica of an old timer, one of the most advanced designs of its day. Laird Solution, by Dick Struhl.

INDEED it must have been a great moment way back in 1930 when 'Speed' Holman won the Thompson Trophy Race with the terrific average speed of 201.96 mph. There is no doubt, however, that Holman was flying one of the best designed racers of the times.

The Laird 'Solution' was one of the first small span racers and was destined to start the design trend that ultimately ended with the extremely dangerous Gee-Bee. The Laird never did show the treacherous instability of the later hybrid designs.

But to avoid arguments on the relative merits of the original Thompson Trophy Racers, let us instead dwell on the Laird as the subject of a control-line gas model. The design has everything to offer the model builder except the extremely high speeds. Yes, and if you have a strong whipping arm perhaps you can bring its speed beyond the 100 mph bracket! The design has the word 'strength' all over it. Need we say much about the stunting ability of a biplane such as this? And the top wing mounted flush with the fuselage has its advantages too; on one flight the engine rut out while the model was upside-down, and having only about 20 feet of altitude there was no choice but to bring her in in that position. The only damage suffered by the model was a scratched wing and the tip of the rudder worn off. Damage to the author's nervous system was much more extensive.

Construction was kept as simple as possible, as is evidenced in the drawings. With a little care and patience you can have a model that will give you endless hours of flying fun. The original model had a Bantam for power, but the model can take engines up to .35 displacement with no structural alterations.

The fuselage is built around a crutch foundation. The upper and lower sections of the fuselage may be carved from solid balsa blocks, hollowed to 3/16 in thickness and attached to the crutch. I f you don't want to go to the expense and trouble of securing blocks of the right size you may build the planked method shown in the plans.

First cut all the fuselage bulkheads to shape from the indicated size sheet. Note that the plans are one-third actual size, so the plans must be enlarged three times. Build the crutch from 1/4 in sq balsa..."