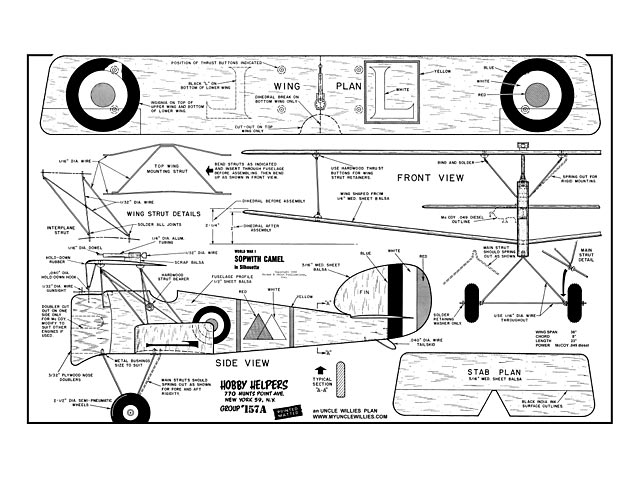 This semi-scale World War I bipe was designed to be a successful free flight model that will look very realistic in the air, yet be of simple enough construction that the less-experienced modelers can build and fly it. It is of balsa sheet construction throughout so there is no finicky covering to be done. If the wood is chosen carefully, the weight will not be excessive either. The model shown weighs about 18 oz ready to fly, with the McCoy .049 diesel fitted.

The fuselage is of soft 1/2 in thick sheet 4 in wide. It will be necessary to cement a scrap of this same sheet to the under-side at the nose, to get the proper out-line. The dotted line indicates where this goes. With the fuselage cut to the correct profile, make the cutout required to clear the crankcase of the side-mounted engine. Then cement the solid ply doubler on one side and the slotted one on the other. Motor bolts go through from one side to the other; don't use wood screws to attach the motor as the thin ply is not sturdy enough to hold them firmly. Cut a flat portion on the top rear surface of the fuselage where the stabilizer is to rest. This 'flat' is actually parallel with the original edges of the sheet from which the fuselage is cut. The rear 6 in of the fuselage is thin-ned down on each side so that it tapers to about 3/16 thick where the rudder joins on. Tail skid is cemented in place before the rudder.

Though the plans show a stabilizer with a flat underside and airfoil top, the model doesn't require this. The forward 2-1/2 in is left flat both top and bottom, then a slight taper toward the trailing edge is sanded in both surfaces with all edges being smoothly rounded. The stab is attached after the tail skid, with the rudder going on last.

The fuselage must be cut away on the underside so that the lower wing may fit in snugly, so it is wise to make this wing next. While both wings have a 5 in chord, those on the model shown were made from 4 in stock, with a 1 in strip cemented along the trailing edge. This 4 in stock is carried by many hobby shops, but wider sheet is often difficult to obtain. Both wings are flat on the under-side, but the top must be cut to airfoil shape. All edges and tips should be smoothly rounded off, of course. The lower wing is made in a single piece, and after it has been sanded to shape, it may be cut in half, the edges beveled so they will fit snugly together when the correct dihedral is attained, and cemented. To get a good strong joint here, coat each panel end with cement and let it dry, then recoat and bring them together. Let this joint dry at least overnight before disturbing it. Then make the cutout for this wing and fasten it to the fuselage, again using the 'double-cement' routine. Block the tips up at the correct dihedral, since the cement will probably soften that you have used to fasten the two panels to-gether. It is wise to smear on a second coat of cement with your finger, after the initial coat has dried, since this joint must be strong. Even a third coat will do no harm here.

Since the metal struts would not hold well in the soft balsa, hardwood inserts termed 'thrust buttons' (they are made for use as propeller bearings in rubber-driven models) are cemented to the wings at all 12 points where the struts fit. These buttons are drilled out so they will hold the 1/16 dia music wire struts snugly. There is not much use in making the top wing easily removable, since the bottom one is attached firmly, so the wing struts can be cemented firmly into the buttons. If you do this, be sure you have everything aligned properly, though. The main advantage in having the top wing 'loose' is that it can be adjusted on the struts to cause the plane to turn, climb, etc.

Rear center wing struts must run through a hardwood plug cemented into the balsa fuselage. Such a plug is not needed for the forward strut ends, since these can be fastened to the ply fuselage nose doublers.

With the lower wing attached, you can cement the flanged metal bushings for the landing gear in place. The gear itself may be bent from a single length of 1/16 wire, starting with the center bend of the main struts (the two rear ones) which are shown in dotted outline just above one wheel in the Front View of the plans. Each leg runs down to axle level, where a loop is made to hold the axle, with the wire then run up to the forward metal bushing. On the original model, the front struts were pushed into holes drilled in the fuselage balsa all the way up to the opening for the engine. They hold very firmly. A straight length of 1/16 music wire serves as an axle, with the wheels held in place by soldered washers..." 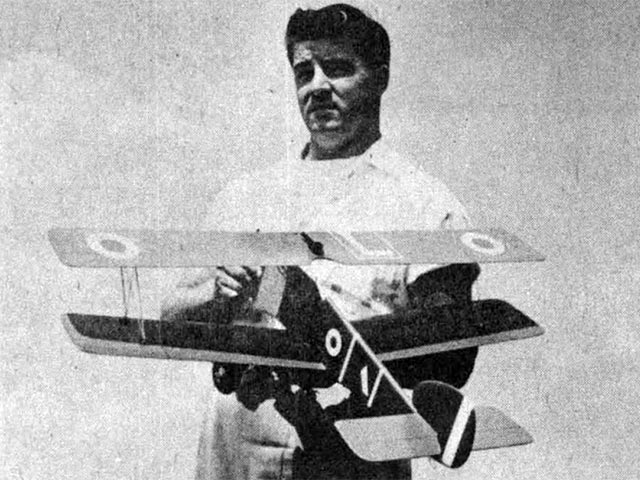