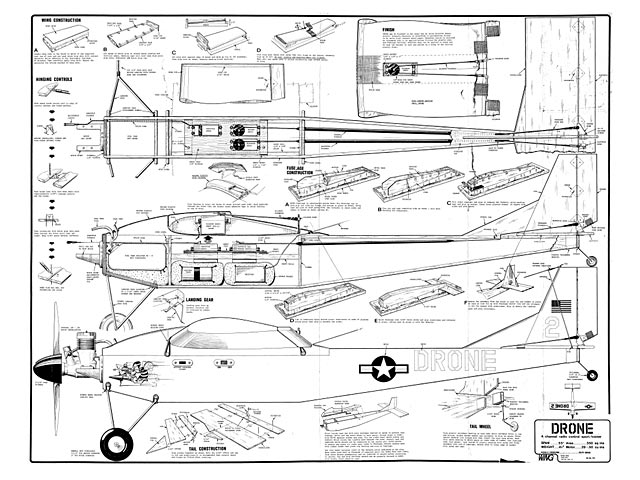 Quote: "Steve, Time to get with the times and post some Drone plans! OK, so this 'drone' is just your average (perhaps below average, looks wise) RC sport plane. But ugly is its charm. These were sold by Wing Manufacturing many years back. The kit had foam wings and a molded wing saddle and servo cover. However, one of the barriers to building one of your very own can be solved by buying wing cores from: http://eurekaaircraft.com/foamwings/wing-d.htm Now, as to the wing saddle part, I can speak with some personal experience that it is not too terribly difficult to replicate one from 1/16" ply and balsa. My friend Walt had a Drone and it got old (like him!) and became brittle (again...) and after gluing it together many times I finally just built him one from wood and glassed it. Or you could just incorporate it into the fuselage structure. The way it's designed, removing the saddle allowed easy access to the tank compartment, which is always a nice feature. Span 55in, 4.25 lbs, for .29-.50 power, 550 sq inches wing area, 4 channels. The kit included some sort of clay finish poster board for wing covering, I would not recommend that as it failed at the margins of the wing center wrap and I had to re-glass it with wider tape. Not a great flyer, but no bad habits that I can recall from the few flights I had on it. Walt had an Enya 40 or 45 on it with the tri-gear setup. Walt was a big fan of the Enya's and so am I. Super simple fuse and tail construction though. Dave"

With a wing span of 55 inches and a total wing area of 550 square inches, our prototype utilizing an OS Max .30 and Hobby Lobby 5 radio, weighed 72 ounces for a wing loading of 19 ounces per square foot.

The 44 x 34 in plan sheet is loaded with perspective and exploded views that make construction quite easy. The unique molded plastic wing saddle and wing fairing makes an extremely simple job of proper wing seating and alignment as well as keeping the interior of the aircraft free of exhaust residue.

Our prototype was covered with blue and white Flite Cote and trimmed with the decals provided on the large colorful decal sheet in the kit.

The only modifications we would recommend would be the use of triangular stock on each side of the fin at the base as well as 3/16 x 1/2 in cross grain stiffeners on the stab tips. We found that one degree of down thrust was necessary with the OS Max .30.

The Drone is a unique looking aircraft when completed, has exceptional flight performance, while roll response can be increased to any degree desired by adjusting the aileron linkage. Inverted flight is as good as upright and the landing speed is extremely slow to aid beginners through their first flight.

The Drone is an ideal trainer, but also will satisfy the desire of the average sport flier who wants a quickly built and rugged aircraft that will provide many, many hours of excellent flight performance and trouble free flying. The price of $39.95 is extremely reasonable for this high quality kit." 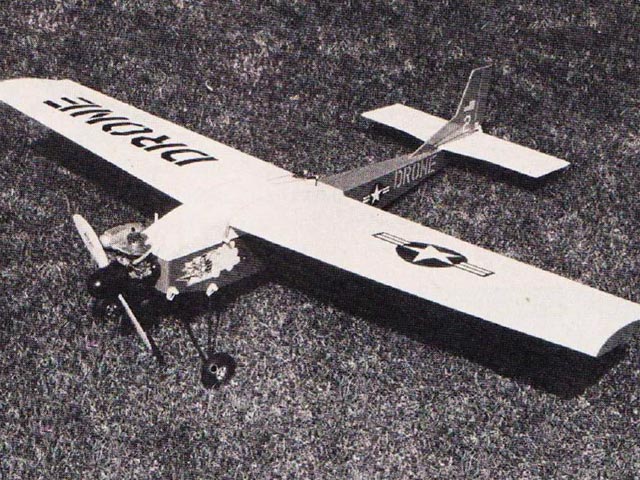