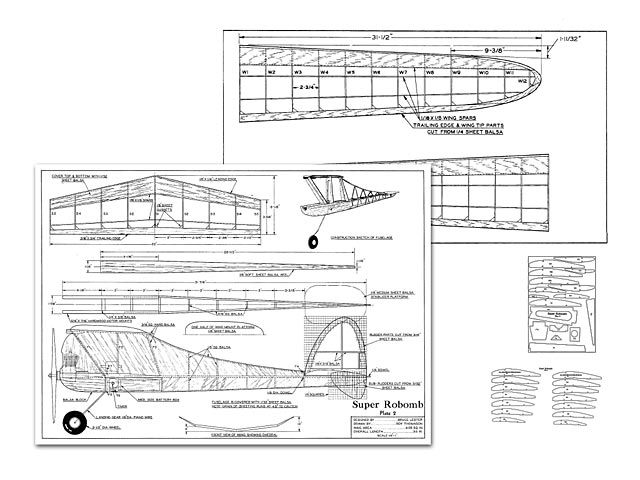 Quote: "This Canadian Class B Free-Flight has been a consistent prize winner north of the border. Super Robomb, by Bruce Lester.

Have you ever wanted to build a ship that would climb like a V-bomb, or take that hot motor of yours wide open? Then build the Super Robomb - a model that is tried and tested, and has proven to be superior in performance to the average types.

The Super Robornb is seventh in my Robomb series of models, designed over a period of the last four years under the same basic set-up aerodynamically, and varying only in class and size. Truly one of the biggest problems to date has been that of retrieving the models after official flights, for they seem to float away on the slightest of thermals, not to mention half-power test runs, and the like.

As for winning contests, we won the Payload Event at the Canadian Eaton's Contest last year with - you guessed it - a slightly modified Robomb, widened to take the bulky payload box!

One very noticeable fact gleaned from the continuous development of this series is the effect of pen-dulum stability in relation to the turn on the model. I have also tried a variety of motor settings, but the best results have come when the motor is set zero side-thrust, and zero up or down. This probably accounts for the fast and high climb, even on a short motor run.

But getting back to the pendulum stability angle, we found the Super Robomb had just the right amount, without affecting the turn, using a Forster 29 for power. If you plan to use a power plant of comsiderably less displacement, you might find it better to lower the pylon height... "

Quote: -"Bruce Lester's SUPER ROBOMB scanned from FM Feb 1949. This is Bruce Lester's SUPER ROBOMB gas free flight article scanned directly from my issue of Flying Models Feb 1949. He was a very prolific contest flyer and designer... In later years his photographs served to document much of the early gas model history as John Pond used Lester's pics from the 1930's in Model Builder... Anyway, this model looks like a great flyer and was designed to go up fast and win... Someday it will be an electric RC project for me... I believe this a newly legal S.A.M. U.S. oldtimer as well. This has been shared with Outerzone. Enjoy,"

Article pages, text and pics, with thanks to tri-pacer. 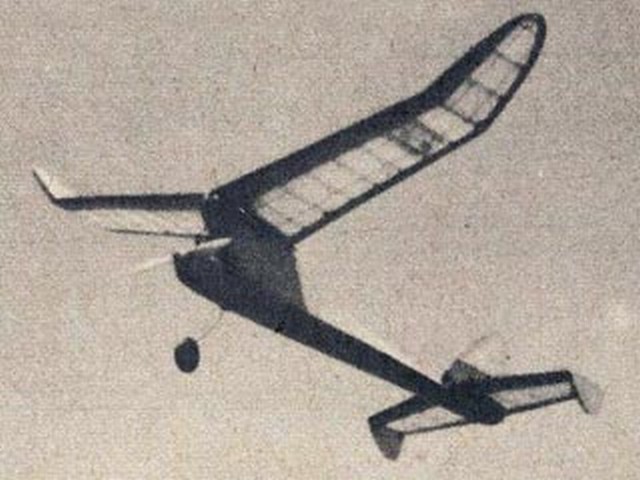