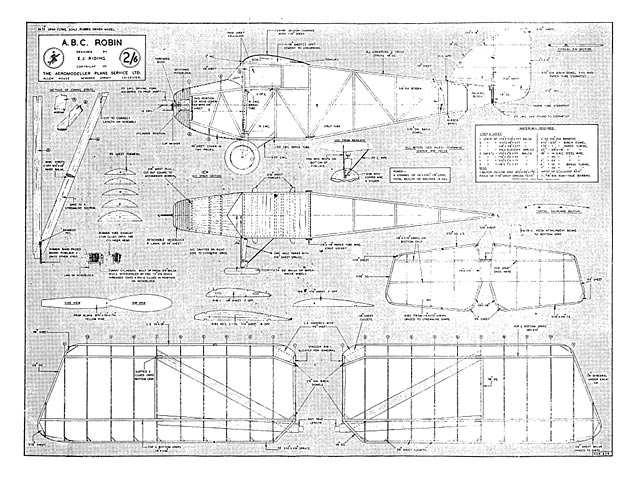 THE firm of ABC Motors Ltd, of Walton-on-Thames, were designers and manufacturers of aero engines both during and after the last war, and in 1929 they produced the Robin, a diminutive wooden single-seater cabin monoplane fitted with a 35 hp ABC Scorpion twin-cylinder horizontally opposed air-cooled engine.

The Robin is C. Rupert Moore's subject for our cover painting this month. It depicts the original machine flying over London, with Hammersmith Bridge and Barnes Reservoir in the distance.

The Model. The model is of very simple construction and embodies nothing that should present any difficulty to the novice. The fuselage is made from 1/8 in sq balsa strip, planked at the nose with 1/16 sheet balsa. The wings incorporate the same number of ribs (1/32 sheet) as the full-sized machine and together with the fuselage and tail surfaces are covered with superfine Jap tissue, given two coats of banana oil and two coats of pigmented dope.

The colour scheme is the same as that used on the fulI-sized machine and is as follows. Fuselage : Black all over with silver nose and engine cowling. The ABC trade mark and registration letters G-AAID are painted orange. Wings and tail surfaces: Orange with black registration letters, the tops of the letters adjacent to the leading edge of the wing.

The dummy ABC Scorpion engine is built up from 5/8 in dia thin card discs interspaced with 7/16 in dia discs cut from 1/16 sheet balsa and topped by imitation valve gear and exhaust stubs.

Flying. The C of G position is shown on the plan and before commencing flying operations this should be checked. The best way to flight test the model is to carry out successive 'assisted' powered take-offs from a smooth surface until it is trimmed to fly straight and level after leaving the ground - this entails the least amount of damage resulting from a badly trimmed first flight. Trimming is carried out.by either altering the incidence angle of the tailplane or by the addition of a small amount of ballast to the nose block. With 450 turns on the motor (six strands of 1/4 in by 1/30 in rubber in a single skein 28 ins in length), the model flew for 25-30 seconds with an 8-1/2 in airscrew. The all-up weight of the model ready for flight is 8 ozs..."

Note this is a low resolution plan. Also, there was a later, better (updated) version of the same plan from Aeromodeller in 1954, see ABC Robin (oz974) 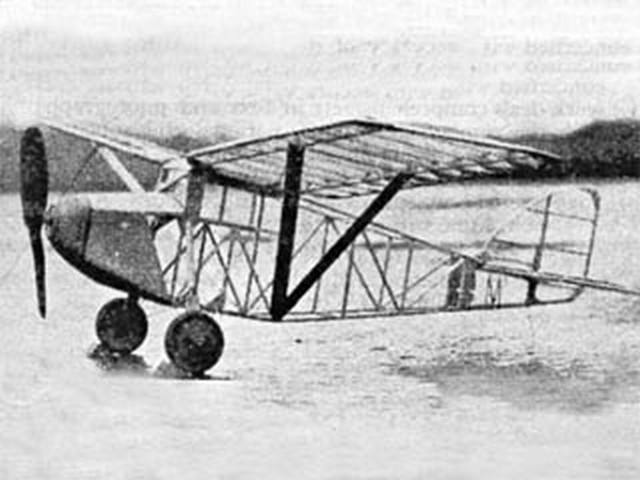 Here are a couple of photos of the rubber powered Eddie Riding ABC Robin from your superb original 1946 plan number oz 6835 [more pics 003-005]. I hope to use the Robin in the Sam 35 Eddie Riding competition at Buckminster later this year.
TrevorT - 12/03/2018
Add a comment