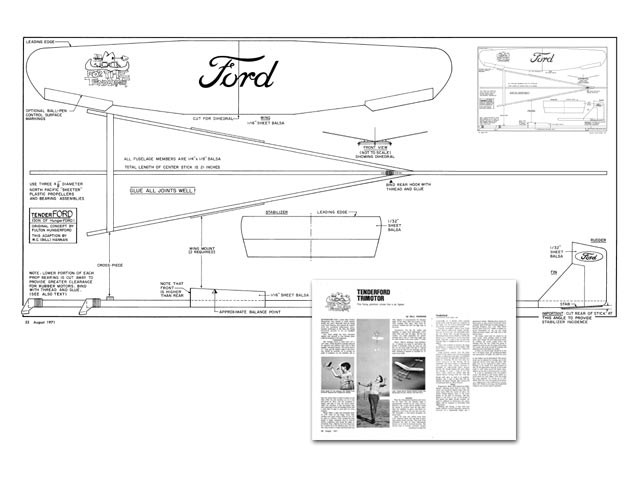 Tenderford. Simple rubber sport model, from the 'For the Tenderfoot' series.

HUNGERFORD HAS a better idea! Fulton Hungerford, who created so much interest during last year's Nationals with his flying scale Ford trimotor, also amazed the experts with his unlimited rubber-power entry. Created on-the-spot at the Nats, the Flying Pitchfork proved to be an excellent performer. The basic design has been reworked slightly and reduced so that full-size plans could be included in this magazine.

Construction. The fuselage frame is made from 1/4 x 1/8 in balsa, which should be carefully selected for lightness and stiffness (take time to find straight, unwarped pieces). The center stick is 21 in long, and the shallow angle at the lower rear should be carefully cut to provide an angle of incidence for the stabilizer. Pin or tape the center stick to hold it in place on the plans while the side members are cut to size and glued on. Next, trim the crosspiece to length, and glue it atop the motor sticks. Allow the assembly to dry thoroughly and, after removing it from the building board, add a small fillet of glue to each joint for extra strength.

Wings: Select a light and unwarped sheet of 1/16 in balsa for the wings. Trace their outlines onto paper which, when cut out, can be used as a pattern. After cutting the wing panels to shape, sandpaper them to remove surface roughness, and round -the edges to streamline them. Slightly bevel the wing roots for a better fit at the dihedral joint. Cut the two wing mounts to shape and bevel their top sides slightly... " 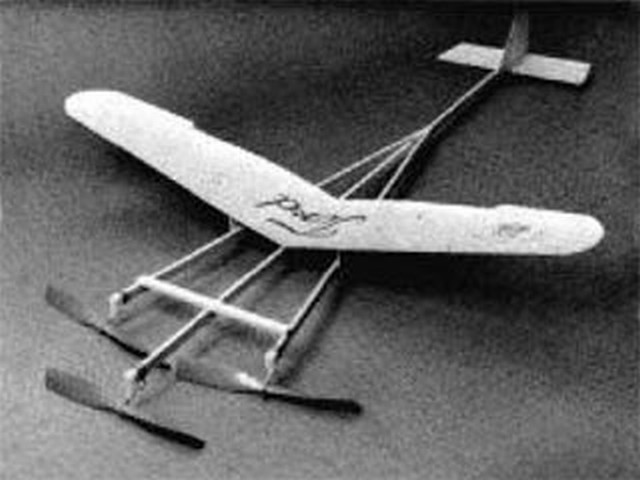