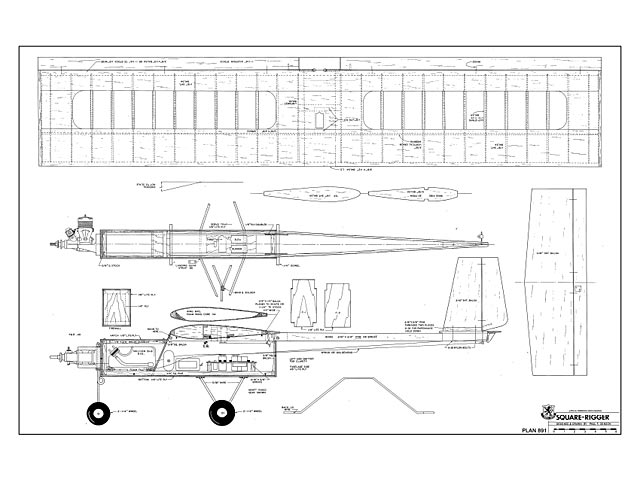 Quote: "A quick, rugged, easy to build aileron trainer for .40 size engines. A real pleasure to fly and is ideal for a club trainer. Square-Rigger by Paul F Denson.

The first Square-Rigger was so called because, except for the wheels, there was not anything that even approached being round on the whole plane. She is the latest development in a chain of similar aircraft.

When he joined the Wingmasters R/C Club, a member brought to the field a little .20 size quick build plane with a simple wing, a plywood box for a fuselage and a twin stick boom on which to hang the tail. It may have been new to the fellows at the field but he has been flying it around the area for years. We can personally attest to the fact that it has more miles on it than a restored Model A.

After watching all the fun he had flying the little tail dragger, other members of the club decided to enlarge the fuselage, fit it with Senior Falcon (oz6137) wings and tail and power it with a .60. Even in the larger size, they fly great. They can do practically any maneuver, are as strong as an ox and last forever. If you bash one, the wing flys off, the tail bolts shear and a new fuselage can be built in one afternoon. They are a real practical airplane.

The prototype of the little .20 powered plane was developed and flown while the designer was stationed with the Navy at Corpus Christi, Texas, in 1969. Even before this, he flew similar rubber powered free flight planes.

From what we can find out, the Grandpappy of this whole chain of planes was pictured in Clarence Haught's column in Model Aviation and modeled by Bob Schafer who found it in an early Frank Zaic Yearbook. The original was a 1937 design by Frank Ehling. High wing, boxy fuselage and twin booms from each side of the fuselage bottom tapering together under the empennage. (See photo.)

Not only was Square-Rigger I englarged in size, but it was modified to fly with trike gear and a .40 in the nose. The boom departs from the top of the fuselage and still functions to hold the tail in place. Moving the boom to the top of the fuselage seemed to make more sense when using a trike landing gear. All of the club planes use the front end of the booms as beam engine mounts but, because of the necessary size up front, this made the tail booms very heavy. Square-Rigger uses a radial engine mount; therefore, the size and weight of the booms may be reduced considerably. By the time the third Square-Rigger evolved, even more lumber was whittled from the booms.

The basic concept for Square-Rigger was to see just how simple a plane could be made. Chuck Cunningham's parameters in RCM were carefully studied. The whole plane was built around the wingspan and chord. A set of Wing Mfg constant chord, semi-symmetrical wings were on hand, they had been ordered some time previously with such an idea in mind. The S-4 wing has a 9-1/4 in chord and a 54-1/4 in span. After adding a trailing edge and 11/4 in ailerons, the resulting wing has a chord of 10-1/4 in.

The wing is sheeted with 1/16 balsa back 4 in from the leading edge and 2 in forward from the trailing edge. The center and tips were sheeted and capstrips were placed in between. After the wing was covered you could not tell whether it was foam or built-up. Ruler in hand and a sharp blade on the table saw, we whacked out all the pieces for the fuselge in less than an hour. There are three 3/8 square sticks of balsa in the fuselage, all the rest is either pine or lite ply. The firewall is, of course, aircraft ply. That evening the fuselage was built and sanded. The next evening it was painted and was flown that weekend. The most time consuming job was the installation of the radio gear and controls..." 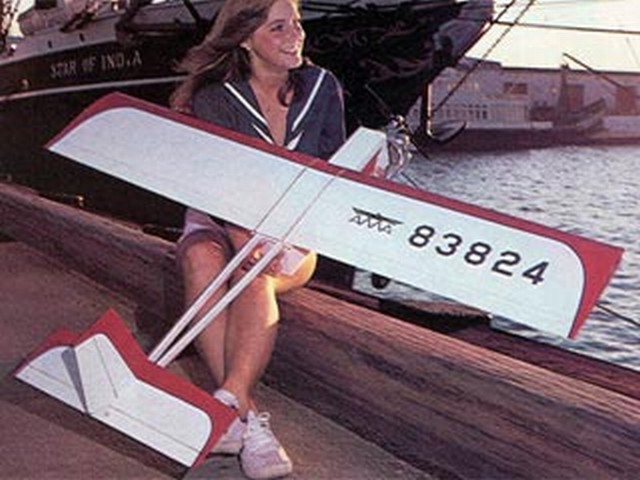 Attached is the article for "Square Rigger" that appeared in RCM, June 1983 [suppl. file]. I noticed it was missing. I built one about a week after I received the June 1983 issue of RCM, and it was one of the easiest airplanes that I have built and flown. I gave it to a club member who has it and still flies it regularly to this day. I am building another currently and it will be electric. Keep up the really great work.
StevenWieczorek - 21/09/2018
Hello Outerzone, Thanks for a great webpage with lots of useful information. Here are a couple of photos [004-006] of a plane I have based on the Square Rigger (oz6817) plan. This aircraft was inspired by the Square Rigger plan. The wing has a 56 inch wing span with a foam core. I called it a Box Flyer 46 because of the plywood box fuselage and the 46 sized engine. Almost ready to fly once I make the ailerons operational. Regards, Mal McKenzie in Sunny Queensland.
Mal McKenzie - 17/08/2020
Add a comment