Quote: "From one of England's top scale designers, Dennis Tapsfield, comes this 613- span, 3-1/2 in scale model of Jim Bede's little jewel. A .90 4-stroke will handle it nicely. Bede BD8, by Dennis Tapsfield.

For me, one of the most difficult decisions to make is on which full size aircraft to base my next model. I probably have the documentation for several aircraft, all of which I consider to have the right attributes for an RiC model. However, the BD8 saga, for me, began when I was in Oshkosh in 1980. If you aren't familiar with Oshkosh, it is an airfield about 100 miles north of Milwaukee, Wisconsin, and, during a week in August each year, it is the venue for the most outstanding full sized aircraft convention in the world. in 1980, 9000 (yes, nine thousand!) aircraft arrived there, mainly privately owned, and falling into several different categories including veteran, vintage, WW II, replica, etc., etc. A lot of these are parked in fields surrounding the airfield if they are not going to be flown during the convention, and the owners either camp under the wings, or even inside the aircraft! To be able to walk around, talk to the owners and look at and touch the planes was really something.

Anyway, during the flying on Thursday afternoon, out of the blue, in came this unusual little plane; pretty, with an outstanding trim design, and it really looked like a model. I took a couple of color slides of it, and was determined to try to acquire a 3-view drawing from somewhere so that I could build a model of it! It was to be several months before the drawings appeared in the April 1981 AerOmodeller, and set me on the road to building it.

After some thought, I decided that a scale of 3-1/2 in to 1 ft would be about right, since I could buy wheels the right size, 4-1/2 in, and the cowl would completely hide the engine and silencer. The right size spinner was available and, most important of all, it would fit in the car! The last remaining thing was that the canopy that Howard Blackwell makes for his Robin adapted almost perfectly, so I was all set.

If you are interested in the prospect of building this rather unique airplane, then read on. Note that the prototype had foam wings, fin, rudder, and stabilizer. You can cut your own cores using the templates that are shown on the drawing, or if you can raise a mortgage for the balsa, you can build them up in the traditional way as shown.

Construction. Built Up Wing: This has been designed as a simple structure and, being of very low aspect ratio, is not highly stressed. Select your wood with care. Cut out all the ribs, and assemble one wing at a time, by pinning the 1/2 x 1/4 in spar on the plan, and setting the ribs on it. Use some packing under the trailing edge to support the ribs, add the leading edge, and the top spars. When this is set, remove it from the plan. Pin down a piece of 3/32 sheet, leaving room for the trailing edge and, using a piece of packing near the main spar, glue the wing to the piece of sheet. Allow this to dry, and continue to build the wings to the drawing, by joining them together before sheeting. Don't forget the aileron snakes..."

Update 07/07/2015: Added supplemental alternate scan, thanks to JPM. This scan is lower res, but is complete, with no missing central band. If anyone out there has the time and skill to merge these 2 scans together, we'll then have a top class high res full plan. 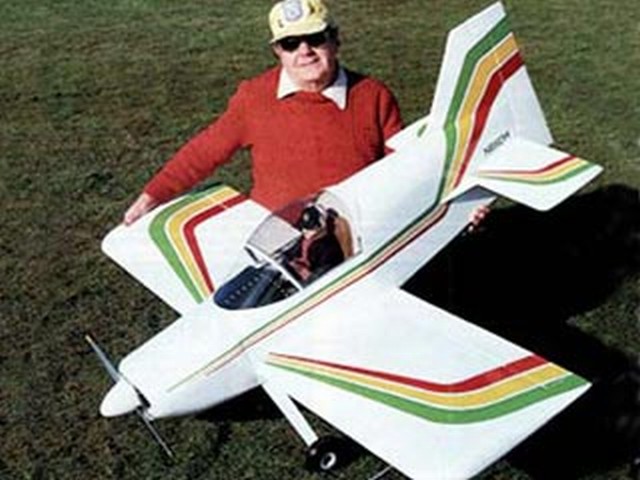