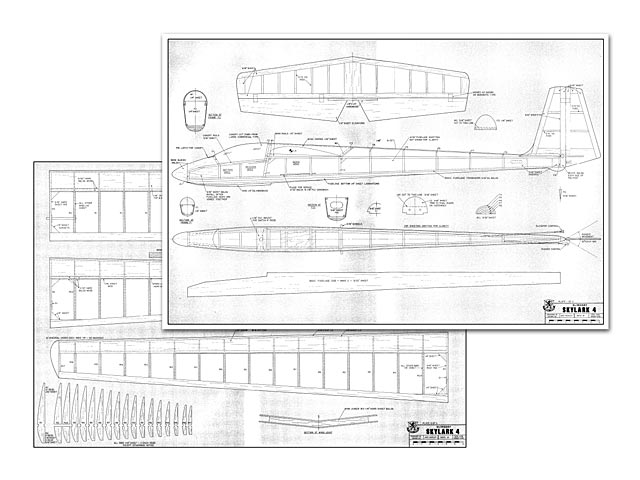 It all started when I won a giant family size bottle of Titebond at the Northrop Flying Wing Contest. At first I just dumped it on the work bench together with my slightly used wing, and got on with the serious business of hanging up the trophy as well as receiving the usual paeans of praise from the family - 'Another dust collector, eh?' and similar tributes to my prowess.

About a week later I finally got around to cleaning up the work bench and I noticed it again, 16 ounces of the finest glue - and it wouldn't keep forever. What a challenge, enough stuff to cement the Queen Mary back together, or at least securely to the dockside! Restraining myself from placing an instant call to the Lord Mayor of Long Beach, I realized that this was a great opportunity to build my fabulous Cirrus-beater, planned for so long. A twelve foot span model, full of intricate ribs and spars, formers and longerons, stringers and spacers - in short, a structure that would make the famous bird cage Maserati look like an orange crate.

So it was quickly to the drawing board and an out-line sketch was speedily prepared. After a few preliminary scribbles it was obvious that all those intricate pieces would use up enough balsa wood to enable at least one balsa distributor to instantly retire to Hawaii and live a life of luxury forever. So out they all went - all those beautiful ribs and spars - and a much simpler structure was devised. It then suddenly dawned on me that all this effort was to use up $2.50 worth of Tite-bond, which graphically illustrates my grasp of the theory of economics, but by this time the project had gathered too much momentum to be stopped.

So, balsa wood was bought, hacked, bent, glued, broken, sanded and doped. The results can be seen from the accompanying photos. Don't be put off by the size, it's an easy model to build, and comes apart into enough pieces so that transportation is no problem. Try one if you're a sailplane fan, it's a lot of fun.

Construction. It's always best to begin with the bits you don't like so that when most of the construction is over you end up making the bits you do like, and this gets all the building done a little quicker. So, now go to whichever bit you always put off until last, which may or may not be:

The Wings. By a careful study of the plans and photos you will have realized that the wings are made in three separate pieces, the center section and the two tip panels, each four feet long. This system was chosen so that the wing dihedral joint could be built solidly into the center section, and also to allow an easy hook-up for spoilers, if required. (More on this later). All three wing pieces are, however, built in a similar manner.

Outer Panels. Pin down onto the plan (which should have been covered with waxed paper), the trailing edge strip and the lower leading edge sheeting. Cement the lower 1/8 x 1/4 spar to this sheeting making sure that all these spars are hard balsa. The lower cap strips, made from 1/4 in wide pieces of 1/16 sheet, are then cemented into place..." 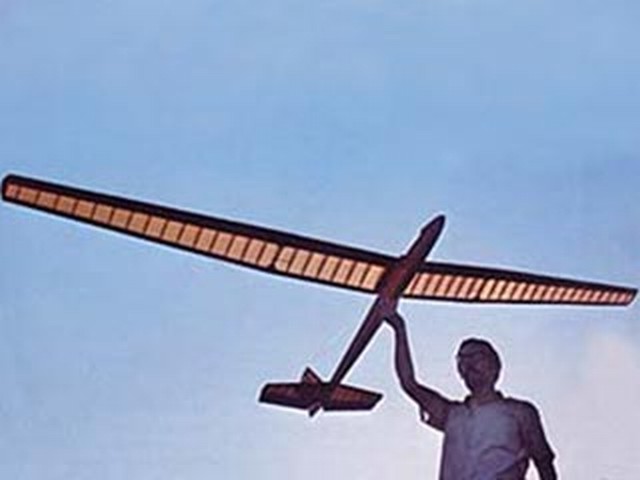