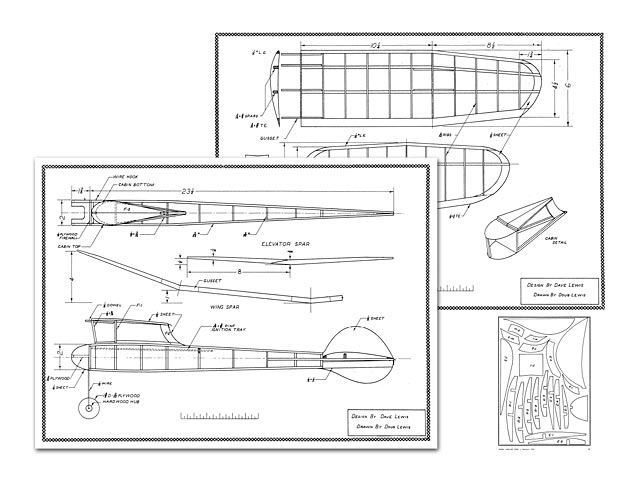 THE Ay-Jay was designed primarily for simplicity and ease of construction, ruggedness, and high performance. It has proved itself to contain all these qualities. The original model was constructed in four evenings, and after an active contest season it is still in excellent flying condition.

So far as ruggedness goes, through its entire career it has required one patch and has broken only one prop to date.

If this isn't enough to convince you that the Ay-Jay should be your next ship, here's its performance record: it has either won or placed in every contest in which it was entered. At one contest it took high time for all three classes. It also took first place in Class A at the 1945 American Society of Model Aero Engineers 'Nationals' held at Bendix, NJ.

Fuselage: The first step is to enlarge the plans. This should prove simple enough using the scale and dimensions provided. To assure uniformity, build one side on top of the other. After the glue has dried separate them by running a razor blade between the glued areas. Next join the sides with the crosspieces as shown. The cabin is very simple and can be assembled directly on the fuselage. The plans for the motor mounts are self-explanatory.

The landing gear is glued in place and is re-enforced with scrap batsa strips. A plywood wheel is recommended since it is very light, strong, and streamlined. Wire hooks are glued securely in the cowl and the front of the fuselage. Rubberbands are used to hold the motor mounts in place. The easiest way to hold the ignition units in place on the track is also with rubberbands. The original model had the timer fastened to the track, operated by a string. The ignition track is bolted to the rear of the firewall.

Wing: The wing is built by first laying down the leading and trailing edges and gluing the ribs to them, When the glue is dry, take it off the plans and glue in the spars and tips. After this much has dried, crack the wing at the dihedral points and glue in the proper dihedral. Reglue all joints and add gussets as indicated..."

Hi Steve- this is the Ay-Jay scanned from my issue of the Feb 1947 model airplane news. from jeff mccammant story city iowa... thanks, 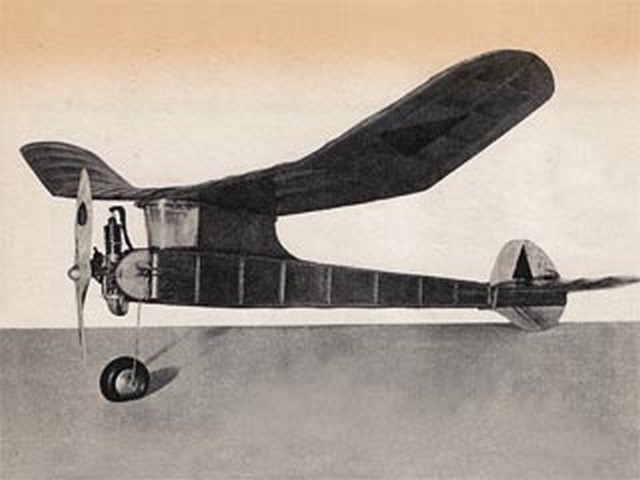