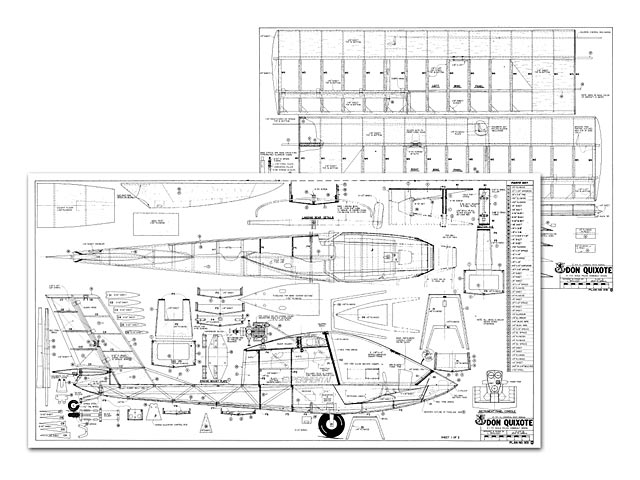 Quote: "This scale model (1:3.5) of the Polish homebullt is not only an appealing full sized aircraft, but extremely docile, with superb flying and ground handling qualities. Don Quixote, by Laddie Mikulasko.

There are countless eye appealing full sized aircraft in the world, which modelers build as scale models. For me, one of my favorites is a small Polish homebuilt called 'Don Quixote.' The plane was designed by J Janowski, who wanted to own a plane which was easy to build, easy to fly, and good looking. I think that he succeeded on all counts.

If there is anyone interested in building the full sized aircraft, the address of the builder or plans distributor can be obtained from the EAA in the States, or the EAAC in Canada.

Eight years ago I built two models of Don Quixote, the same size. I had a lot of fun flying them and entering several Canadian scale contests and flying rallies. Eventually I sold them so that I could concentrate on other modeling projects. As time passed, I could never forget this plane. I knew that sooner or later I would be building another one. Here it is.

I made a new set of drawings and in a short time the model was built. Once again, I'm having fun with it and receiving many nice comments as it is extremely docile with superb flying and ground handling qualities.

The model is exact scale, except for the engine. A 4-stroke, 2-cylinder engine would make it exact. As with any scale model there are some items which you have to make for yourself. None of them are difficult to fabricate. The scale of the model, as shown, is 1:3.5. Dimensions of the full size are:

The model was designed to be easy to build for a relative beginner who has built at least one or two models before. To build the model, simply follow the order in which the instructions are written. Most items are identified by number or fetter so that the description of the parts is made easier. The whole model is made from balsa, with some plywood and spruce.

To start building the model, cut out as many parts as possible. Drill holes where necessary. Start by building the wing center section.

Take plywood piece (1) and, with 5-minute epoxy, glue the 3/16 ID brass tubing on its centerline. Glue in balsa fillers (6) on either side, and then enclose the structure with plywood piece (1) to box in the tubing. Drill 1/8 in holes for the engine mounting anchor plates and cut out the square holes for the 3/16 wheel collars, which will eventually hold the wings in place.

Drill the angled hole for the nyrod for engine throttle control. Now, glue this entire assembly to the bottom plywood sheet (4), together with ribs (1,171) and hardwood block (2).

Epoxy two 8-32 screws into block (2) with their heads flush with the bottom sheeting (4) and tighten with nuts. Glue on the top sheeting (5). Now, put this center section aside.

Build the wings next. They are simple to build and I only have a few comments to make regarding the construction. Before gluing the top Leading edge sheeting down, the piano wire (37) has to be glued in at the proper angle, To do this, first glue plywood web (41) to the top and bottom spar (39) on the side close to the leading edge. Take piano wire (37) and insert it through the first balsa rib (W3). Do the same thing with the rear piano wire (38), but attach this one to the rear spar (40) with thread and epoxy.

Now, take the wing center section and place it on top of the plan in line with the wing roots. Put some weight on top so that it does not move. Take one wing panel and slide it toward the center section, until the wing root is touching it, with the 3/16 piano wire now sitting in the tubing and the 1/8 wire in the hole in plywood rib (W1). Lift the wing tip and place a 1/4 in block under it so that you get the proper dihedral when the wing is finished.

Quote: "All extant plans have some clipped geometry at the top of Sheet 1, from the interpage gap. The loss is disguised by the latter addition of a frame by a previous restorer. This scan, from a dissembled magazine, provides a decent look at all of the geometry. Created from 1st generation magazine scan." 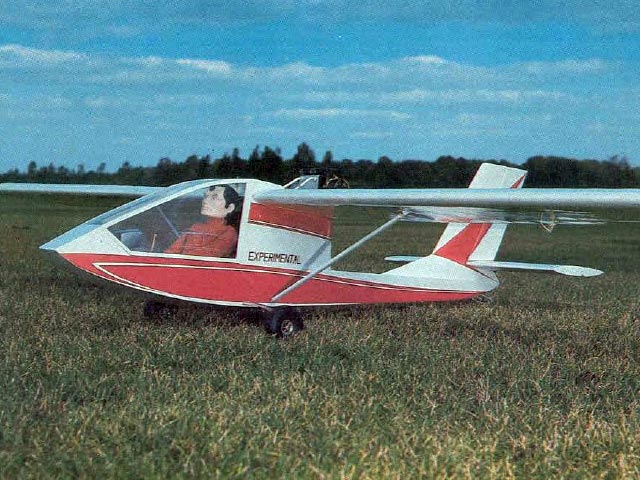 Some pics of the Don Quixote. In the first photo [pic 005], Laddie heads out to the runway at the 1977 Kitchener-Waterloo Flying Dutchmen annual Scale Rally, when this model was brand new! The K-W Flying Dutchmen have hosted this event for over fifty years, and it is one of the largest Scale Rallies in North America.
Second photo [pic 006] - Waiting for clearance as a WW1 Albatros clears the runway. In those days, they had three R/C model size paved runways arranged in a triangle. Very nice! However, the rest of the field was so well manicured, many preferred to takeoff and (especially) land on the grass instead.
Third photo [pic 007]- On final approach after another fine flight. Note the barn silo in the background, which is further away than it looks. This flying site is in Ontario's agricultural heartland.
ChrisMoes - 13/03/2021
Pic 008 is taken from the cover of Modelarz, Jan 1981, see https://www.hippocketaeronautics.com/hpa...
SteveWMD - 12/04/2021
Add a comment