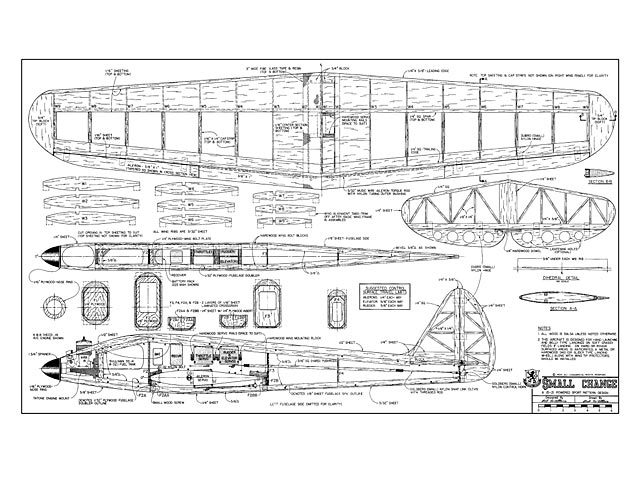 Quote: "If you want pattern-like flying characteristics, small size, inexpensive to build, then grab onto a set of plans for the Small Change. It will go easy on your wallet and make you believe you're flying a .60 powered brute. Small Change by Bob Wallace.

Small Change is a small, inexpensive, easy to build and fly R/C aircraft that possesses pattern-like airborne characteristics. As can be seen in the accompanying photographs and reduced size plan sheet, Small Change looks very much like a typical full size competition pattern ship with its landing gear retracted. However, there are significant differences, $mall Change can be built for about $15 to $20, powered with any .15 to - 19 size R/C engine, and will accept any normal size airborne radio system components. Compare that with the price of the latest pattern kit with retracts, a thirsty 'Brutus-Maximus' .61 ABC Schnuerle ported engine with its accompanying tuned pipe and fuel pumper unit, and the latest in super-duper sophisticated radio systems with all its nifty gadgetry!

This is certainly not intended to imply that $mall Change is the equal of a fully equipped competition pattern ship - obviously it is not! What is suggested is that surprisingly good pattern performance can be realized without the expenditure of a lot of hard-earned dollars!

As the plan sheet indicates, the construction of Small Change is very basic and well-within the capabilities of most R/C modelers. Even ifyou have never attempted to build from plans, Small Change shouldn't pose any problems.

The sport flier who doesn't want to enter competition, yet has a Walter Mitty like yen to make like a Dave Brown or Hanno Prettner will hopefully find $mall Change especially intriguing. Small Change is designed for hand launching and belly
type landing on grassy (or snow covered) fields. Obviously, a more substantial skid or glider type belly landing wheel arrangement should be employed if landing on hard or rough surfaces is anticipated.

Construction. In building from plans, I believe the project is far more enjoyable if all the various parts are cut out before starting the actual assembly process. This creates your own kit, so to speak, and seems to speed up the actual construction of the model. For the wing you will need 18 ribs (2 of each size) and the tip blocks. The plans show alignment tabs on each rib which serve as 'legs,' which insure that the wing panel thickness taper is correct when the wing panels are assembled on a flat surface..."

Article pages, text and pics, thanks to SteveBailey. 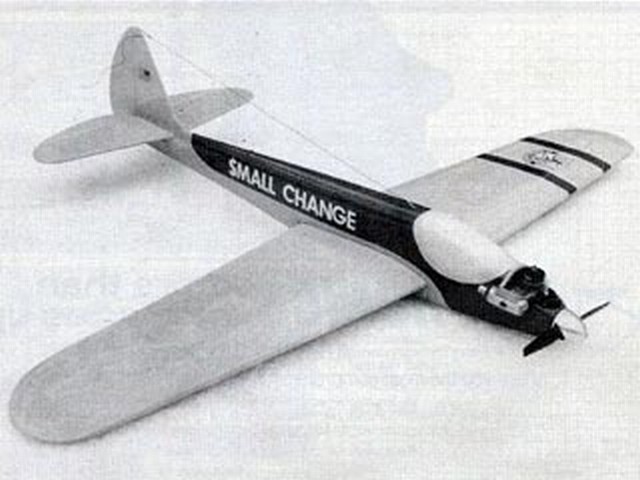