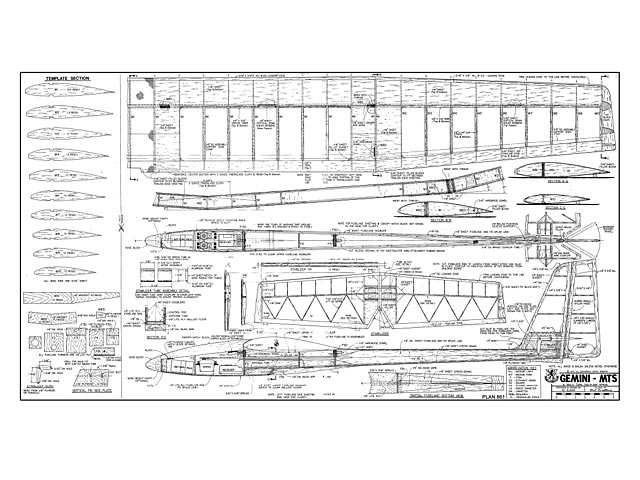 Note the Gemini MTS was also kitted by Pierce Aero.

Quote: "This is the Gemini MTS. MTS stands for Multi Task Sailplane. It is my judgment that in the not too distant future, the currently popular duration-landing contests will give way to the multi task contest. Granted the MTS contest is more difficult to run, but it is a much better test of man and machine and its coming is inevitable.

Okay, so what makes a MTS sailplane different? Since one of the tasks is speed it will have to be able to carry large amounts of ballast and it will need to be strong enough for 12 volt zoom launches. Does this mean a sacrifice of the qualities that make up a good thermal-landing sailplane? I don't think so. To be competitive in MTS events, the sailplane needs to be more efficient than the pure floater. Sinking speed can be equal to the floater but that is unlikely, and even if it turns out to be slightly greater the increase in range (penetration) more than makes up the difference.

The Gemini MTS was designed to depart as little as possible from the characteristics of the Paragon (oz5849) and to have the additional capabilities required for MTS competition. At 43 oz the Gemini MTS has a wing loading of 6.65 oz / sq ft which is about the same as the Paragon. In still air its sinking speed is only slightly greater. The Gemini MTS can be flown quite slowly and I would estimate that it is not more than 2 mph faster than the Paragon. The Gemini MTS is designed to be launched on a 12 volt winch and using a zoom release it launches about 75' higher than the Paragon. Handling is very good, quite similar to the Paragon. Penetration is noticeably better empty and much better when both are ballasted (to the same wing loading, of course). Climb in thermals, a somewhat intangible quality, is excellent.

At the recent LSF contest, Alex Bauer flew my prototype Gemini MTS to second overall, and second in the speed task. He made one speed flight of 10.4 seconds which was the fastest scored during the contest. The model carried 3-1/2 lbs of ballast during the speed runs. Prior to the contest there was still some question in my mind about whether it was strong enough for a 12 volt zoom launch with 3-1/2 lbs of ballast and whether it would go fast enough if it survived the launch, but not now.

The Gemini MTS departs from conventional design in only one area; namely the use of a thick semi-symmetrical (bi-convex) airfoil section. This is not the place for a disertation on the relative merits of various airfoil sections. So we won't go into it. The Gemini M8253515 does the job and as an added free bonus we get a very strong torsion resisting wing. Also, if anyone cares, with this section the Gemini MTS does a very nice vertical '8' (inside loop followed by an outside loop).

The Gemini MTS can and has been built and flown by a number of modelers of just average ability in both areas but full realization of its capabilities will only be achieved by the more advanced builder/flier. Regardless of your building experience I would strongly advise that you take the time to thoroughly study the plans and read the instructions over several times... " 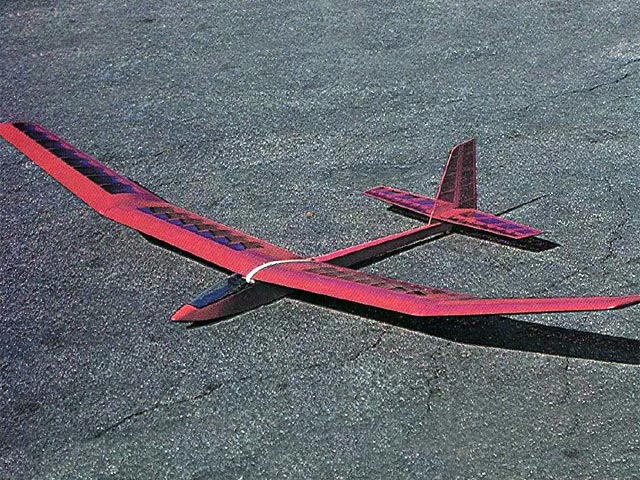 I believe the Gemini in the photo was flown by me to a US Nat Record of 38 +- miles in the mid Eighties. (Standard Class free distance and Distance to a pre determined goal, approximately 4.5 hours and I know I got a low save from less than 10 feet.) The flight originated from Barstow-Daggett airport and landed in Ludlow CA. This model was lovingly referred to as "rent a wreck" and was flown by Alex Bower when he qualified the the US soaring team in 1982. The day of the X/C flight is the same as the day Gary Itner went 77 miles with "Little Pidgeon" to break the WR and set a new US Nat. record for X/C distance so all the pictures were of Gary and his model. There were 2 or 3 previous Gemini prototypes but the kit version would take a 12 volt winch launch with no problems. The 15% Bame airfoil also had the distinction of being un-stallable at the limits of the Balance (8 degree AOA if I remember correctly) in the Princeton Low speed tunnel. I maintain that it would fly as slow as the Paragon if you knew how to do it and with a couple of pounds of ballast. Alex made the first sub 20 sec 4 lap speed run in the US during practice for the team selection. Both Don Northern and Kieth Kendrick made larger versions of the Gemini and were very successful in contests with them into the nineties. It is a great subject for a NOS or Woody model. This is my favorite of all of Ed Slobod's designs and is simply an outstanding wooden sailplane.
JDK - 02/01/2018
Add a comment