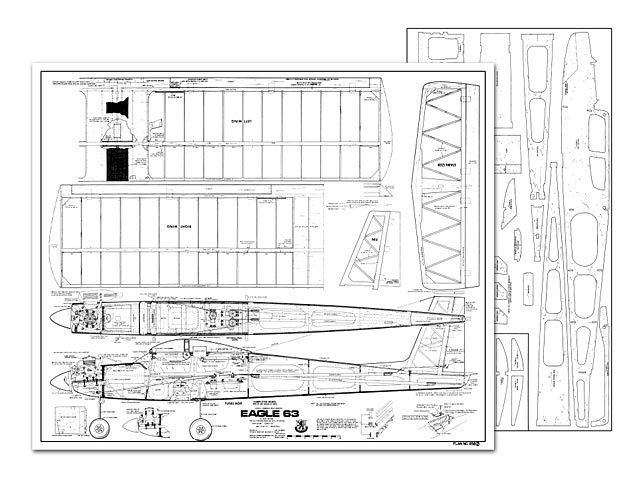 Quote: "The growth and diversity of modeling is a never-ending, fascinating phenomenon. At first, practically all models were rubber powered free flights, and simple in structure. Then came control line which was an instant success and, much later, radio control. Improving the first crude radio equipment turned out to be a much more difficult situation, and many years passed before the technology advanced to the point where it could become a popular sport. Nowadays, a modeler can go all the way from tiny peanut models to giant scale jobs, from racing ships to sailplanes, and from sport ships to precision pattern models.

Along with this, so many people have been getting into modeling without a long apprenticeship, that there has been a real demand for simplification and prefabrication. The Eagle is intended to meet these criteria. Essentially, it's a conventional looking ship, with see-through cabin for appearance, extremely simple construction, and toughness created by considerable use of plywood and hardwood.

In spite of using these materials, the ship is surprisingly light, less than most balsa models of the same size. The lightness, combined with the high lift flat-bottom wing section, makes the ship capable of the slow flight a beginner needs to go along with his slow untrained reflexes. The Eagle has no trouble maintaining altitude at well under half throttle on a K & B .40, yet it can really go when the engine is opened up. It has been flown very successfully on an O.S. Max .20, as well as having been wrung out with a real good late model K & B .61 (we were trying to break the wing with dives and sharp pull-ups). The HB 40 PDF has also given excellent results.

Overall, besides being an easy to fly trainer, the Eagle makes a very good sport ship - quick to build, tough enough to stand up to the rigors of lots of flying, and very maneuvorable. It has been flown with three different dihedrals - low dihedral for the advanced sport flier, medium dihedral for the average modeler, and high dihedral for three channel equipment. Low dihedral, of course, is best for inverted flight and certain maneuvers such as stall turns. Most people undoubtedly will fly it with four channels, but it does fine as a three channel bird, too. The equipment we've used has been Futaba and Kraft, and the final model has Airtronics' equipment. All of it has done well. Most of the flying has been done with the K & B .40 and an 8 ounce Sullivan tank. It takes a 10 ounce tank easily and even a 12 ounce tank with very little difficulty. An outstanding feature has been that it's not particularly sensitive to the CG location. We moved the CG back and forth, and anywhere near balancing on the main spar works out well..."

Update 27/08/2016: Replaced this plan with a clearer copy that also now includes previously missing 2nd sheet of formers, thanks to Circlip. 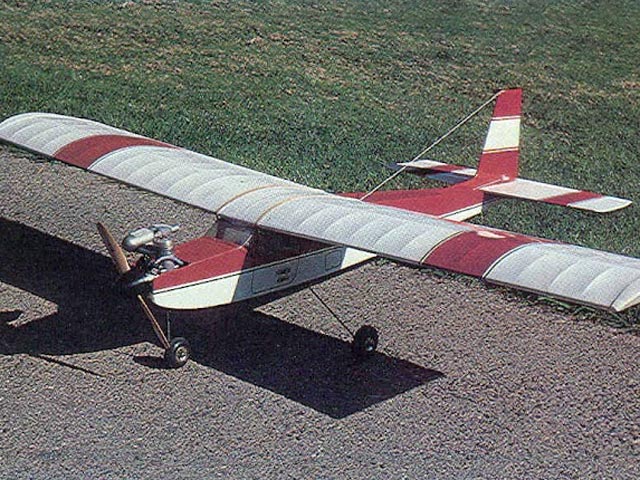