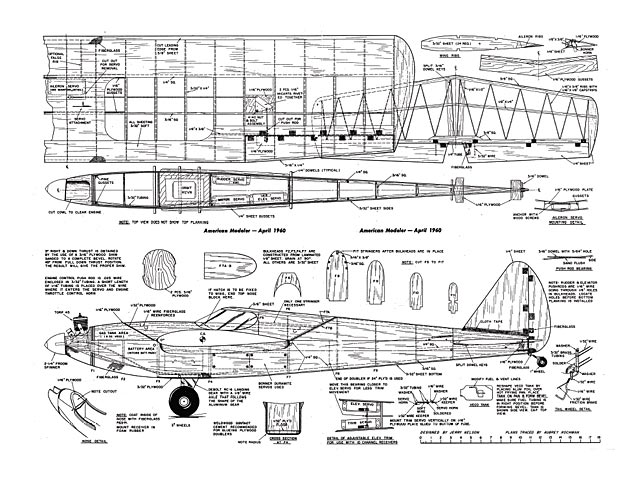 After successfully flying single channel radio control plane models in competition for several years, I decided to go into the multi channel class. So I built a few of the popular multi models. These were successful but each lacked something in its flying qualities that I desired. To me their common faults were excessive weight, poor wind penetration, and difficulty in performing maneuvers consistently. I decided to design a model to meet my own specifications. This led to the development of 'Pegasus.'

Of the several basic types available (high wing, shoulder wing, low wing, biplane), I chose the shoulder wing. This design has excellent turning and rolling characteristics since the force arrangement is located evenly around the longitudinal axis. The engine thrust line, wing chord line, stabilizer chord line, and the center of lateral area are approximately on that longitudinal axis. As a result there are fewer built-in forces you must overcome to bring about a change along the longitudinal axis. This force arrangement shows its advantages in consecutive rolls. The rolls are very consistent with a constant rate of rotation.

Structurely the shoulder wing is simpler to build than a low wing or a biplane. The low wing has its landing gear problem and the biplane has two wings to construct.

Another important factor favoring the shoulder wing is its good ground handling characteristics. The design has its CG relatively close to the ground which prevents upsets due to a cross wind.

So far, I have built six versions of Pegasus. Model A had a bubble cockpit arrangement and cowl patterned after a Long Midget racer. The engine was mounted on its side in one of the cheek cowls. Span was 70 in and the chord 12 in. Radio equipment consisted of an Orbit 8 channel receiver and Bonner servos. Engine was a Torp 35. The ship which weighed 5-3/4 lb proved to be very stable and capable of doing all the maneuvers. But the design had one serious drawback. Rudder action was very poor. I enlarged the rudder and cut down the fin which helped greatly.

When I eventually clobbered my Pegasus due to a pilot error I decided the next one would have several changes to simplify construction. I eliminated the cheek cowls and simplified fuselage construction. A breakaway mount was em-ployed as per Smog Hog (oz671) instead of radial firewall mount. While the changes didn't alter flying qualities, the ship wasn't as lively due to an extra pound of weight resulting from construction differences. This was the entry I flew to 7th place at the '58 Nationals.

Model C featured a stab lowered about 1-1/2% to allow incorporation of a Bonner steerable tailwheel and brake assembly. I employed an elliptical stabilizer just to be different and went back to the radial type firewall to save weight. The stabilizer location changed the elevator action greatly. Down elevator became very sensitive. Outside loops were difficult because the ship wanted to roll out at the bottom. This version also had a very noticeable yaw when rudder was applied. In spite of these bad characteristics, Model C placed second at the 1958 West Coast Championships.

I wasn't satisfied, of course, so the D version was built. The D was quite similar to the C except the wing was changed to a 63 in span with a 13 in chord. The rate of roll was not noticeably different. The 'Outsides' were still difficult. Main difference was better wind penetration. I could fly in 25 mph winds without any trouble at all. This ship did not last long - the B battery lead broke and she was washed out.

I decided to change the canopy on the E model to permit use of flat celluloid sheet. I also enlarged the stabilizer area. The new canopy design (like the present version) improved the rudder action. Its streamline shape apparently produced a better airflow over the rudder. The larger stabilizer improved those outside loops and made the ship fly very smooth. Elevator action was still sensitive, however. After I had flown this for a while the Torp 45 came out. Naturally I wanted to try this engine. The result was spectacular. The ship would climb at a 60 degree angle. After adding more down thrust and down trim, I could handle the extra power easily. Many new maneuvers were possible - square inside and outside loops, vertical eights and rolls, plus many a wild one! Matter of fact it was just too active. I decided that the E was just too small to handle the 45. For successful contest flying you need a very smooth and steady flying ship. If your ship is excessively fast, the judges can't rate your maneuvers. So I enlarged Pegasus slightly to take advantage of the 45's excellent running characteristics.

With model F larger, I could increase the strength of the design since I could cope with the extra weight. The wing was stretched to 70 in with a 13 in chord; 3/32 sheet instead of 1/16 was used for the wing construction, 1/16 plywood doublers went into the fuselage. The fuselage tail moment was lengthened and the stabilizer span increased. I also went back to the raised stab mount to cut down the elevator action. Model F is the final version of Pegasus; I feel that this version is 'it.'

Pegasus 'F' will do all the maneuvers in the book. Inverted cuban eights, four and eight point rolls, square loops, vertical eights, and many others. Inverted flight characteristics are excellent. You can do the entire AMA stunt pattern from inverted flight. With the ailerons, direction control while inverted is no problem because the ailerons are not reversed when inverted. To maintain inverted flight just tap 'down elevator' every hundred feet or so. If you are using a 10 channel radio with elevator trim, just put in some down trim and you won't have any problems at all.

Because Pegasus is capable of all of these difficult maneuvers, you might think it is a tough ship to fly. This is not true. Naturally if you hold the ailerons on you will roll, but if you just remember to tap the ailerons you will find Pegasus is very easy to handle. It has excellent stall characteristics which make it good for the novice. I know of several beginners who have built the design as their first multi ship with splendid results. There are several 5 channel .versions of the Pegasus flying. With the 5 channel versions you have to increase the dihedral slightly. With a simultaneous 5 channel receiver you can do all maneuvers 'except a 4 point roll, assuming your 5 channel radio will be working rudder, elevator and engine control.

I feel that a few hints on how to trim and fly Pegasus thru some of the various maneuvers would be helpful..." 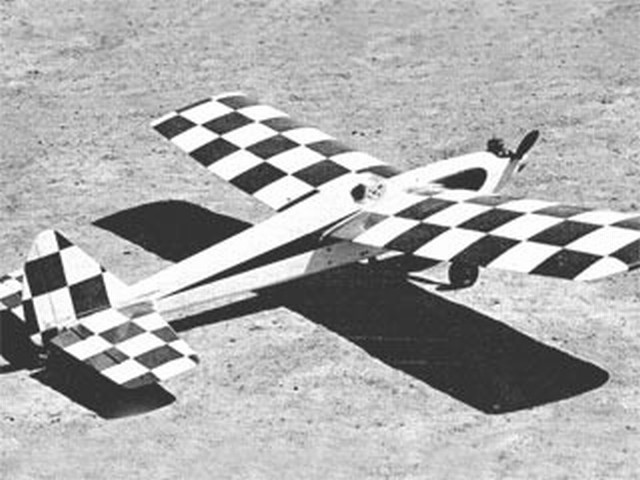