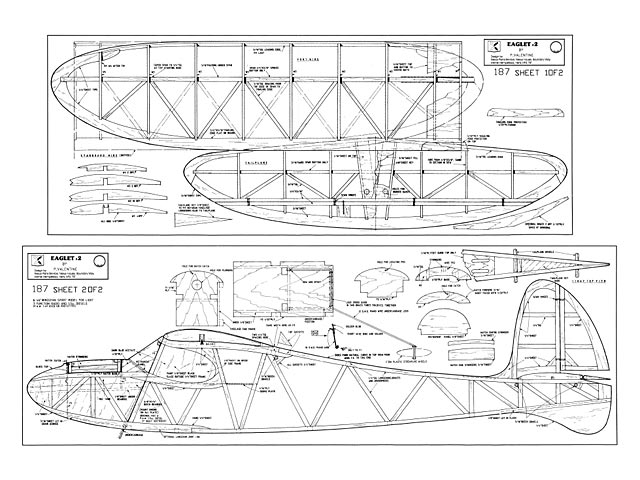 Quote: "Based on the KK 'Eaglet' rubber powered model as I think you have in your program. This plan has been blown up to 47in wingspan for 1 - 1.5 cc engine and RC control. A very nice model, I have built one myself."

Quote: "Vintage design based on the Keil Kraft Eaglet (oz597) rubber powered model. 47 inch wingspan for one to three function radio and 1.00 to 1.49cc engines. Eaglet x 2, by Peter Valentine.

Peter is a very modest gentleman, although he has many inspiring designs to his name - not least the Micro Mold 'Lark' helicopter. In his write-up for the 'Eaglet' he did not mention the flying qualities of the model. Having had a 'twiddle' on the sticks I can assure readers that it is a delightful aeroplane to fly. It performs very much like a well bred trainer, indeed it would be excellent for that purpose. Control responses are positive without being vicious and the Eaglet has a modest flying speed. Design of the Eaglet follows the prototype in philosophy and essence, resulting in a light but strong structure. The undercarriage has been shortened and the wing incidence reduced, otherwise it follows the lines of the original. Our thanks to Amerang Ltd for giving us permission to publish this design.

Raison d'etre. The Eaglet x 2 design was chosen originally as a suitable vintage aircraft for my old FROG 175 petrol engine. For the prototype ! used a single channel with an old Elmic Commander escapement, which eventually, in its customary manner, jammed and sent the Eaglet spinning to earth.

I rebuilt the fuselage front end and replaced the escapement with a servo; but still using the escapement torque rod system. This works well. Eventually the FROG 175 was changed for my old FROG 100 diesel and in this form the model was taken to Old Warden for the Golden Era gathering. To my surprise a gentleman, heavily disguised as a Black and White minstrel, presented me with a cup!

The possibility of the Eaglet's appeal to other people prompted me to design a MkII. This had elevators and throttle control incorporated. Since few people still have old Frogs in working order, a PAW 1.48 with throttle and silencer was fitted.

Fuselage. The 1/4 in sheet parts can be transferred to the balsa using the tracing paper/carbon paper system. Cut them out oversize and sand to shape in pairs. Build one fuselage side first over the plan protected with a sheet of polythene. Cover the finished side with a further sheet of polythene (Solartex backing) and build the second side over this.

Wings. The trailing edge is laid flat as the original rubber model. Epoxy the spruce spars (Balsa Cabin) together, using the 1/32 in dihedral braces before constructing the wings. Pack up the spar as indicated on the plan. Build the 1/4in, sheet tips before fitting them to the wing..." 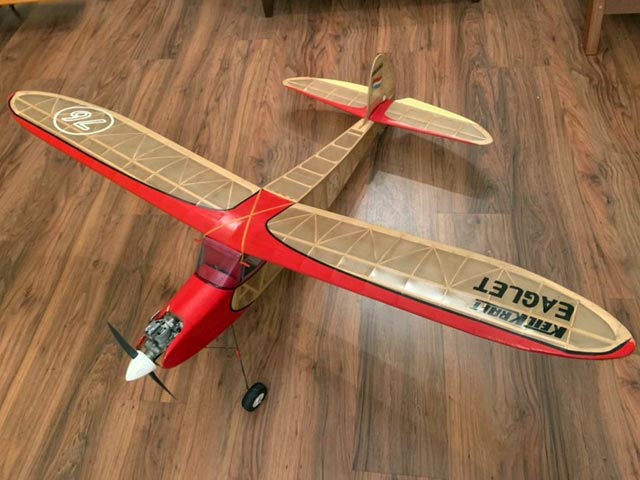