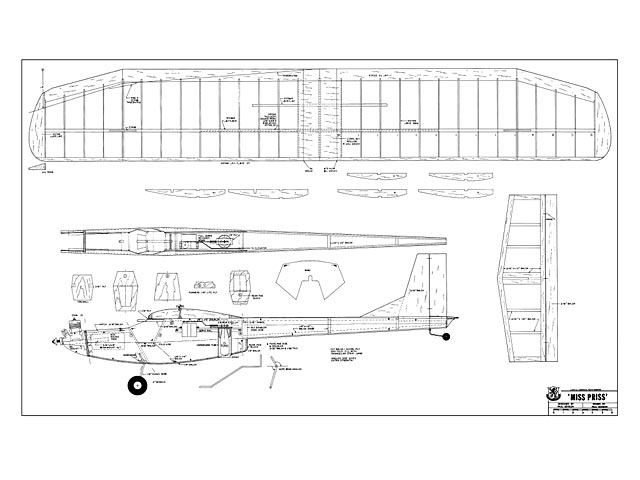 Quote: "Miss Priss was designed for a number of reasons, first and paramount was simplicity; anyone can build it. Secondly, hands-off flying; it makes a fine beginner's plane. Third, everytime I picked up a pencil the sketches always looked the same, just like Miss Priss.

For stability, it had to have a high wing with polyhedral and to have a low Center of Gravity, it became a cabin job. In order to make take-offs easier, the long tail moment was necessary. There are some of us who do not have tall waving grass, short stubby grass, or even green concrete. We fly from a brown concrete called adobe and wheels are a necessity. If you want to fly it occasionally without wheels, they are easily removed, however, we would advise a landing skid to keep the grass stain off the bottom of your fuselage. Much of the time, even though we fly with wheels, we do not bother with a standard take-off, just stand back and heave it into the air.

Miss Priss may be considered to be a motor soarer, the 5 ft wing makes up in chord for what it lacks in span. The wing area is almost identical to many 2-Meter gliders. She held up well, wheels and all, with a Windfree (oz1637) and a Drifter II (oz572), both of which had auxilliary engines. In fact, we were surprised how well she really did as a thermal machine.

The bomb carrying capability came about as a necessity: our club always has a bomb drop event in every fun fly. The club members are so good, the CD recently inspected one plane for a Norden Bomb Sight, the pilot was so accurate. We have discovered that with the slightest breeze, low throttle and full up elevator, Miss Priss will almost hover. Can't you see the technique, just hover over the target and, when ready, flip in full down and the bomb scores a perfect hit. Please watch the plane, not the bomb so you won't be the first to score a perfect hit with both the bomb and the plane.

After loading the bomb, please check elevator movement with full up to make sure the controls are free. We loaded the bomb, checked movement up and down and, of course, the bomb dropped out on the flight box. So nothing to do but reload; this time we were smart and did not check movement. Sure enough, the bomb was in crooked and the controls were locked in, full down. The flight following a hand launch was the shortest on record. Fortunately, only the prop and the ego suffered any damage. (PS the wing does pop off with a quick stop.)

Miss Priss is a beginner's plane, both building and flying, but if you have never built a R/C model we would strongly recommend you purchase the RCM Flight Training Course Vol 1 from your hobby dealer or directly from RCM. This publication will prove invaluable to you both for building and flying. It will become a basic text for your R/C library. Read it from cover to cover - then you will know where to go back and check when you get in trouble.

The wing is simple and straightforward; it is built flat then joined with polyhedral later. Always cover your plans with a clear plastic wrap or waxpaper. Lay down the two center section leading and trailing edges, bevel them slightly where they meet on the centerline, pin in place, bevel and add all bottom spars. Then put in the bottom sheeting and glue in place. Wing ribs 1A are added on top of the botoom sheeting. Install all Number I ribs between leading and trailing edges. The TE is notched with three thicknesses of hacksaw blades. When you have finished the'center wing sections, build the tip sections. Slant the ribs to match the polyhedral lines and glue in place where the sections join. Add the top spars and allow these sections to dry thoroughly, then add the center section to sheeting.

To assemble left and right wing halves, prop each tip up 4 in from the workbench; be sure and glue the small dihedral braces to the bottom spars. A clearance notch must be cut in each.of the two adjoining Number I ribs for this brace. The two halves are butt joined using epoxy. After sanding, the center sheeting top and bottom will be covered with 3 in fiberglass tape..." 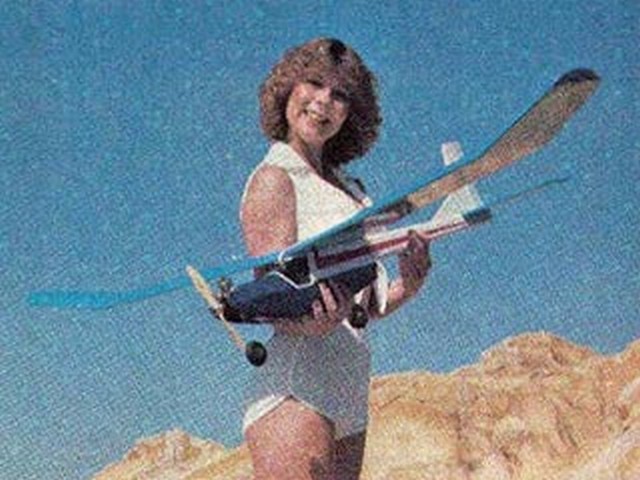 In the midst of building, some notes about the plan:
1) The rib profiles for the tip, B 8 C are the same height but different lengths. Rib C needs to be sanded down to properly step down in height for taper
2) The rib profile for the 16 Rib 1's is captured in the fuselage side view. The Rib 1 that is shown as a separate template is only for the 4 pieces used on the 3/8"x1/2" sub-spar
3) The slots shown in the trailing edge are short relative to the ribs by 1/8"
4) The Rib 1 template sub-rib notch is incorrectly sized at 1/4" by 1/2" and will not locate properly until the slot is corrected
5) The angled formers make aligning the fuselage a nightmare, especially if, like me, you don't have really wide plywood to make the fuselage doublers out of and choose to build separate top and bottom sides. I'd recommend adding former locating strips to the sides before assembly. Also, a fuselage jig might be a fine idea to keep the thing true as you glue.
6) Currently available dust bombs are too large for the German-style bomb bay shown on the plans. Rather than fab one from scratch, I plan on wing-mounting bomb releases that came with the commercial dust-bombs.
Darwin - 28/05/2020
I am pleased to submit two of my photos of Miss Priss [more pics 004, 005]. The model is constructed as follows: Fuse and tail empennage. Assam wood sticks with plastic film cover. Ribs --- 2 mm ply. Wing covered with plastic film and ironed. Model flies very well -- great for slow flying with OS 25 engine.
Dinesh Kittur - 11/07/2020
Add a comment