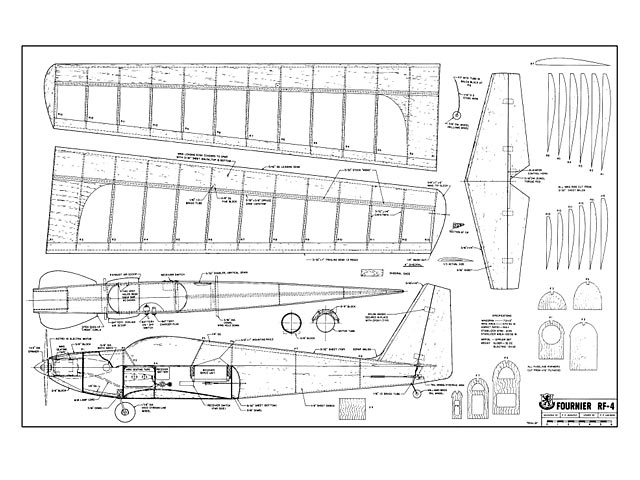 Quote: "Combining the best of two worlds, the Fournier uses electric power to find its place in the sun, followed by the silent majesty of flight that can only be experienced by the soaring pilot.

This Fournier RF 4 was especially designed for the Astro 10 electric motor, and with this propulsion system the plane flies very realistically. For example, take-off consists of a straight run followed by a few low hops culminating in a gradual climb-out. One pass around the field is usually enough to gain pattern altitude. The ship will loop from level flight and do near perfect wing-overs, especially to the left using engine torque. Rolls are not possible without ailerons, but snap rolls and spins are possible if large elevator deflections are used. The ship will thermal even at the high gross weight associated with electric propulsion (52 oz) since, even at this weight, the wing loading is only 13 oz per square foot. Flying speed is quite low and the ship is very stable in flight.

With the power plant removed, the ship has been flown as a slope and thermal sailplane. The radio battery was placed in the motor tube and the radio moved forward over the CG. In this configuration the ship thermals well and is a striking change from the run-of-the-mill sailplane. The tow hook was placed to one side of the landing gear strut.

Although designed for electric propulsion, for those of you who wish to put a glow engine in this plane, I suggest a .10 or .15 be used. A throttle is not actually required, unless desired, as dead stick landings are a cinch with the excellent glide ratio of the RF-4.

The new three channel radio systems are well suited to this design. It has been flown with ailerons which work well (use 1-1/2 x 15 inch ailerons) but they do detract from the thermalling ability. The aircraft is a crowd pleaser and fun to fly. It can be hand launched if no smooth runway is available.

I hope you enjoy building and flying the Fournier RF 4 as much as I have, and wish to thank both Dave Shadel and my brother, Bob Boucher, for their many helpful suggestions and assistance in designing, building, and flight testing this new aircraft. My special thanks to Bob for taking the prototype to the 1973 Nationals and entering it in R/C scale where he aptly demonstrated its realistic flight characteristics under electric power. Now let's get on with the construction.

Constructing The Wing And Tail. Begin the wing construction by taping the wing plan to a flat board which should measure at least 12 x 36 inches. Remember, your completed wing will only be as straight as your building board! If you use a 72 in board you can build both wing panels simultaneously. Now, cover the plan with a piece of Saran Wrap or similar product. Do not use waxed paper.

Carefully select your wing sheeting, making sure to match them as closely as possible, and pin directly over the plan in the correct position. Next, butt glue a 3/32 x 3/8 x 36 in hardwood spar to the aft edge of the bottom sheeting... " 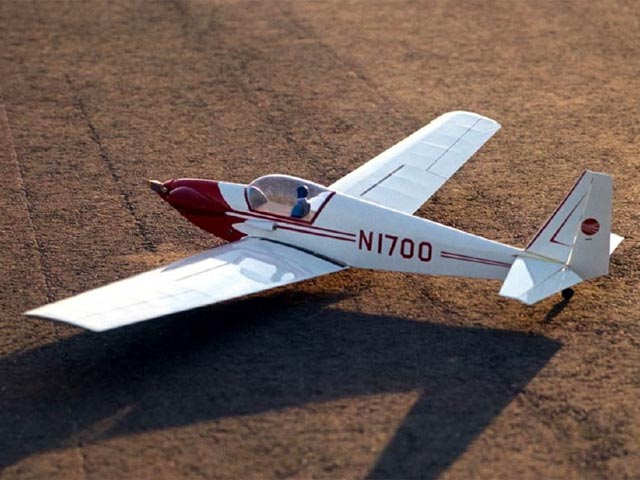