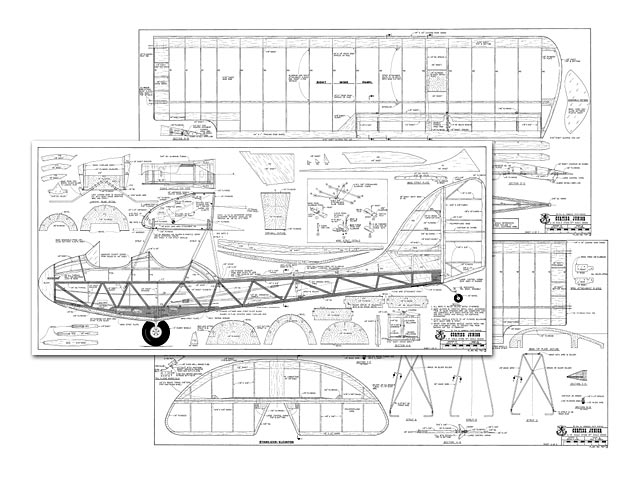 Quote: "I have always been partial to aircraft of the 1920's and 30's. My first airplane ride was in a Travelair. During this time, my father was flying Boeing 80A Tri-motors, Ford Tri-motors, Stinson Tri-motors and Boeing 247's for National Parks Airways (later to become Western Airlines). No doubt, his tall tales of the 'good old days' has influenced me to some degree.

Slow flying Quarter Scale models remind me so much of the aircraft of that era that it was just logical to model one. My interest was really brought to life when, acting as coordinator for the EAA Lindbergh Commemorative Flight, I had the opportunity to observe the Spirit of St. Louis and Stinson Junior in flight. These two planes were just magnificient to observe in the air. This was real flying - not just boring a hole through the sky.

I immediately started looking for drawings of the Spirit, but it had been modeled and kilted so many times I lost interest. The Stinson Junior had good possibilities but it was a large airplane. A little more model than I had room for. While looking through my Dad's old photos of airplanes he had flown through the years, I came across a photo of myself, at age 2, sitting on my mother's lap in the rear cockpit of a Curtiss Jr. This was it. I just had to model this one.

That same evening I located a copy of Paul Matt's Curtiss Jr. drawings in the Historical Aviation Album, Vol. 11, and started enlarging them. Before the weekend was over, I had the fuselage framed and was working on the tail. Days turned into weeks and the weeks became months. Progress was interrupted for a trip to Oshkosh for the annual EAA fly in. My Dad and I flew up in his restored Piper Tri-Pacer. (Judged best in its class at the 1977 EAA fly in.)

Upon our return, it was back to the Curtiss. It is now mid-August. The major framework was complete. The plane looks ready for covering, but much work remained. Time was lost trying to decide how to run the functional control cables from the tail to the servos - more time on what engine to use. Where can I find a left hand prop? Will I have to carve one myself? No way to fit a prop drive into the small nacelle and keep the propeller in its proper place. A Webra .60 will fit, but I doubt that it will fly a plane projected to weigh 16-19 lbs. How about that old 0 & R Generator that was put up for 'some day'? It's heavy, but maybe with some work it can be made to do the job.

Stripping the engine down we discarded the cooling shroud, generator, and fuel tank, and turned the flywheel to remove the cooling fins. Along the way, we decided to mount the prop on the flywheel. This was the strongest end of the double ended crankshaft. This was too easy. Watch out for Murphy's Law - here it comes - engine rotation is clockwise. Well, it was a good try, but Murphy loses this round. If we put a conventional prop on the engine backwards and run it clockwise..."

Update 02/07/2015: Replaced this plan with a much clearer copy (fixed missing central bands), thanks to JPM. 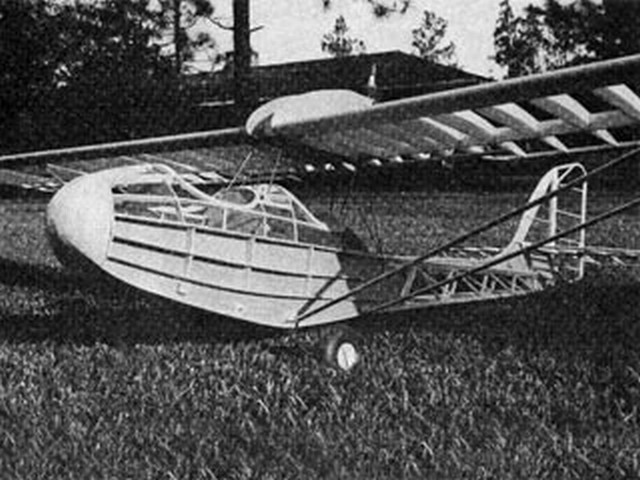