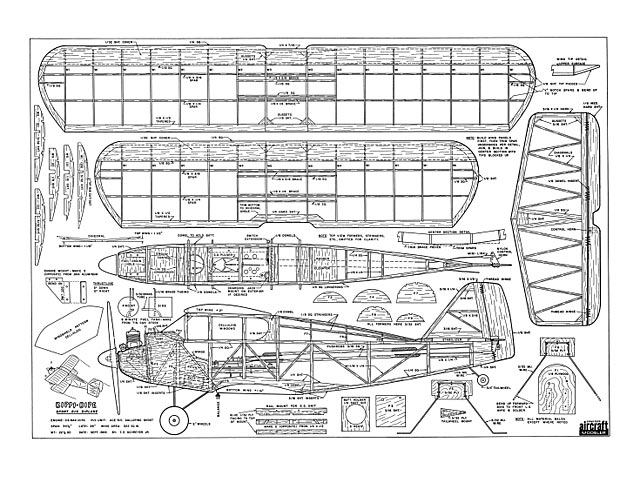 With the rapid development of the multi-proportional radio control systems in the last five years, the simpler and less expensive types of RC modeling have suffered from a lack of publicity and suitable model development.

The RC rudder-only, rudder/motor, and galloping ghost unit types, however, do have certain advantages that more modelers should be making use of - light weight, small size, low cost and easy installation. The GG package offers three controls: rudder, elevator and motor - with a total airborne weight only slightly more than many rudder-only units. By comparison, a proportional three-channel outfit is twice as heavy, twice as bulky, and more expensive. And, of course,, it is much more sophisticated in control action. However, for many model applications, the RIO, R/M, and GG systems are just the thing.

The Bippi-Bipe is a small, compact biplane designed to utilize the advantages of the galloping ghost RC units now available. As a biplane, it also offers more of a challenge than the usual trainer-type GG model. The Bipe is a sturdy model with good flight stability, but capable of fast and exciting stunt flying as well.

A notable feature of the design is the cabin fuselage which provides plenty of room for the RC installation and a sturdy mounting for both top and bottom wings. The constant chord wings are identical except for length and center section. The top span is 34", length is 29", weight about 22 1/2 oz., with a wing loading of about 10 oz.-sq. ft. The engine installed is the O.S. Max 10 RC which is lightweight, provides good top power, and throttles very well to a low idle.

The radio gear used is the packaged galloping ghost unit manufactured by Ace Radio Control, Inc. The airborne equipment consists of Rand GG pulser and switcher, Commander DE superhet receiver, and 2.4 V NiCad battery—weighs a scant 5 1/2 oz. Originally, the Jansson GG No. 2 transmitter was used, but was replaced by the Dickerson Pulse Commander Tx .when this much-improved unit became available. The Pulse Commander is not only electronically better, but is smaller and has better balance—so important for one-handing it while launching the plane. In all, the GG system is an enjoyable way to provide a lot of control.

Wonder why it was named the 'Bippi-Bipe'? The 'Bipe' should be self-explanatory - but the "Bippi"? Ever listen to a GG Tx signal on audio monitor and hear the bip-bip-bip? That's why. Any questions, Goldie?

The basic design for Bippi-Bipe had its beginning a number of years ago with an 049-powered free-flight Sperry Messenger (the obscure aircraft which became so popular that one magazine ran three different models of it). The Messenger was eventually converted to rudder-only RC, but there were problems of poor wind penetration and, together with the added weight, a lack of lateral stability, and finally, an upper wing mount beyond repair resulted. The latter problem was solved by building on a cabin and turtledeck. By cutting off about 30 percent of the lower wing area and adding rounded, up-turned wing tips, the speed and stability problems were eliminated. It flew well, even when an 099 engine was tried for power-plus flights. On high throttle Bippi is rather fast - so a beginner may 'get behind the airplane.' More skilled hands will love its stunting.

From this much-modified little rudder-only biplane that afforded us so many enjoyable flights, two offspring resulted. The first was a flying scale of the Waco YKC-S (oz1215) cabin biplane which had surprisingly similar design areas and moments. The second was the Bippi-Bipe, which was a slightly enlarged and streamlined version, intended for the three-control galloping ghost RC system and a 10 size engine.

Bippi-Bipe is not recommended for the beginner, however. For one thing, trimming out a bipe is not always the easiest thing, even for experienced modelers. Since the Bipe moves pretty fast in high throttle, a beginner would invariably find himself playing catch-up with the controls - this just isn't much fun.

Construction. The plan should be studied well before beginning to do any construction work. A few revisions were made of the prototype: additional rudder and elevator area for more positive action; rounder wing tips for better efficiency and looks; battery and GG unit moved forward for balance. Not shown on plan, but an excellent idea, is the addition of a six-inch length of 1/16 dowel inserted into the extreme trailing edge of the top wing at the center section to keep the rubber bands from digging into the balsa.

This model is quite easy to build since it has standard balsa construction without any difficult or uncommon procedures. The wood should be medium or medium hard, unless otherwise noted; by building carefully, a strong, yet lightweight, model should result.

Build two sides on the plan from 1/4 sq and 1/8 x 1/4 strips including the 1/4 sheet parts around the lower wing mount area. Join the sides at the rear, and add crosspieces to form the box-type fuselage. Then add formers, firewall, plywood landing gear mounts..." 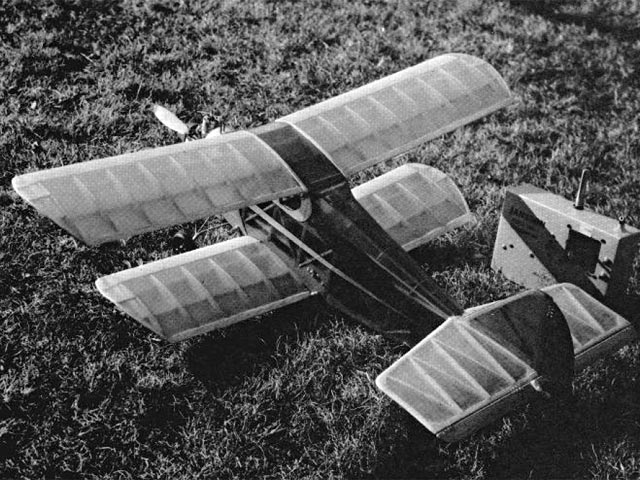