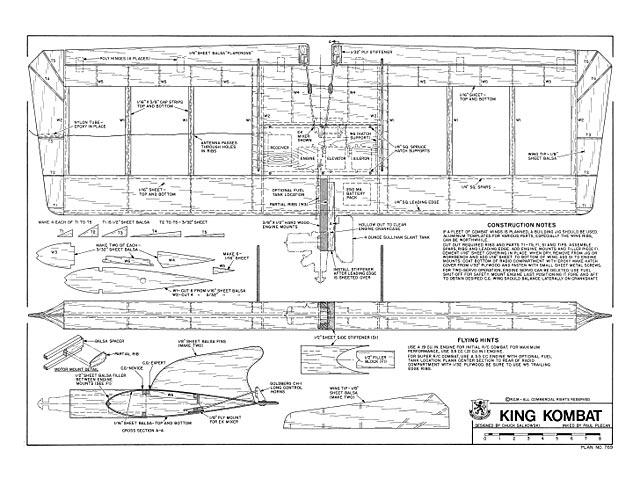 Quote: "Can be built for less than $10.00 worth of materials. Not only that - after the parts are cut out, King Kombat can be assembled in four or five hours.

I'll never forget our first attempt at combat. Both Dick and I are by nature aggressive flyers and we went after each other with a passion. We became so completely drained after those first few matches that we had to pause between each match in order to collect ourselves. It wasn't long before we were completely hooked on R/C combat and from that point on, we started many modifications to try and get that extra edge.

Dick tried a smaller wing and also thinner wing tips to get more speed, but found that he lost too much in maneuverability. Our wings at this time are able to climb straight up and make close to a 12 foot diameter loop without slowing or stalling. Dick has modified the airfoil slightly by moving the high point to the rear. In this way, he feels that the CG can be moved toward the rear and he claims to get a little better maneuverability.

I won't go through much construction detail. After all, you only have a wing to build and only one set of control surfaces. You don't have to worry about setting your plane on the pool table to carefully align tail and wing surfaces. As a matter of fact, all you really need is a template for the wing ribs and some indication as to how far to spread them apart. From that point on you can use any building technique that you like.

Start by pinning the lower main spar and bottom trailing edge sheet in place on the plans. Glue the ribs in place. Add the top and leading edge spars. The motor mounts are pre-assembled with the 1/2 in balsa spacer between the hardwood mounts. Glue the partial ribs to each side. Notch the balsa filler to match the partial ribs. Fit entire assembly in place on the plans and glue. Add planking, capstrips and wingtips. Shape the motor mount stiffner to fit over the leading edge of the wing and glue it in place. Complete the hatch compartment. Don't forget the holes for the antenna leadout. (I forgot this once or twice and believe me, it's rather difficult to poke holes through wing ribs after the plane is covered.) We use MonoKote, although we have used Solarfilm, Coverite, and even silk and dope very successfully. Don covers the open area only and uses a resin or epoxy filler on other surfaces to save costs.

Cut 3/16 wide slots in the covering and epoxy the vertical fins in place. Dick uses one fin in the center, but somehow working linkage around a center fin doesn't appeal to me. Don uses wing tip plates in place of vertical fins. He claims much more stability during launching with very little loss of high end performance. I use an aluminum template for cutting out wing ribs and then I have a building fixture, which is merely a sheet of 3/8 plywood with wooden blocks glued in place to position the wing ribs. The trailing edge is also blocked up. I build the entire bottom side of the wing in this jig.

I have a separate jig to build the top side of the wing. I use an aluminum form with sponge weather stripping to hold the leading edge planking in place for gluing. This is held to the wing jig with rubber bands. This reduces building time considerably and I end up with an absolute straight wing, which we find is important if you want the plane to do perfect loops instead of corkscrews. This also comes in handy when a portion of the wing must be rebuilt after a mid-air or other damage. Only the required portion of the wing is built in the jig and is conveniently attached to the original place with perfect alignment..." 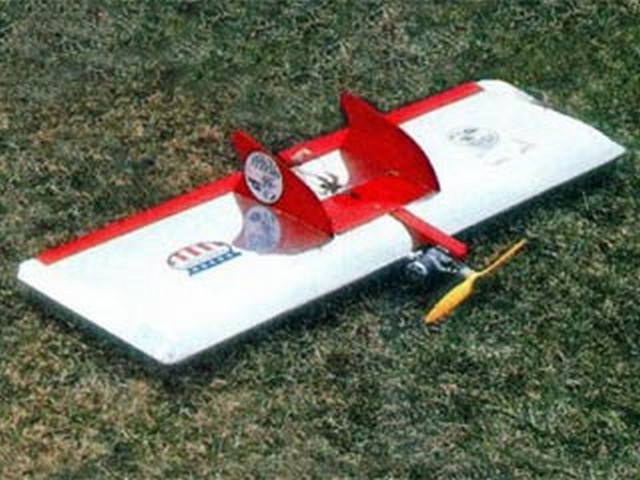 Hello friends, I commend your commitment to the most beautiful hobby of all. I'm sending you pictures of my 2nd Kombat King [more pics 004, 005]. After the loss of the 1st one I had to build it again. He flies really well.
CarlMichaelNowak - 12/09/2017
Add a comment