Quote: "If your favorite time in aviation goes back to the golden era of home-builts, this vintage type, three channel sport trainer for .19 to .25 engines is for you. 30's Sportplane by Paul Denson.

There are times in your life that stay favorites, no matter what progress is made, or how things are improved. My favorite time in aviation is the era of home-builts, the Thirties. I guess this started way back when I took my first airplane ride. A nondescript biplane, not a home-built I am sure, landed on the 17th fairway of my father's golf course. It stayed there for a week, just off the edge of the golf course, using the fairway for a runway. The pilot took golfers up for a ride to see what the golf course and city looked like from the air. It must have been lucrative because of the length of his stay. When he would leave the plane in the evening to go to his hotel room, my brother and I would crawl over and look at every square inch of that plane. I guess we flew that plane thousands of imaginary miles, taking turns in the rear cockpit.

The most amazing thing about that generation was the ability of those
pioneers of aviation to build and fly their own machine. Swanson, Long, Heath, Dormoy, Pietenpol, those flyers fabri-cated everything themselves. Oh yes, there were companies in those days that sold parts and supplies for building air-planes just as there are today for model plane building, however, you didn't go to the hobby shop, you ordered by mail, and waited impatiently for the parts to arrive. They used everything from Model-T to Harley-Davidson engines for power. If it wasn't quite suitable, they would take two Harley cylinders, build their own crankcase, and call it, what else, a Harlequin.

As a boy, I am sure I built every kit that Comet put out; the Rearwin Speedster, Art Chester's Jeep, Gee Bee, the Taylor E-2 Cub and even the Aeronca C-3, In the late 30's-early 40's, Cleveland put out a kit for a Heath LNB-4, I remember building it then and recently I found a set of the old plans and scaled them down to 12" wingspan and built a P-Nut Heath LNB-4.

Off and on I have been working on a 1/4 scale of Les Long's Parasol Longster with a Harlequin engine; if it were pow-ered with a Ross twin, the engine would almost be scale too. The ribs are built exactly like they were in the original, each rib has 64 pieces.

It would be nice to think that I took the best features of a group of home-builts and incorporated them into the 30's Sportplane. It would be nice. but I didn't. I knew I wanted it to look like a cross between a Longster, a Heath Parasol, and a Corbin Baby Ace, which was, by the way, a modification of the 1929 Heath Parasol. Probably, it looks more like the American Eagle Eaglet than any other one. I drew what I wanted it to look like and let the engine determine the size. There are .049 sport planes which are great for fuel consumption, but it is difficult to cram 3 channels in one if you want engine control. The larger engines are fuel gulpers and are difficult to transport in our compact cars. So settle for something with a small engine which is large enough in size to be seen at a reasonable distance.

Another thing of importance to me was that if flies scale speed which is sl0000w! The blinding speed of my .35 powered Skylark makes me quake every time I fly it. I want a plane with which I can relax, this is it. I have flown it the full length of the field, about 4 feet off the ground, using throttle only to maintain that altitude. I am sure the speed never exceeded 10 mph. It is a docile. sporty plane that can be flown from a small field by the newest beginner.

The whole plane is simplicity itself. To make the slab-sided fuselage, purchase from your hobby dealer a 1 ft x 4 ft piece of Sig Lite Ply, it is 1/8 thick and extremely light. Trace the outline of the side of the fuselage and cut two. Tape them together and sand them alike, then using a hole saw in an electric drill, cut the lightening holes. Cut carefully and sand neatly. when you cover with a colored transparent MonoKote they make a pretty see-through pattern. Cut out the formers 1 and 2 from the ply, mark the position of the formers on the inside of both the left and right sides of the fuselage. Lay the right side down on the plans, glue on the two formers, check with a right triangle and allow to dry. When solid, so no movement can happen, put two strips of masking tape under the right side, parallel to the formers sticky side up..." 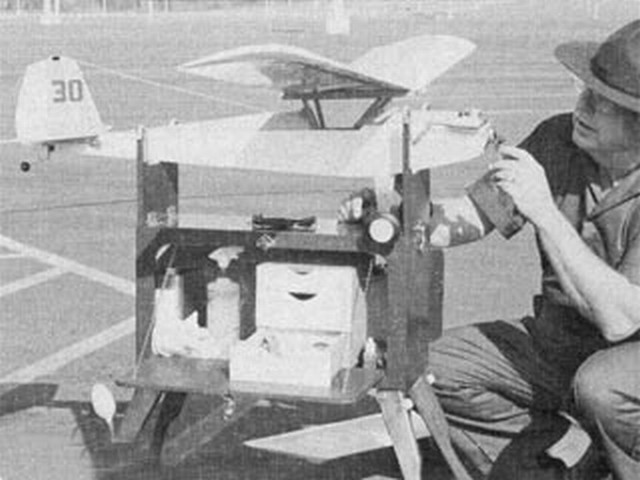