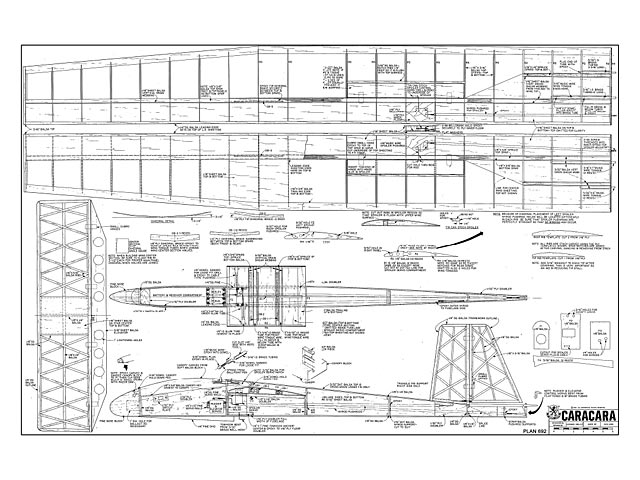 Quote: "From the deserts of the Southwestern United States comes this 126" span sailplane that can hold its own in competition circles or provide the ultimate in performance for the sport soaring enthusiast. Caracara by Leonard Oakley.

The national bird of Mexico is the very striking, black and white, eagle-like Caracara. This is the same bird pictured in the Mexican coat of arms standing on a cactus devouring a snake. With my own competitive model building and flying, originating in the Southwestern desert, where these beautiful predatory birds can be found, the symbolism in the name for this very successful sailplane is obvious.

This Caracara is the sixth in a series of models built during the last three flying seasons with minor revisions tried on each. Number one in the series was a 120 inch design which won six club contests and placed 2nd or 3rd in six others. In three seasons it has never placed lower than fifth. Models two through five were experiments in an attempt to improve upon the original. These included a 14 ft, 1500 square inch behemoth; a 10 ft, 1100 square inch job with lower aspect ratio (12.8:1); a 100 in Standard Class without polyhedral; and a 72 in straight dihedral slope soarer.

Model number six is the easiest handling and best flying design of the series. In my opinion, the main factors contributing to the success of this design are:

The design has consistently out-performed well-known kit models flown by good, experienced pilots. Perhaps its best feature is its ability to thermal hands-off in very light air when others won't. Under these conditions, every control surface movement tends to decrease efficiency and increase sink. This model's ability to turn into, and maintain, tight free flight-like circles in thermals make it unnecessary to send it continuous duration killing signals.

Hi-start launches are easy because the model climbs straight and true and consistently gets as high as any design on the field. A controllable towhook would probably be a desirable addition, as obvious thermals are sometimes missed by not getting off the line soon enough... " 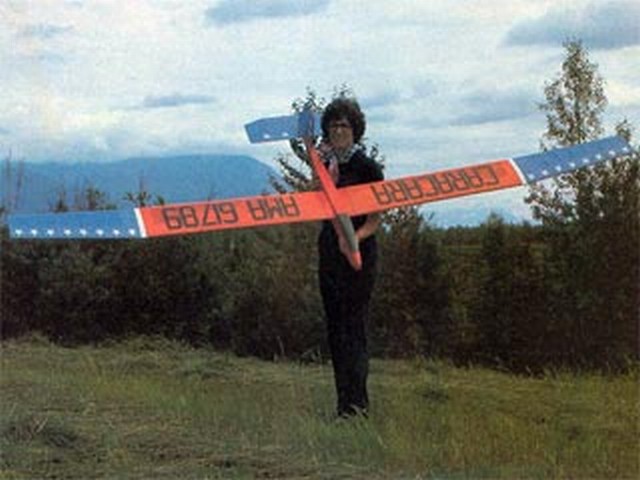