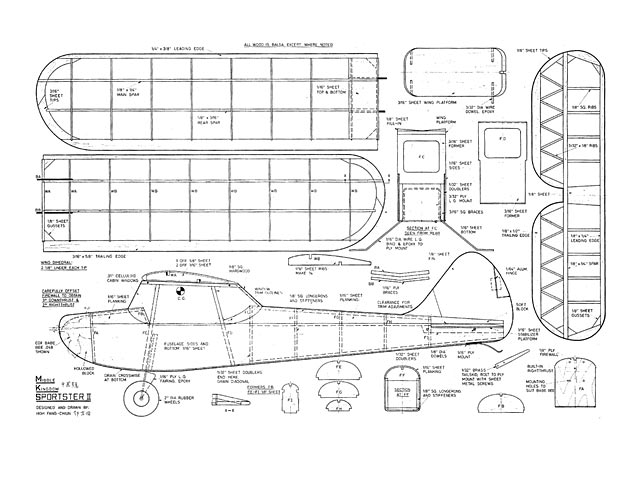 FREE-FLIGHT sport models are rather rare nowadays. Magazines no longer regularly carry features on this type of design. And from kit manufacturers new creations, if any, turn up sparsely. Reason for this, of course, is the availability of small, light-weight radio-control systems. Designs originally intended for sport free-flight purposes simply became controlled free-flighters guided with these functional, low-cost outfits. However, for those of you who are fascinated by the charming flying of free-flight sport models, this machine should he what you have been waiting for.

The MK Sportster is a pleasing ship, both in shape and in handling. Once properly trimmed, the model possesses a most realistic and stable flying performance. Also, the large-diameter wheels, located well in front of the center of gravity, provide safe take-offs and landings at any reasonable field. The model measures 39 inches in wingspan and has approximately 205 sq in of wing area. Suitable powerplants would be engines up to Half-A size. Any engine above .049 in capacity is not recommended because a big engine in a light machine always makes the flight adjustment much more tricky. Besides, there is no need to employ a big powerplant in a model of this category. Even if you install a .049, choose a mild one. The prototype was powered by an 03 (0.5cc) diesel engine. Swinging a 6 x 4 propeller, this little engine provided more than ample power for the flights, including unassisted takeoffs from grass surface.

Construction-wise, the MK Sportster is quite straightforward. The plan, showing Mark II of the design, differs from the prototype only in minor aerodynamical improvements and slight structural modifications.

Incidentally, the letters 'MK' in the model's name stand for Middle Kingdom. Middle Kingdom or Middle Land actually is what China is called by the Chinese. Ancient Chinese thought their land was lying in the center of the earth, so in this way the country's name was originated.

Construction. Wing: Each half is built separately, joined at proper dihedral angle when ready for center balsa sheet covering. Pin down the unshaped leading edge, bottom spar, trail-ing edge and tip frame pieces on the plan, protecting the latter with wax paper. Be sure the notches are aiready cut in the trailing edge. Incidentally, when cutting these notches, make them a little undersize for a tight fit to the ribs. Cement all ribs in place except the center one..." 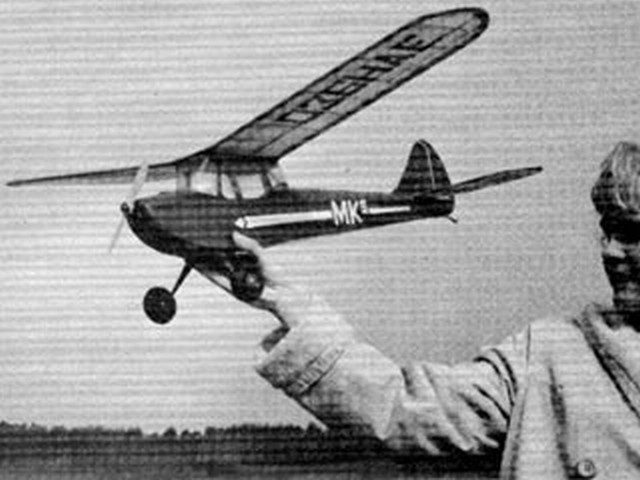