Quote: "With its gull wing and T-tail, Borne Free is a distinctive combination of the old and the new. The gull wing was popular long ago, but the swept T-tail is definitely modern. The purpose of the gull wing is to raise the center of lift of the wing high above the Center of Gravity and the towhook position, adding pendulum stability. The T-tail raises the stabilator into smooth air above the wing's downwash and increases rudder effectiveness due to the end plate effect. This combination makes Borne Free a very stable, yet responsive, sailplane.

Why were gull wings so popular for full sized sailplanes forty years ago? The answer lies in the design requirements of sailplanes in those days. Modern full sized sailplanes are designed for aerotows and cross country speed. But early sailplanes were designed to be launched from winches, to circle tightly in the small diameter thermals found at low altitudes, to remain aloft close to the launching point as long as possible, and to make a precise spot landing.

These requirements are very similar to what R/C sailplane designs strive for today (implying that model sailplanes are forty years behind their full sized counterparts). The inherent stability of the gull wing allows the pilot to fly at a greater angle of attack on the launch and, therefore, achieve greater launch height. Even a small increase in launch height can greatly improve the pilot's chances of finding lift because thermals form only at altitude and increase in size and strength with height.

After release, the pendulum stability of the gull wing means that fewer and smaller pilot corrections are needed to maintain smooth flight. The smoother the flight, the lower the sink rate. Borne Free is exceptionally stable, yet has a very low sink rate. Elevator corrections are needed only in turbulence and very tight turns: flight is virtually rudder only. Borne Free is so stable that rudder control must be applied and held throughout a turn. The plane will immediately resume straight flight when the rudder is returned to neutral. This effect can be used to advantage when thermalling in light winds. Upon centering in a thermal, the rudder trim can be cocked to one extreme, causing a turn. Then the pilot may put the transmitter down on the ground: his services will not be needed for awhile. Borne Free will circle safely and smoothly, all by itself, drifting along with the thermal. This inherent hands-off stability makes the craft truly 'borne-free'. Hands-off flights have been flown in this manner many times; their duration
limited only by how far downwind the pilot would allow Borne Free its freedom. Note that it would be possible to meet the LSF Level I thermal flight requirement without even touching the transmitter! Smooth flying is all important in minimizing sink rate. Unnecessary control surface movements and an unsteady flight attitude must ultimately be paid for with loss of altitude. It is felt that any theoretical loss of efficiency due to wing polyhedral is small, indeed, compared to improvement in performance gained by smooth steady flight.

The Borne Free design was influenced by three earlier designs: Lee Renaud's brilliant Aquila (oz5136) (R/C Modeler, May 1975), Ottar Stenbol's beautiful Ghost 7 (Zephyr, September 1970), and the free flight design S-A-TT by Scipioni (Model Glider Design by Frank Zaic, 1944). The thin flat-bottom airfoil combined with a mere 7 oz/sq ft wing loading yields a low sink rate and a floating glide, but good penetration when down trim is applied. The diamond airfoil in the stabilator is a strong, rigid and light weight construction that originated with the Orion (oz927) and Taurus (oz612) and has been used in pattern ships to gliders ever since. The vertical fin is solid cross-laminated balsa for strength and rigidity. T-tails are traditionally a problem structurally, but sweeping the fin reduces the moment of inertia about the fuselage axis..."

Article pages, text and pics, thanks to GaetanPage. 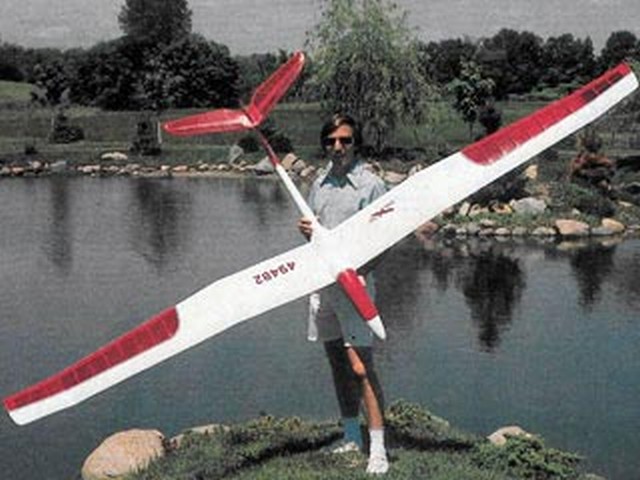 Do you have the formers for the fuselage???... I have a doubt about your mention: All Formers Complete. Unable to find them elsewhere.
GaetanPage - 14/01/2016
You don't need any former except the reference sections, the fuselage pod is made by handcarving and shaping two semi-bloc of balsa with top and side tracing as for the plan. The boom is made of two wet balsa layer wrapped around a wood lathe turned dowel. A different but common tecnique for fuselage gliders, plan is complete.
Pit - 15/01/2016
Add a comment