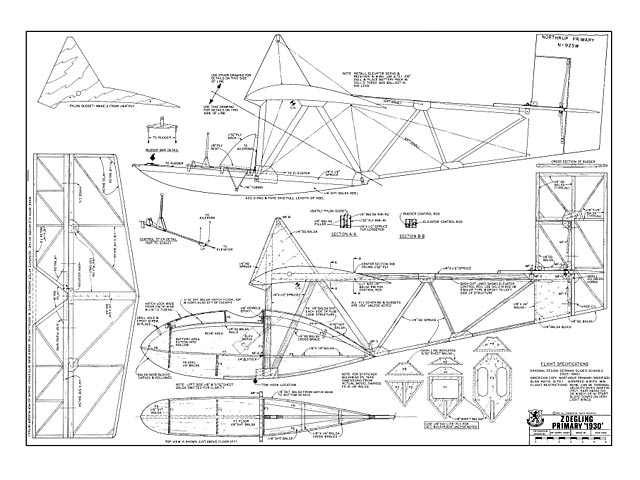 Quote: "For some reason, this crate from the 1930's seems to have a nostalgic pull on people's emotions, quickly drawing a crowd wherever it is flown. With coupled rudder and ailerons, it turns in about a ten foot circle, finding even the smallest thermals after leaving the high start. On the slope, and flown at eye-level, the tail goes up and it lazily scoots along, following the cliff contour. The speed is the same flat out level or straight down - slow!

Super-super efficiency is the keynote for the age! Sailplanes for RC'ers are ever faster, fly farther, go higher, are more graceful and ever so fantastically beautiful! ... Ho hum.

Comes now another approach to the A/C Glider aficionado: slower, shorter, lower, dirty, cluttered and very, very ugly! Wow, man, its so ugly it is actually beautiful. I guess its kind of the way I feel about the Iguana Lizard: down the ugly scale you will finally arrive at beautiful again. No?

To own the Zoegling Primary Glider is to fly in a completely different ballgame. First, there is no pressure on the pilot because everything is slowed down. There's worlds of time for thinking about turns and whatever you are planning next. Slow and ugly - great! About the only distraction you'll get with this bird is the huge flock of spectators. Sometimes we forget that to the uninitiated, the great big beautiful twelve foot span bird hundreds of feet high thermalling, or above the slope, is not enough for their interest. Not so the lowly Zoegling: for it is usually flown at eye-level on the slope and very commanding as it scoots back and forth like a pylon racer in slow motion.

From the dim past comes the semi-scale German Zoegling. Old notwithstanding, for the new or experienced flyer, this model is satisfying in our times. Nothing else quite captures the thrilling sound of wind whistling through the rigging wires. Little is so rewarding as wheeling into thermal turns a little wider than the wingspan. And how many other designs can find a thermal at ten feet of altitude and work it across the flying field? Comforting also is the fact that this weird bird is strong. Once I hooked a wingtip landing and merrily cartwheeled from wingtip to tail to nose and over again before stopping. Damage? None. No sireee! With all those rigging wires, everything yields just enough to absorb the goof-off.

And why did I pick the Zoegling to build? That is a story. Back in the nineteen thirties, the art of gliding was new and raw and so was I. Thermalling had not yet been discovered and our soaring was a series of eights cautiously flown on strong slope winds. Most of the flying machines then were the open type primary designs modified from the original Zoegling of the German Gliding Schools. In the USA, it was quickly modified and re-named the 'Northup Primary.' During this period, I was fortunate enough to have built and flown my own.

While gliding here was for sport, the training of pilots ten to fifteen years of age in Germany was a deadly serious pursuit. Stripped of the ability to bear arms or to have an Air Force by the Geneva Convention, Germany quietly set about building a super-supply of skilled pilots via the glider training and sailplane route. Many of the German youngsters who learned to fly in the Zoegling also had a hand in its construction. Can you imagine the wonderful stimulus to fly and build with integrity?

From the Zoegling trainer to the sleeker sailplanes soaring on the Rhon and Wasserkuppe slopes, the youth gained extreme proficiency. Thus it was that the old Zoegling was built and flown in great numbers.

So here was I one day in December with a fine, open primary glider easing my way off auto-tow towards the Palos Verdes Cliffs in Southern California. Always before my flight had been over the cliffs, one quick and careful turn and then scoot back to a landing. But on this day, when I made my turn, the updraft kicked my bottom and 1 felt the glider surge upwards. I was soaring!

For two and a half hours, I shuttled back and forth above the cliffs, happier than I'd ever been. I was dressed in light clothing, clutching the seat bottom for security against the primary's nakedness and, despite the bitter cold and whistling wind, reveling in my first soaring experience. When I finally landed, my crew had to pry my stiff and blue fingers off the control stick! It was hours before I could stop stammering and describe the emotional impact of soaring flight. Many years later when I had earned FAI Badge Silver 'C', I would recall that moment. It was the greatest!

After my soaring flight, and the fact that then I was an "expert," the next step was to hop up the Primary. This we did by adding an enclosure for the pilot. Technically, this made the Primary a 'Secondary Glider.' Actually, it was still the same old beast that flew the same, but was a heck of a lot warmer when soaring!

So how did the model come to be? Okay, for the past few years I'd been flying my own sleek R/C sailplanes on those same cliffs as my first soaring ex-perience. One day I showed another RC'er an old photo and he said: What a great model that would make! Really? Why was I surprised? You know the rest of my reactions: The gastrointestinal feeling as you contemplate structure and design then the wild ride to the hobby shop for a supply of balsa and glue. I've built many scratch machines before, but this time the fun of building and flying was so much that after a year, I built another, improved version offered herein.

Are you sold? Can't you feel that nostalgia? Okay, let's start building..." 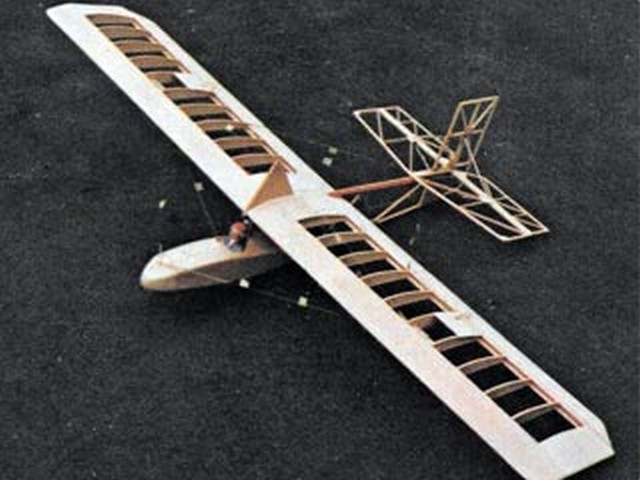