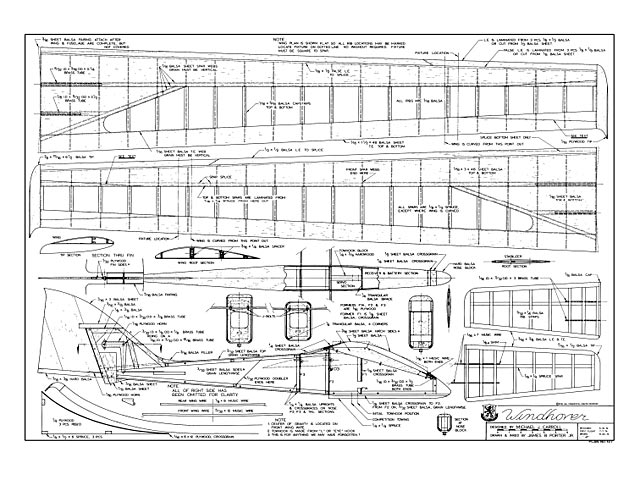 Quote: "If you're looking for a sport and competition sailplane that's out of the ordinary, Mike Carrol's Windhover is for you. This 99 in span machine features elliptical wing tips, a short coupled fuselage, all-flying stab and magnificent performance. Sufficiently stable for the novice, it can challenge the potential of the most seasoned contest pilot.

For many years construction articles have tended to fall into two categories, sport or competition. The former included all manner of cumbersome contraptions, sporting gaudy decoration and folksy invitations to docile Sunday afternoons, while the latter advertised themselves as the ultimate answer to the competitor's needs. Windhover belongs to neither of these categories. It is not a novelty nor is it a guarantee of winning, it is simply an honest, rugged, and attractive Standard Class sailplane.

The name is taken from a Gerard Manley Hopkins work, a poem entitled 'The Windhover.' Hopkins' subject is the European Kestrel, and it is my hope that those who have seen my Windhover in flight will agree that it demonstrates the grace and beauty of both the bird and the poem.

I am no aeronautical engineer. Rather, I am a reasonably proficient modeler who derives the maximum enjoyment from turning a stack of sheets and sticks into an aircraft which is uniquely my own. While I enjoy competition, neither am I an all-out competitor. My fascination with modeling stems directly from the fact that I have never lost that childlike wonder at watching things moving through the air. I suspect that I share that wonder with at least a fair percentage of my fellow modelers.

Many of Windhover's design features do not originate with me. The short coupled fuselage and elliptical tips were simply scaled down from Jim Porter's 16 ft Shrikes. The flying stab construction was stolen from Mark Smith's Windfree (oz1637). In fact, the only technical feature in the whole airframe which I'm certain l thought-up is burying the elevator control horn in a 3/16 thick sub-fin, and undoubtedly someone has already done that. too,

Before we move to the construction sequence, 1 should add that my original Windhover is now well into its second full season of sport and competitive flying. The prototype, which Ed Harris built from the plans for this article, has also seen extensive use. At no time during the hundred plus hours which these ships have logged has either of them exhibited anu unstable or idiosynchratic flight characteristics. Both aircraft flew well right off the board with only minor ballast adjustments necessary..." 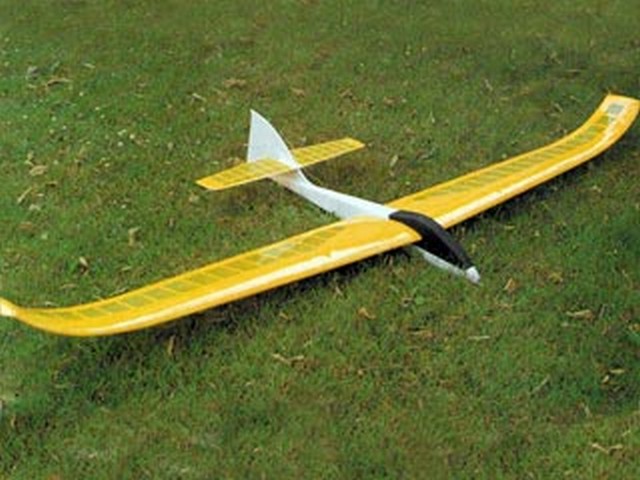 Hi looking at plan for the windhover, unless my computor is acting up arent there supposed to be rib outlines on the plans.
andrew dapolito - 24/06/2019
Um, no. The article explains in great detail how to make the ribs from those two given templates (tip section, root section). It's quite a common method. Sandwich, then sand.
SteveWMD - 24/06/2019
Add a comment