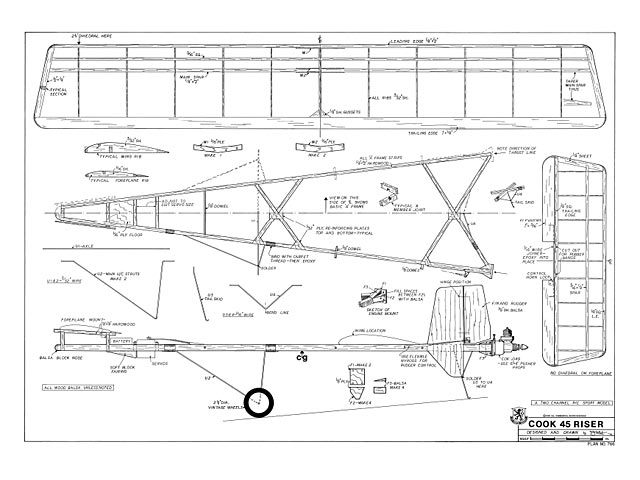 Quote: "Jack's twin pusher will set you aside from the rest. Once it's airborne, everyone will want in on the act. Be the first at your field with the Cook 45. By Jack Headley. Introduction by Dick Tichenor.

Some of us senior citizen types have fond memories of building and flying 'A' frame rubber powered twin pushers back in the early 1930's. To commemorate the 50th model airplane Nationals in 1977, Bert Pond published a dandy historical book on the Nets, AMA, etc. Included in the book were several blueprint style plans for antique models. Among them was the Cook 45 Riser.

The Cook 45 established a duration record of 134.4 seconds and a distance record of 1,698 feet in 1915. It was one of the few twin pushers that featured a landing gear. Since receiving that book there has been a gnawing desire to see an R/C version of the Cook 45. For the purists, we admit taking several liberties in the interest of practicality. For instance, the original used 39 in long frames and we used 36 in length because it was handy from our local hobby shop. Rudders were added for directional control, the original flew in a straight line. At any rate this R/C version represents the general style.

Jack Headley sort of did a number on us. For reasons known only to Jack, instead of shooting black and white photos of the Cook 45 in flight, he chose to shoot movies. He has shown us the movies, which thoroughly excited us, but we have no flight shots for our readers. Believe me, it flies great and I promise that you will be a sensation at the field when you take yours out to fly.

This whole project began during one of my irregular visits to HQ in Sierra Madre, when I was trying to convince Dick Tichenor that the next issue of R/C Modeler couldn't possibly be published without my latest project being included. Somehow the splendid arguments I put forth regarding my single channel version of the Dornier Do. X (with 12 electric motors) fell on deaf ears..." 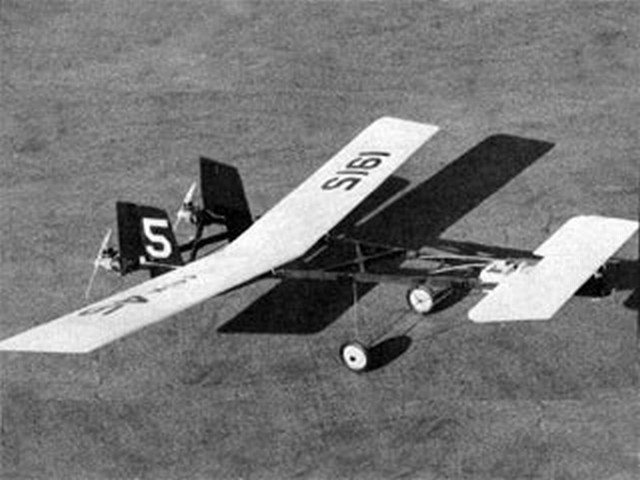