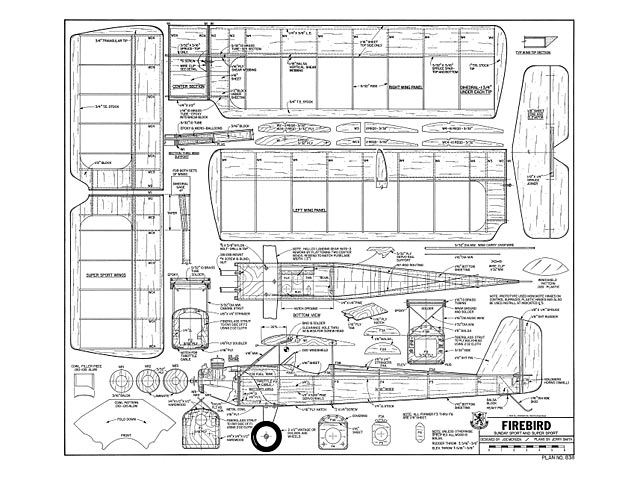 Quote: "Two for one - well almost. Firebird is certainly two airplanes. The flight characteristics of the full span wing and the clipped wing versions could hardly be more different. And all for the price of one very small and simple wing which can be substituted on the spot for the full span wing in forty-five seconds without tools.

So, if it is a lazy Sunday afternoon and you have just enough pep left to fly, slip on the full span wing and relax with a docile, stable, but responsive Sunday flier.

If competition appears you land, refuel, remove the full span wing, slip on the clipped wing and hold your own in any pylon race or three channel aerobatics contest in the aircraft class. Don't let the parasol design fool you. It’s a very fast, adroit little bird with the clipped wing.

With the full span wing. Firebird will glide at 15-17 mph and true out at 45 mph at full throttle. With the clipped wing it has been timed at 61 mph. While on the subject of performance the OS Max 10 FSR engine swinging the usual 7 x 4 propeller gives excellent ROG performance with either wing on a not too smooth sod field. In fact, the prototype has never been hand launched.

With the full span wing any three channel maneuver is easily accomplished. Cruising is comfortable at approximately one third throttle. With the clipped wing, Firebird is an aerobatic airplane. In a fast roll it performs as though on a tight wire passing through the fuselage centerline with rudder input only. However, the airplane is very stable in all modes and forgives almost everything but a heavy hand.

When wings are changed no other change is necessary except a possible trim adjustment when airborne which is well within the limits of the trim levers of your transmitter.

The design of the airplane started, as many R/C models designed by oldtimers do, with memories of Heath Parasols. Long Longsters. Corben Baby Aces, Pietenpol Air Campers, etc. So many shapes got built-in that, at one time, the writer considered naming it a Helocopi using the first two letters of the names of Heath, Long, Corbin, and Pietenpol. Another not too bright idea was to call it a Heathenpol. Any such combination seemed a little cute and, after flying the first time with the clipped wing, the name Firebird seented most appropriate, so that is what it became.

With its small engine, low fuel consumption, and overall low cost combined with outstanding performance and versatility, it would take some doing, in the writer's opinion, to get more practical flying and fun per dollar than with Firebird.

Construction. Firebird is admittedly over-built in some places to take a 'trainer beating' and keep flying. Most construction is pretty standard with the possible exception of the eabane struts and engine cowling. The wire cabane struts and center section attached to the fuselage by being 'fiberglassed in' have proven to be very rigid and almost indestructible.

The aluminum cowling was chosen because, in the writer's opinion, it comes close to looking like the old single curvature cowls of the Heaths and Pietenpols. If you don’t subscribe to this, a carved balsa cowling will work just as well.

The finished airplane should weigh somewhere between 30 to 35 oz. The prototype came out at 33 oz with the clipped wing, and 35 oz with the full span. These weights are with Futaba radio gear using S 18 servos, a 4 channel receiver, a 500 mah battery pack and, of course, the 2 oz fuel supply. With smaller radio gear it should be possible to get well under 30 ozs.

The wings and empennage are about as simple as anyone could get and therefore are not covered more fully by construction photographs. 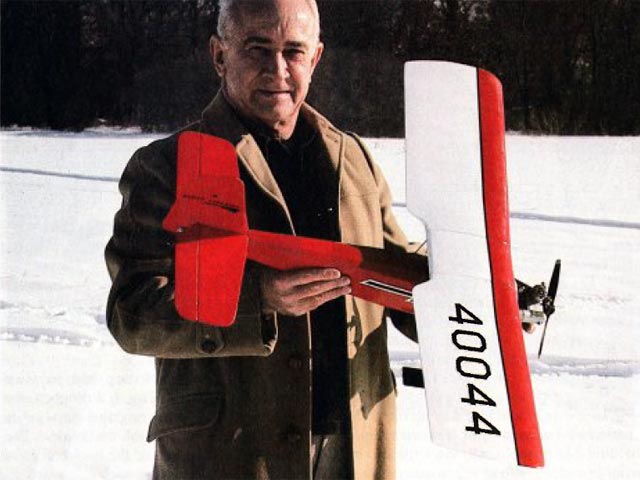 Nice looking model but I found it difficult to fly. Soon after learning to fly RC I built one but it went out of control and crashed, damaged beyond repair. My lack of experience probably contributed but I suspect that it also had some nasty flying characteristics.
Fred - 07/09/2021
Add a comment