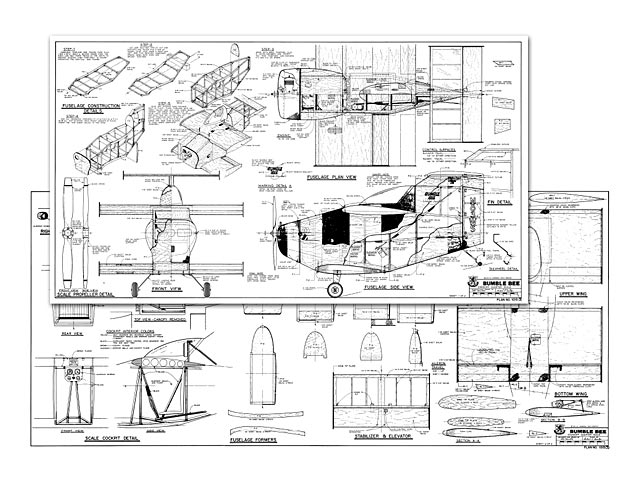 The full scale Bumble Bee was designed, built, and flown by Bob Starr. The objective of the design was to attain the title of the world’s smallest man-carrying aircraft. That title previously belonged to Ray Stits’ Skybaby which was flown by Bob Starr in the early 1950s.

As you regular readers know, I designed and flew a Quarter Scale model of the Skybaby, after over two years Of frustrating failures, and the design was published in the June 1986 issue of ROM. It was during the early flight tests of the Skybaby that I heard of the Bumble Bee’s successful flights,

and contacted Bob Starr in Tempe, Arizona, regarding a Quarter Scale Bumble Bee. He was enthusiastic about the project, and we spent many hours together, during which I took many photos and measurements. This construction article for building a Quarter Scale model of the Bumble Bee is the final result of all that activity. My Quarter Scale model is strictly a stand-off scale job, with no cockpit detail. I wanted to assure myself of its flyability, which turned out to be touchy but reasonable. The photos of the full scale job along with the 3-views on the plans, will assist any of you scale enthusiasts in the event you want to add more detail.

The full story of the Bumble Bee and the Skybaby is a totally fascinating tale of two men and their professional relationship, which is so engrossing that it will have to wait to be told at another time perhaps in another magazine, since it really has nothing to do with radio control models. However, if you R/C enthusiasts indicate enough interest in an article about full scale airplanes, we might tell the story in RCM at a later date.

I get a certain sense of deja vu in publishing the Quarter Scale Bumble Bee. Just as in the case of the Skybaby, by the time I'd flown the Bumble Bee another airplane laid claim to the title of world's smallest man-carrying airplane. Don Stits, who is Ray's son, designed and built a small airplane named the 'Baby Bird'. The Baby Bird has a wingspan of six feet, three inches, compared to the six foot, six inch span of the Bumble Bee. However, the Baby Bird is eleven feet long, compared to the Bumble Bee length of nine feet, four inches, and there are other differences.

The Bumble Bee has flown at altitudes of 3000 feet, circling the airport, while the Baby Bird has only made short straight line flights at 15 to 25 feet above a runway. The Baby Bird is also limited to a 140 pound pilot. Another difference is that the Baby Bird is a high wing monoplane. In any event, Baby Bird's claim to the title, as it appears in the Guiness Book of Records, is recognized in the British edition, and is 'in dispute' in the American edition.

It all leads to another interesting point to be discussed at some other time. What is the definition of the world's smallest man-carrying aircraft? Wingspan? Wing area? Wingspan plus length? Plus height? See what I mean?

So much for background. Let's get on with the construction of the Quarter Scale Bumble Bee. To begin with, let me say that it is a lot easier to build than the Skybaby, primarily because of the truss and box structure of the fuselage, and the rectangular wings which lend themselves to foam core techniques. So does the cowl and the cockpit canopy simulation. True, there are some tricky details, but this is not an airplane for a beginner..." 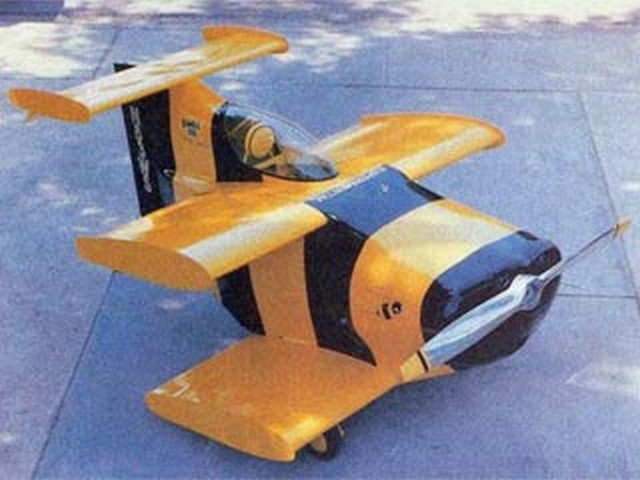 Here are some pics of of Ken Willard's and Bob Starr's Bumble Bee 2, super sized up to 80 percent scale using the RCM plan made from cardboard as its primary construction.
MaryPyle - 23/12/2018
Add a comment