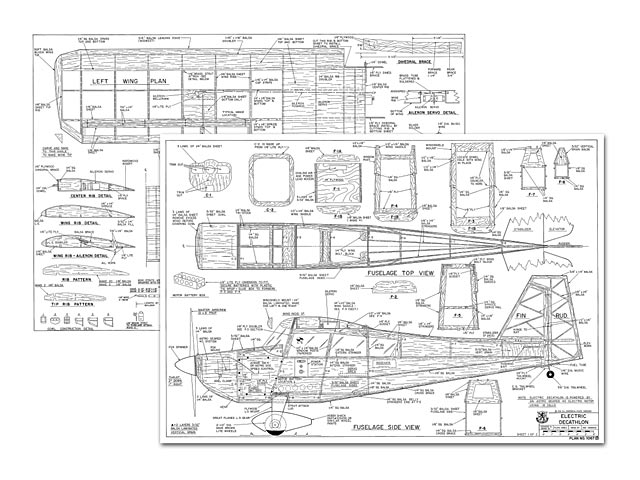 Quote: "This electric Decathlon will turn in the full aerobatic routine that Duane Cole's did. By Floyd Manly.

My introduction into electric flight was about 10 years ago when I did a product review for a magazine on one of the then available kits. To say that I was not impressed is a gross understatement. It was a toy, like a Cracker Jacks prize, in the sense that a grown man was embarrassed to admit that he played with it. I tried to write glowingly about something that I was eager to get rid of, and failed miserably. The review was never printed.

That was almost 10 years ago, and I harbored these impressions about electric flight until I happened to see a Graupner UHU performing at a fun-fly. The very next week, I saw a Great Planes Electro-Streak being put through its paces! Wow, these were electric birds that FLEW - with capital letters! Not just floating around like overstuffed sea gulls, but flying like hungry eagles. I had to buy one of each. That started the old juices flowing again. The enthusiasm was back, and I was having fun again. After all, the real secret to staying young is being too busy to think about it.

I first heard the axiom 'The man who dies with the most toys, wins' from Dave Platt. You know him. He's one of our leading R/C Scale builders, and a kit manufacturer, who also 'plays' with rubber power free flight aircraft, because they're fun! It's important that this hobby be fun! A magazine editor recently told me that model aircraft once got to be a drag for him. He cured his doldrums by starting on a model that was so completely different than anything he'd ever worked on that he had to learn a whole library of new stuff, just to get current on the latest technology. He found he was having fun again.

Electric power is doing that for me. I pulled all my old issues of R/C magazines, and re-read again everything I could find on EP. I wrote to almost every supplier and manufacturer to request information. It was when I began looking for available models to build, that the fog started to lift, and I saw that there just wasn't really that much to be had. Sure, a couple of floaters and trainers are here, but nobody had much of a selection of hairy chested aircraft.

It was at a full size air show on the 4th of July that world famous acrobatic performer, and entertainer, Duane Cole, put in a dazzling performance with his full size Decathlon. The decision was made, right there and then in the hot Arkansas sun, to have a Decathlon, and to make it Electric. Not the floating 05 size (as they call them) but a full throated Astro 40 geared Cobalt!

More research and a couple phone calls to the Guru of electric flight, Bob Boucher at Astro Flight, led to the size and weight design parameters of the Decathlon-E. Existing fuel powered versions of this aircraft were just too heavy, and slightly smaller than what I calculated necessary for optimum performance, so sketches were made of the outline and major structural components, and work was started. The vital statistics worked out as follows: Wingspan is 73 in, with a chord of 11 in. Ready to fly weight scaled in at 7 lbs 4 oz, so we came up with a wing loading of 20.83 oz/sq ft. Not too bad! It should be light enough to stay up with less than full power, yet be heavy enough for penetration into aerobatics.

Construction. Wing/Stab: Your job will be much easier if you take the time now to make yourself a rib template. Cutting one from thin aluminum, if you have any, is best. If not, make the template from 1/8 plywood. After sanding it to the final shape, coat its edges with CA glue. The CA hardens the wood so your knife won't shave off slivers as you cut each rib. Other modelers may be able to stack 15-25 ribs and cut them altogether on a band saw, but I've never had any success with this method. I've always finished up with some weird tapered shapes. I cut each rib separately, then I stack them for sanding down to final shape..." 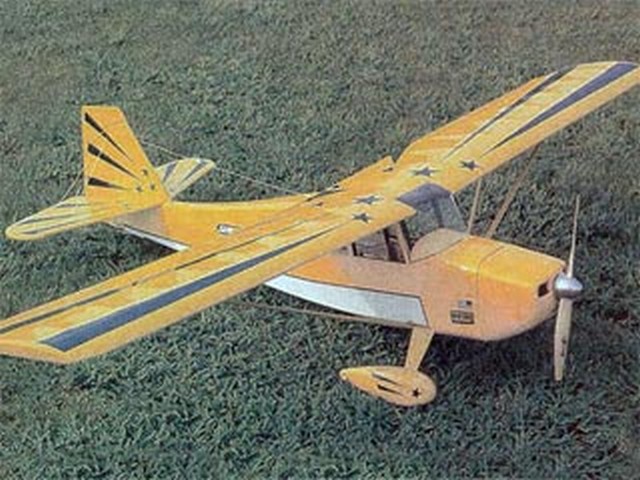